Around the Bloc again: The renewed militancy of Quebec sovereignty

With shrinking coffers and membership, the Bloc Québécois is returning to its militant roots to fight for sovereignty—and survival 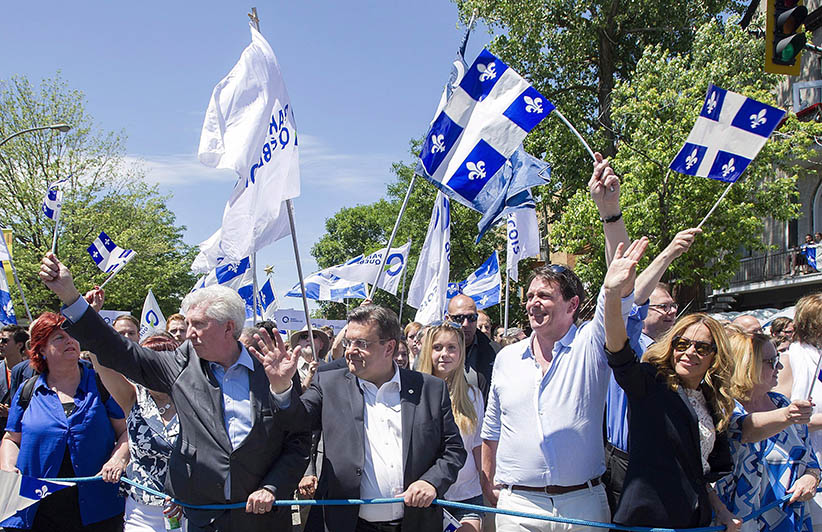 When he launched what would become the Bloc Québécois in 1990, leader Lucien Bouchard saw the party as necessary only to ready the rest of Canada for Quebec nationhood. “We are going to Ottawa to defend and promote the sovereignty of Quebec,” Bouchard said at the time. Yet, two decades later, the Bloc was the picture of Ottawa establishment, with the longest-serving MP on the Hill and a raft of its politicians serving on Foreign Affairs and National Defence committees, among many others. Political expediency dictated that representing Quebec as a whole was more important than just propping up its sovereignists.

No longer. Since its crippling defeat in the 2011 election, in which it returned just four MPs to Ottawa, the party has struggled to present a compelling narrative to counter the NDP, the main beneficiary of the Bloc’s misery. With the return of leader Gilles Duceppe this past June (he resigned in 2011), the party seems to have found it by returning to its roots as a sovereignist rallying point.

In the years since Bouchard’s reign, the party was able to convince many federalist Quebecers to vote Bloc, if only because it was the only party to “stand up for Quebec’s interests,” as the 2011 campaign slogan went. Apparently, those votes are today unnecessary or unattainable. In his speech marking his return to politics, Duceppe said he would work hand-in-hand with the Parti Québécois to “rally all the independantiste forces.”

In May, Bloc members voted in a declaration of principles that said, in part, the party “no longer has a reason to exist” following Quebec independence. The party launched a “permanent campaign for independence,” a door-knocking initiative to sell Quebecers on Quebec sovereignty, the following month. Duceppe himself has ceased referring to his political opposition by name, lumping the Conservatives, the Liberals and the NDP into one gormless blob he calls the “Bloc canadien.”

“There is clearly more direct language with the Bloc now than before,” says Bloc MP Louis Plamondon, the aforementioned longest-serving member of Parliament. “We have to put sovereignty back into our vocabulary. The militant base, those 41 per cent of Quebecers who say they would vote ‘Yes’ in a referendum: That’s who we’re going after.”

The move is part ideological, part realpolitik. Many of the current flock of Bloc candidates in the next election were recruited under former Bloc leader Mario Beaulieu. A a sovereignist firebrand with questionable political instincts—in a 2014 newspaper column, Duceppe suggested Beaulieu was “giving space to rednecks” within the party—Beaulieu nonetheless endeared the Bloc to rock-ribbed paleo-nationalists before ceding the party leadership to Duceppe. The Bloc’s newfound militancy comes in the wake of a similar shift within the Parti Québécois under leader Pierre Karl Péladeau, who questioned the Bloc’s validity last November before changing his mind.

Given its numbers and financial prospects, the Bloc can scarcely focus on anyone but nationalists. After several defections (and one recruit from the NDP), the Bloc will go into the next election with only two elected MPs. Its membership rolls—about 20,000, according to Plamondon—are half of what they were in 2011. Its organization is stretched thin, even in former Bloc fiefdoms such as Joliette.

And though Duceppe won’t likely admit it, the NDP has endeared itself to many Quebecers, including many nationalists. Perhaps the best compliment one can pay to the NDP in Quebec is that it has become the de facto protest vote in the politically restive province.

Finally, the Bloc’s ability to proselytize beyond its traditional base has been severely curtailed with the elimination of the per-vote subsidy this year. Between 2004 and 2014, the Bloc received nearly $25 million in federal funds. It must now rely on its own fundraising efforts, which, in 2014, amounted to just over $425,000, according to Elections Canada data.

When he co-founded the Bloc, Bouchard said the party was built to disappear; he warned of it becoming “part of the furniture,” should it remain in place for too long. Twenty-seven years later, the party is apparently still trying to disappear. Yet, with a referendum on Quebec sovereignty nowhere on the horizon, and with it having to fight to recruit even the most strident Quebec sovereignists, the biggest threat to the Bloc’s existence remains the ballot box.