Art imitates life as Maclean's inspires 'The Darling of Kandahar' 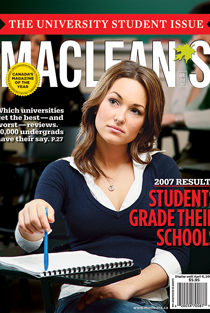 The start: The cover, featuring Ilyes, and a report on the death of Karigiannis in Afghanistan

It all seems strangely inevitable, given the endless cycle of self-reference in modern literature (and media). First, a young woman in Toronto, Kinga Ilyes, has her photo appear on the cover of Maclean’s April 2, 2007, University Student issue. Sgt. Christos Karigiannis, a Canadian soldier in Afghanistan, sees it a month later and writes the magazine a (politely) appreciative letter about “the extremely attractive young lady.” The media knows a feel-good story, arising from a situation that is always in sore need of one, when it sees it. Newspapers reprint the sergeant’s letter and flash “Darling of Kandahar” headlines. Maclean’s dispatches another photographer to Ilyes, and this time a reporter calls too, to ask a few details about her life.

A few weeks pass, and it’s no longer a cheerful story: the soldier, like so many other Canadian troops before and after him, is killed by a roadside bomb. The young woman, shocked and saddened, withdraws from the public eye. Five years later, Montreal author Felicia Mihali publishes a novel, The Darling of Kandahar, about a girl whose picture appears on the cover of a magazine called Maclear’s—the standard phrase “lightly fictionalized” hardly describes the alteration of a fraction of a single character—and catches the eye of a soldier in Afghanistan. The cycle begins anew, but this time a Maclean’s reporter phones Mihali.

The prolific and multilingual novelist—three books in Romanian, seven in French, plus Darling, her first in English—has been in Canada since 2000. Mihali, 45, already spoke French when she arrived in Montreal from southern Romania. In 2007, after years of study, she was just becoming comfortable in English when she read the story of Kinga and Christos in Maclean’s—the publication she had adopted as her window into English Canada’s psyche. What first captured Mihali’s attention was that Ilyes was born in Romania. “People are always talking about Romanian women,” she says laughing, “but they don’t often say we’re beautiful. I felt a little touch of national pride.”

It was the sudden, wrenching turn in the story, though, that held her. “It became a strange, dark matter with his death, and then his funeral was in Laval, near where I live.” Mihali attended and was moved by the ceremony. “Now as a writer, I couldn’t not write about this.” And she would do so in English, partly as a “final exam for my English” and partly because the war in Afghanistan has, Mihali says, received so little coverage in French-language media. “In Quebec, despite all the Québécois soldiers, people seemed to think it was an English-Canadian affair.”

Her protagonist Irina is, like Kinga Ilyes, 24 and born in Romania of Hungarian heritage. Unlike Ilyes, a Toronto resident who was doing some part-time modelling when she appeared on the Maclean’s cover, Irina—an amiable drifter—was picked out of a small group of students on her unnamed Montreal campus by a photographer who asked if she wanted to pose for the cover of a national magazine. When she returns to her friends and they ask how much she was paid, “I let an Ah! of surprise escape, because it had not occurred to me to ask for money.”

The first letter from her Kandahar soldier—Yannis (for John the Baptist) rather than Christos (for Jesus himself)—jolts Irina into deeper self-awareness. Yannis asks Maclear’s to thank her “for being who she is,” exactly as Karigiannis wrote about Ilyes. “I did not know myself well enough,” Irina later recalls, “to be happy with that.” So she’s intrigued enough to reply, after the story veers entirely into Mihali’s fictional territory, and Yannis emails her directly.

He writes about his identity and mission as a soldier, and about the situation that confronts him and his comrades: “We cannot go back before getting proof that we did something worthwhile here, and the longer we stay the harder this is to bear, as change is not noticeable at all.” In Irina’s mind it’s reminiscent of the founding of Montreal—another long, slow and painful attempt to export Western values to a foreign land, in the absence of real commitment in the home society.

In the end, Yannis Alexandridis dies just as Christos Karigiannis did. The story of Kinga and Christos meant his was a death far more newsworthy than that of most Canadians there. Kinga Ilyes, who was stunned to learn that she and Karigiannis had become the inspiration for a novel, was in Europe shortly after his death: “I saw my picture in Romanian newspapers, and my inbox was choked with messages when I came home.” But it wasn’t long before Karigiannis faded from the news cycle; it’s been almost five years, Ilyes notes, since the media last called her. The situation is much the same in Darling of Kandahar, where Irina continues to talk about their story to anyone who asks, aiming to keep the cycle ever renewed.