'You inhale the world around you'

Vera Frenkel has been crafting multimedia artworks since the 1970s, but you might never guess their inception dates by the very contemporary concerns and observations they address. She’s unpacked how we wield language to express ourselves, but also how our language entraps or alienates us; she plays around with fiction and reality while cheekily refusing to pin down which is which; and she’s fascinated by how we construct our identities, and how the technology through which we communicate shapes us. “I don’t think of myself as prescient,” she says. “I just think that artists of a certain kind have antennae, and you just inhale the world around you and give it a shape.”

FROM THE ARCHIVES: Maclean’s reviews the National Gallery of Canada’s 100th anniversary celebration exhibit in 1980

A glance at her biography reveals the deep, personal roots of these concerns. In the early days of the Second World War, Vera’s mother fled Czechoslovakia with her infant daughter, aided in part by German soldiers who didn’t realize the family was Jewish. Mother and daughter were reunited with Vera’s father in London, where he was deep in mourning, believing his family had been killed. The family eventually settled in Montreal when Vera was 11, and she lived in the city until moving to Toronto as a young adult.

One of her most recent works, a 2012 multi-channel video piece entitled “The Blue Train,” revisits one of her favourite childhood bedtime stories: she was forever begging her mother to retell the story of their escape. “I am an immigrant, daughter of immigrants,” Vera says. “And growing up with the history of the impact of the Second World War on my family—essentially destroying the extended family—I’m probably programmed to be particularly sensitive to social issues.”

Another of her most well-known pieces, 1992’s “…from the Transit Bar,” immerses gallery visitors in the disorienting experience of being a newcomer on the move. The work is a full-sized, functioning bar—complete with tables and chairs, a piano, a professional bartender and a few drinks on offer—interspersed with six video displays of people telling their stories of migration, whether forced or by choice. Their speech is dubbed into Yiddish or Polish and then subtitled in English, French or German, all of it randomized and controlled by laser disc technology. The net effect, for visitors, is landing in a place where you understand only tiny snatches of conversation, but Vera also aimed to create a social space where you might reveal more of yourself among the anonymous safety of strangers than you would at your neighbourhood watering hole. The work now resides in the permanent collection of the National Gallery of Canada. 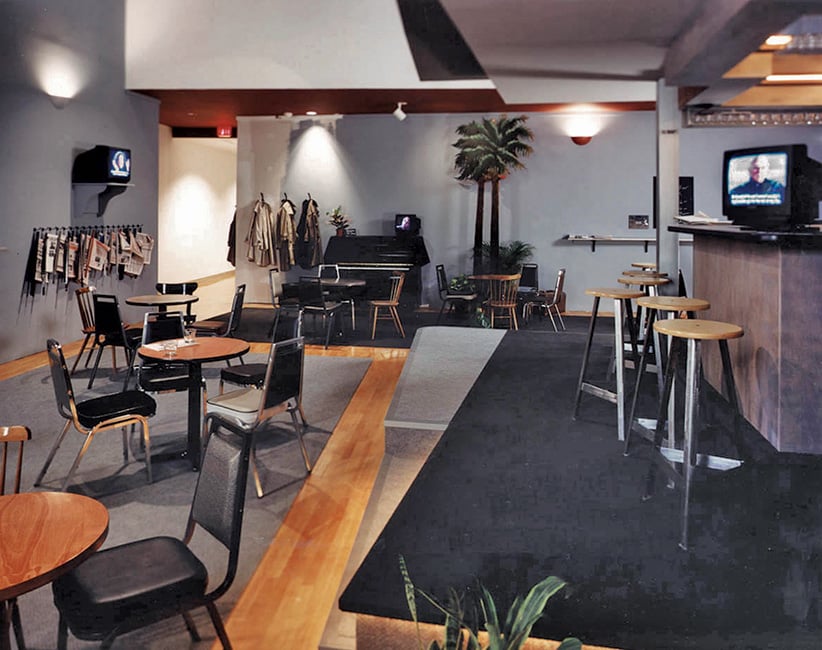 Frenkel’s “…from the Transit Bar” is a six-channel video installation, with functional piano bar, and resides at the National Gallery

Underlying much of her art is the playful rebelliousness of an outsider negotiating her place in Canada and in the art world, and the works are imbued with the palpable warmth of the artist’s own personality. “If you grow up with the idea that it’s a miracle you survived at all,” says Vera, “it means everything else you’re experiencing is a bonus.” — Shannon Proudfoot