As B.C.’s wildfires raged, these sheepdogs stayed to protect their flock

When fire forced the owners of a 100 Mile House ranch to ﬂee the B.C. interior this summer, their two Maremma Sheepdogs stayed behind with their 89 charges 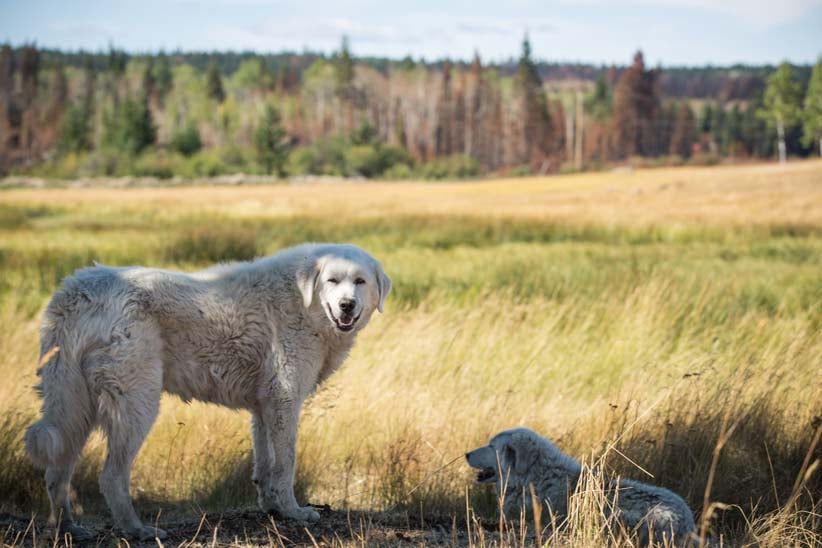 Tad and Sophie aren’t the kind of dogs who will run up to house guests in hopes of getting a pat on the belly. They aren’t sleeping at the foot of anyone’s bed. As Maremma Sheepdogs, an Italian breed developed to guard livestock, their duty is to protect nearly 100 sheep on the Sandhill Lea Ranch near 100 Mile House, B.C., where wolves, bears and, most of all, coyotes lurk in the bush, hoping to attack the ewes.

Tad has chased off coyotes. Sophie has scared off wolves. And if a bear even steps foot in the direction of their sheep, the two dogs weighing about 100 pounds each won’t back down. “We’ve seen Tad barreling down ﬁelds after a bear and the bear take off,” says Lynn Landry, the dogs’ owner. “A bear will clear a fence and leave if those two are chasing it.”

The occasional confrontation aside, it’s a pretty good gig for six-year-old Tad and 12-year-old Sophie—what with plenty of meals and acres of land to roam. But their job became demonstrably harder in early July when wildﬁres forced their owners to evacuate—leaving the two alone not only to protect the herd of sheep from predators but to save themselves from the elements for several weeks.

MORE: Does your dog know what you are thinking?

Lynn and her husband Lorne were entertaining guests on July 6 when word came about a ﬁre in the distance. They could see the plume of smoke, but no one was particularly worried. Helicopters and water bombers were attacking the ﬁre and everything seemed under control. Then dusk started to fall, the ridge went up in ﬂames and the Landrys knew they had to get out. They packed up a few necessities, as well as their border collies, but Tad and Sophie were already in their night pen by the sheep as a police cruiser came down the driveway to inform them they had to get out.

The Landrys attempted to return home the following day—to open up some bags of dog food, if nothing else—but police wouldn’t let them pass the roadblocks. On July 8, they were granted a one-hour pass, just enough time to open the gates in the ﬁeld to give the livestock about 40 hectares of land to roam in case smoke and ﬁre encroached. A nearby lake would sufﬁce for water. The Landrys then ripped open a 35-pound bag of dog food and left it by the barn—an all-day, all-you-can-eat buffet for Tad and Sophie—and were on their way.

“It was terrible to leave, but they warned us: one hour,” Lynn says. “We couldn’t take 89 sheep with us—and Tad and Sophie would never leave the sheep. We knew if there was a chance for them, it’d be to wander the entire area. And they could go down to the lake if it got really bad.”

Now they could only hope their animals would survive on their own. Lynn and Lorne spent the ﬁrst few days in 100 Mile House, but were later forced to evacuate to nearby Lone Butte. It soon got too dangerous there and the couple left for Maple Ridge, B.C.

MORE: Where did dogs first appear? Scientists have a theory.

Every day, they applied for a permit to visit their farm—to get their animals more food, to make sure everything was okay—and every day they were denied. That is, save for a lone 10-minute visit with a forest service escort, just enough time to open another bag of dog food and notice that the neighbours’ homes on either side of them had burned down. Somehow theirs was spared.

“There was no power, but the sheep and the dogs were alive,” Lynn says. “There were lots of hot spots and helicopters getting water out of the lake. It was like Armageddon.”

Days went by, and news would trickle to the Landrys. A helicopter spotter called them out of the blue to tell them he’d seen their sheep roaming about. A volunteer from the Canadian Disaster Animal Response Team dropped by to open up a third bag of dog food. Weeks later, when the ﬁre started to die down, a pair of forest service workers stomping out hot spots were having lunch on a log when one of the dogs swung by to check in on the latest strangers to come through. “You knew if the dogs were alive, the sheep were ﬁne,” Lynn says. “We just have no idea where they went or what they did for 20 days.”

When the Landrys ﬁnally got clearance to return home on July 24, they found the animals all alive, save for a single missing ewe, who ﬁgured to be the only casualty. Tad greeted his owners with the look of “where have you been?” Lynn remembers. He was covered in ash, his eyes were red from smoke and his feet were black with muck from walking in the lake. Sophie, meanwhile, didn’t run up to greet her owners the second they returned, Lynn says. “She was staying with the sheep—doing her job.”

Tad and Sophie at work: 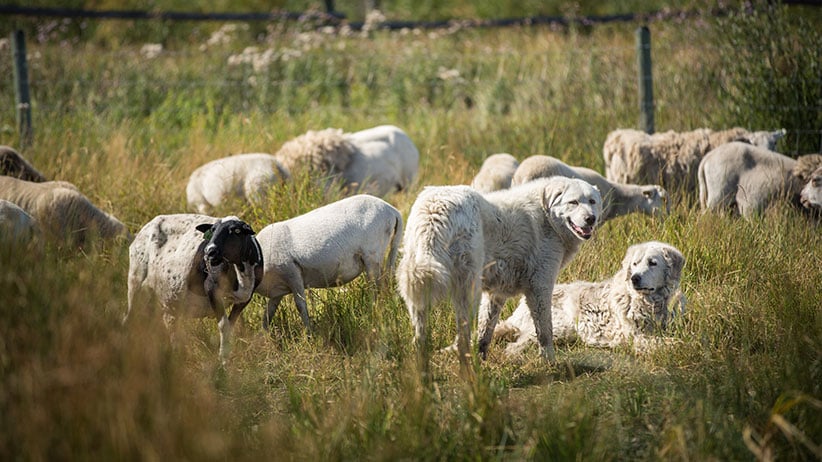 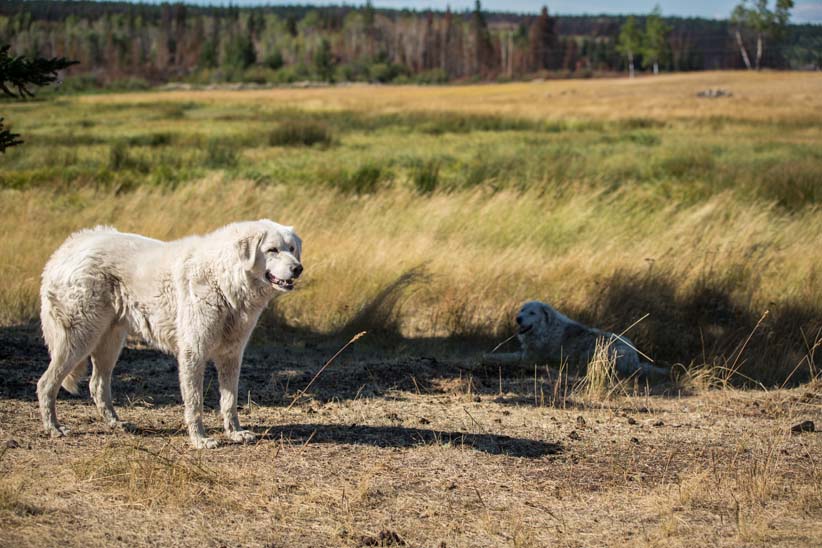 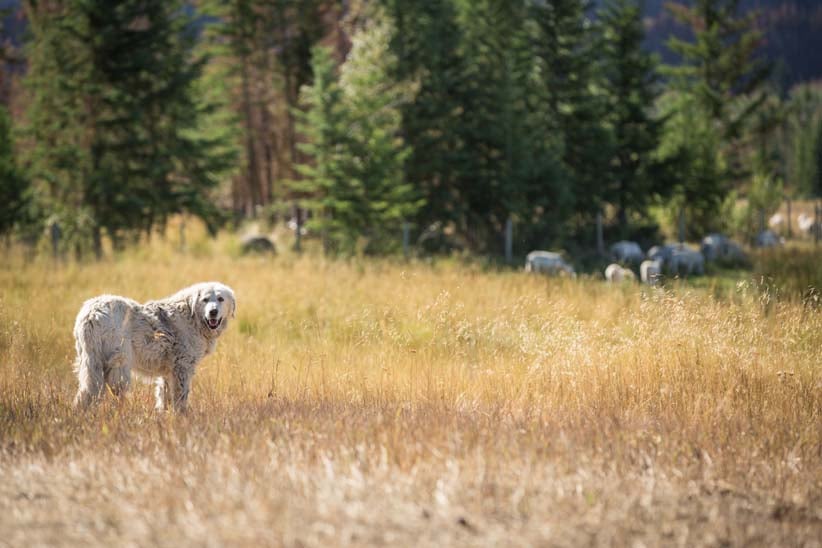 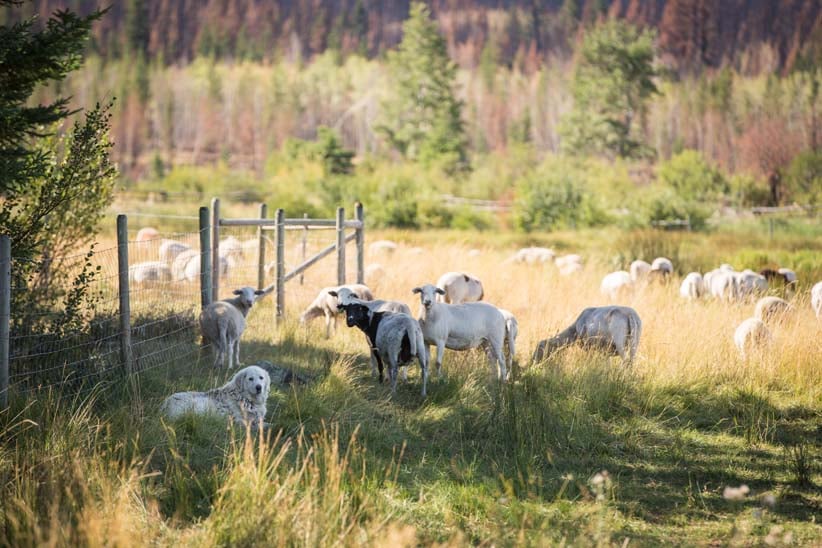 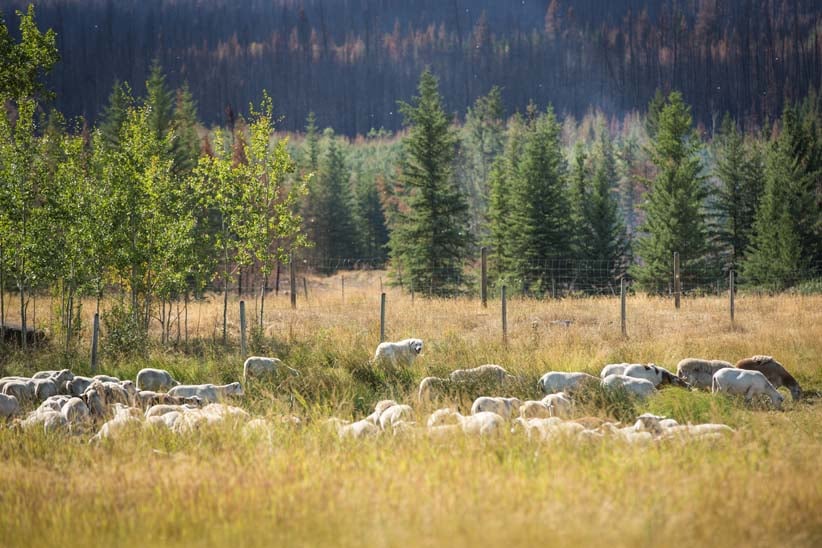 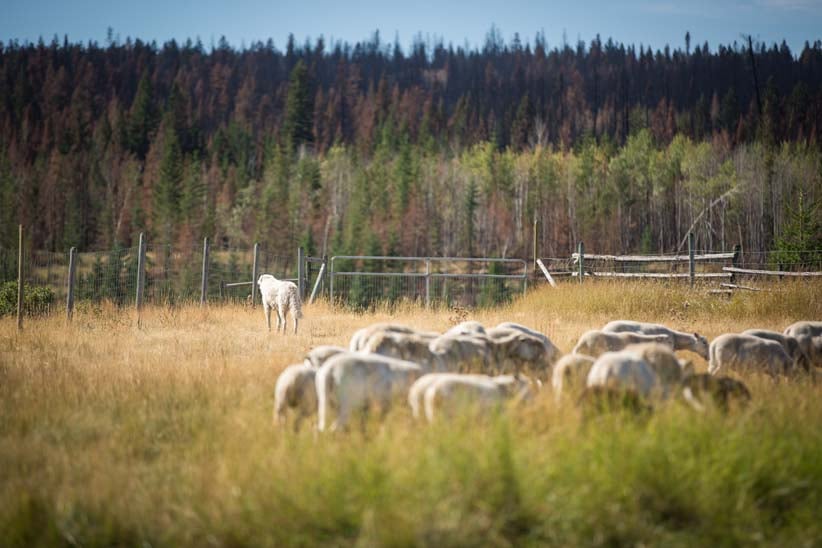 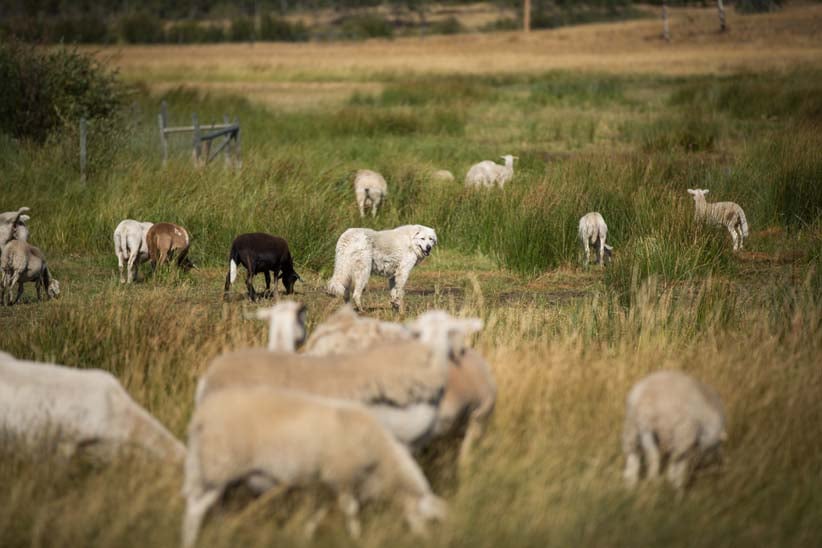