Canada’s delegation to the Paris climate talks speaks in lofty tones. But hints about targets are hard to come by. 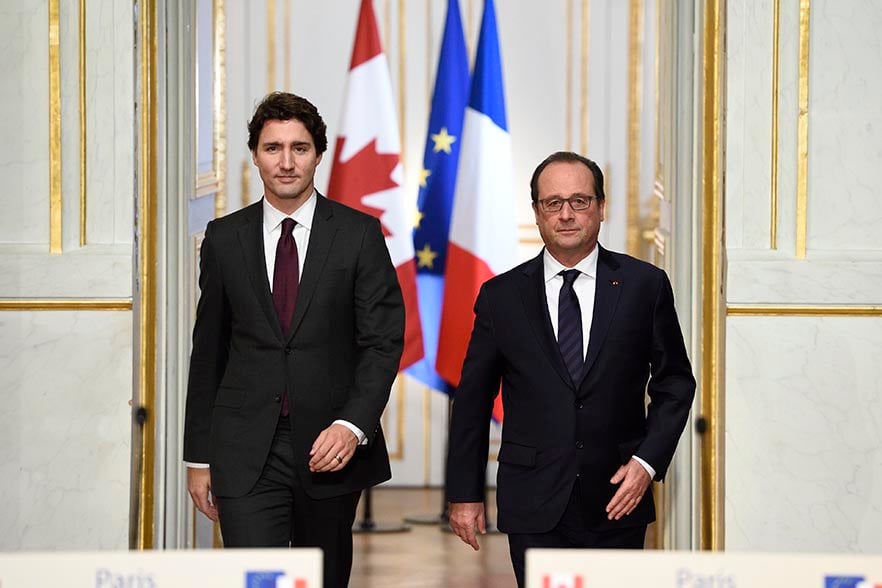 Atiya Jaffar spent her teen years in Canada, returning to Pakistan in 2010 for a visit that coincided with the worst rainy season in 50 years. Massive monsoon flooding forced millions from their homes and also forced a realization, for Jafar, of climate change’s most dramatic impact.

“We turned on the television and I saw this image of these people who were clinging to barbed-wire fences with their hands, with water just gushing around them,” Jaffar said. “That was one of the most powerful images I saw that made me recognize the immediacy of the [climate change] crisis.”

Jaffar’s concern about extreme weather, as well as its disproportionate impact on the world’s poor, prompted her to join Canada’s youth delegation in Paris this week for the United Nations climate change conference, also known as COP21.

Jaffar and the youth delegation are not alone in their conviction. They joined 50,000 other participants and more than 150 leaders from around the world—organizers say it is the largest gathering of heads of state, ever—at a converted air hangar north of Paris as the conference kicked off with soaring speeches and apocalyptic visions.

President Barack Obama told the conference “the next generation is watching,” while Britain’s David Cameron said “the Earth is in peril” and Canada’s Prime Minister Justin Trudeau announced: “Canada is back, my friends. We are here to help.”

And with that, they were off. Now the world’s most influential leaders have mostly flown home, leaving their teams of negotiators to spend two weeks locked in temporary rooms, arranged by country and voting block, hammering out an agreement to try to prevent more than two degrees of warming above pre-industrial levels. The talks are the culmination of years of preparation, as developed and developing countries debate who needs to do more to mitigate global warming—and which countries need to pay for it. Proposals currently on offer could limit warming to 2.7° C. There is hope the next weeks of negotiation could push that number lower. 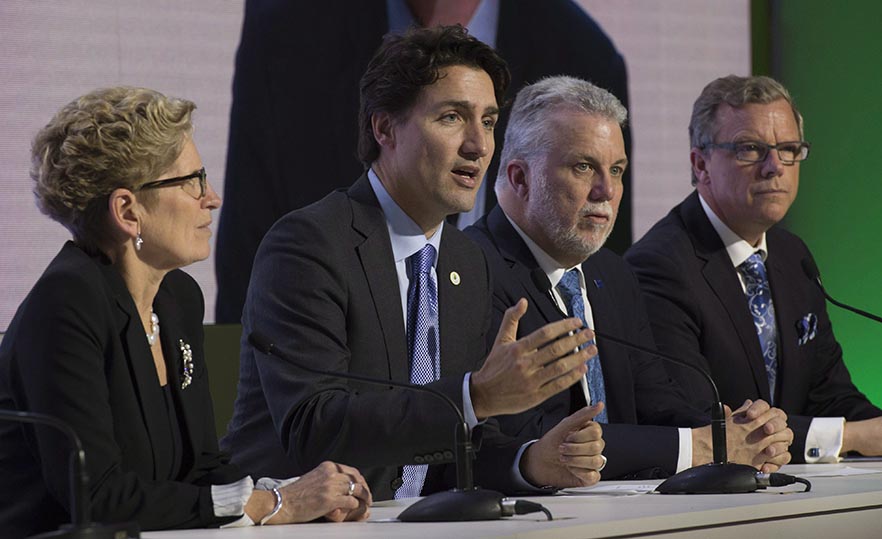 Prime Minister Justin Trudeau and his new environment minister, Catherine McKenna, arrived in Paris talking of ambition, but armed with no hint of a new goal to improve on the last government’s much-maligned targets. The Conservatives pledged to lower greenhouse gas emissions by 17 per cent above 2005 levels by 2020, and by 30 per cent by 2030.

The Liberals won goodwill on the international stage simply by embracing climate science and arriving as willing negotiating partners. It also helped that Trudeau announced $2.65 billion over five years to help poor countries adapt to the impacts of a warming planet. “The new government has really brought new hope, especially for developing countries,” said Sanjay Vashist, director of Climate Action Network South Asia. Standing outside the building that houses the conference’s main plenary room (away from the lineups for fair trade coffee and the ubiquitous recycling bins), he said Canada was the first to announce climate funding for developing countries “with a timeline, with a roadmap­—U.S., Japan, nobody has done it.”

Countries at risk of being flooded literally out of existence as glaciers melt—from Antigua to Haiti to Vanuatu—are negotiating as a block the UN refers to as “small island developing states.” Barijaona Ramaholimihaso, chair of the Madagascar Biodiversity Fund, says his country is fighting climate change on all fronts, from drought in the south to flooding in the north and the threat of intense hurricanes throughout. But the country with a per capita GDP of $1,800 is too poor to manage those threats without assistance. “We are already in emergency mode,” he said.

So far, Trudeau has refused to say when Canadians will find out what kind of emission cuts the Liberals are considering, or how, exactly, the federal government will work with the provinces and territories to improve the country’s performance. It is widely believed Canada will not meet the Conservative-set 2020 target, and instead will have to buy international carbon offsets, then work toward an improved performance for 2030. Trudeau invited the premiers to Paris and has promised to hold another first ministers meeting 90 days after the conference, although it’s not clear if that will be when any new Trudeau targets are unveiled—if indeed there are to be new targets.

Both Trudeau and Foreign Affairs Minister Stéphane Dion, who has a long-time interest in climate change, say the Liberals laid out their plan in the Liberal election platform: $5.7 billion over four years for green infrastructure and another $300 million a year for clean technology and energy efficiency initiatives, as well as a $2-billion low-carbon economy trust to fund projects that reduce emissions.

“There is an obsession about targets among some people,” Dion said, rather pointedly, in an interview shortly after a press conference in which Trudeau avoided answering questions about what comes after the premiers meeting. “It’s very nice to have a target and to announce it to the media to look good. If you have no plan to implement it after, what kind of credibility [do] you have?” 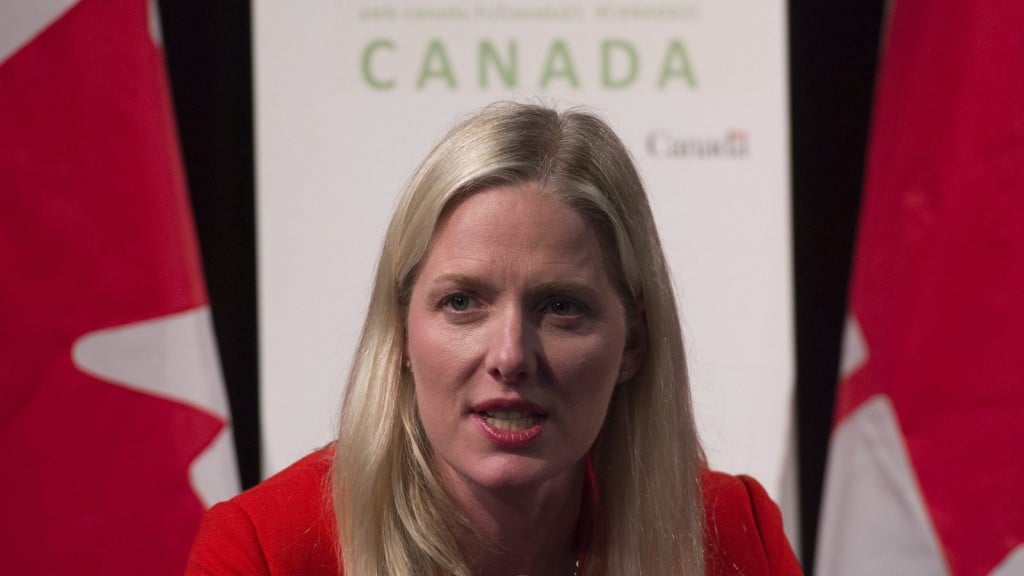 Sitting on a sofa near the Canadian delegation office, Dion says delegates at COP21 see that Canada is serious and wants to do its share. “Emissions in Canada are still going up and [the] countries are aware of that. And they are aware of the fact that we have a plan and that’s the key point.”

But already, there is trouble. Saskatchewan Premier Brad Wall, whose province’s economy relies heavily on the oil and gas industry, says he doesn’t like the idea of more ambitious federal targets and warns he would oppose a national carbon tax if the revenue were to leave the provinces. Wall would also like to see credit given for Saskatchewan’s investments in carbon capture and sequestration technology, which he told reporters in Paris is “the largest per capita investment in technology that will mitigate carbon.”

The premiers of the most populous provinces have carbon pricing of some kind, or specific plans to introduce it. They are also likely to ask for credit or compensation for their own efforts to lower emissions.

“We’ll meet and then we’ll determine what we can do together, and what the federal government can do to support and encourage each of us,” Ontario Premier Kathleen Wynne said in an interview with Maclean’s in Paris. That means using the funds Trudeau has allocated for helping the provinces move more quickly or be more ambitious about their programs. “Because the federal position can’t just be the sum of what the provinces are doing. It has to go beyond that.”

Wall is widely expected to be the tough sell at the premiers meeting, but Wynne says the carbon capture experiment suggests otherwise. “Brad Wall is interested in that kind of innovation. He talks about it. So we’re really not as far apart as sometimes it sounds.”

Trudeau has three months before meeting his premiers, and he could wait up to a year until the United Nations needs to know how Canada plans to fulfill its promises.

For now, the political clock in Canada is ticking quietly.