Gretta Vosper, a United Church minister who declared herself an atheist, is a founder of Toronto's Oasis Network 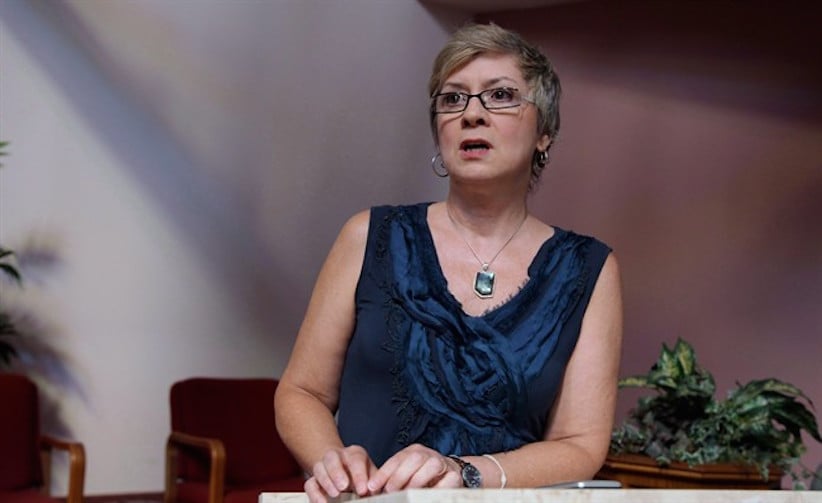 Rev. Gretta Vosper is seen at her West Hill United Church in Toronto on Wednesday, Aug. 5, 2015. Vosper, a minister deemed unsuitable by the United Church for declaring herself an atheist, is now at the heart of an effort to establish a type of church-style, secular community in Canada. THE CANADIAN PRESS/Colin Perkel

TORONTO – A minister deemed unsuitable by the United Church for declaring herself an atheist is now at the heart of an effort to establish a type of church-style, secular community in Canada.

Gretta Vosper is one of about 10 founding members of Toronto’s Oasis Network, believed to be the first of its kind in Canada and due to launch in February.

Oasis communities, which have sprung up in several locations across the United States, are non-faith-based groups that try to draw people together based on five broad-based principles.

Among them are notions that reality is best understood through reason rather than religious insight, and that the world’s problems are best addressed by people rather than divine intervention.

Vosper sees setting up the community in Toronto as a natural extension of the work she’s already doing at one of the city’s churches.

MORE: Is this the key to growing Protestant churches?

The United Church criticized Vosper for declaring herself an atheist and will hold an ecclesiastical hearing in late 2017 to determine whether or not she will be defrocked as a minister.

Vosper is fighting to keep her job as the pastoral leader of the West Hill United Church in east Toronto and said her involvement with the Oasis community builds upon what she has tried to establish there.

“There’s many elements of religion that will be picked up by Oasis, but they’re not exclusive to religion,” Vosper told The Canadian Press.

“Religion has carried them forward and done it very, very well in many ways, but also in many ways has done it with drastic results. So to distill the best elements of religion in a way that can allow them to be embraced by an increasingly secular world I think is important, and that’s what we’re doing.”

Oasis will maintain many trappings of a traditional church, she said.

The group will gather on Sunday mornings, often seen as the time best-suited for family activities, and congregate in a multi-faith centre in downtown Toronto.

They will offer programs for children while adults listen to a guest speaker or a local musician.

Gatherings will not centre around a single leader, but will instead be shaped by the guest presenters who will help lead discussions of topics that are relevant to the community.

Vosper said the group is open to anyone who shares the five core principles of Oasis: “people are more important than beliefs,” “reality is known through reason,” “human hands solve human problems,” “meaning comes from making a difference, and “be accepting and be accepted.”

She said the goal is to create a free-thinking, compassionate community that offers many of the same benefits regular church-goers have experienced.

Vosper said the group is far from an atheist community, adding people of all religious convictions are welcome.

Vosper emerged as a controversial figure in United Church circles when she renounced belief in God and the bible in 2013. She recently told a Church review panel that she identified as an atheist as a sign of solidarity with those who were persecuted for challenging religious fundamentalism or extremism.

In September that review committee issued a report saying Vosper’s lack of belief in God, Jesus Christ or the Holy Spirit made her “not suitable” as a minister.

Vosper, 58, who was ordained in 1993, joined her West Hill congregation in 1997 and has been up front about her beliefs for years.

Things came to a head after she wrote an open letter to the church’s spiritual leader following the Charlie Hebdo massacre in Paris in January 2015, pointing out that belief in God can motivate bad behaviour.

The general secretary of the church’s council decided on the review of her fitness to preach.

Congregation members and fellow ministers have supported her throughout the controversy, with one retired leader asking to be defrocked as a show of support.