'I think three-quarters of the East Coast at one time or another have been at Fort Mac. It’s like a second home, really' 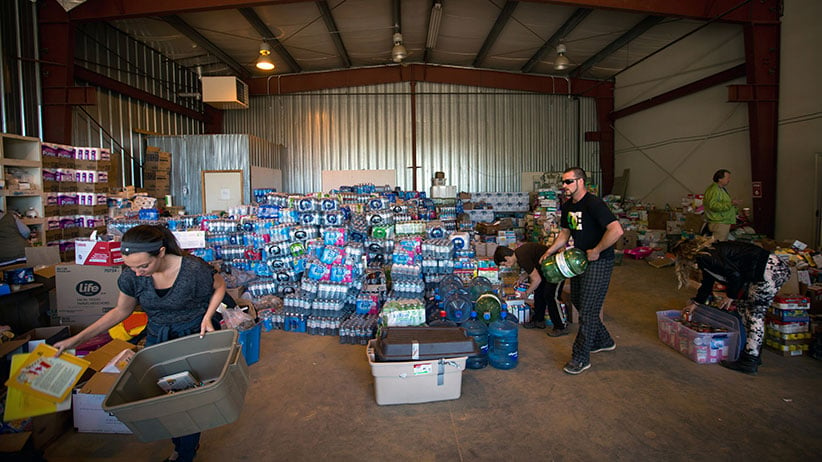 Residents of Fort McMurray, Alberta, sort through donated items brought to a donation centre in Wandering River after evacuating Fort McMurray due to raging wildfires on May 6, 2016. (Topher Seguin/Reuters)

“Think of the time when everything was great in this hardworking town with a terrible fate.” Musician Keith Mullins wrote these lyrics at his home in Cape Breton as an ode to the victims of Fort McMurray’s wildfire. “With a little help from some friends,” the song goes on, “we will rise above this calamity.”

Mullins, who drove four and a half hours to perform the song at a benefit concert in Halifax, is just one of a large number Atlantic Canadians volunteering, donating and singing for evacuees. Dan Beddel, public affairs officer for the Atlantic branch of the Red Cross, says the building in Halifax is crowded with donors. “My general sense is that Atlantic Canada is responding to this particular disaster more so than any other disaster in my 10 years with the Red Cross,” he says. The organization hasn’t yet calculated what percentage of the $60 million in donations it’s so far received have come from the East Coast, but Beddel adds, “I certainly wouldn’t be surprised if Atlantic Canadians more than gave their fair share.”

Given the number of Eastern expatriates in Alberta, Fort McMurray is like a satellite St. John’s, a sister city to Halifax and a colony of Cape Breton. “There’re more Cape Bretoners there than in Cape Breton probably,” says Mullins. “All my high school buddies are there.” Labour market research conducted by Enform in 2013 predicted that the oil sands would employ 5,500 to 5,600 Atlantic Canadians each year until 2022. The close ties became the topic of a recent song called “Work Away” by Nova Scotia rapper Classified, featuring David Myles. “I work away cause there ain’t enough work where I come from,” explain the lyrics, which gained new meaning in light of the wildfire. Classified and Myles dedicated the song to victims, with the proceeds going to relief efforts for evacuees.

Although a portion of Atlantic commuters lost jobs as a result of the oil slump of the last two years, many Easterners were still living in Fort McMurray when the fire struck. The village of McAdam, N.B.—which at one point had around 100 people living in the oil town out of a population of 1,300—maintains the nickname “Little Mac.” “We have about 12 families that have been burned out,” says Mayor Frank Carroll, accounting for six families from the neighbouring village of Harvey. His administrative officer, Kyle Savoi, delivered baby clothes to a friend who returned with his children. “Friends will always be friends,” says Savoi.

Easterners are also deploying to help on the ground in Alberta. Douglas Murphy, a Red Cross volunteer from Moncton, is supervising a team in Lac la Biche. “It’s just a way to give back to humanity,” he says. Murphy has met evacuees from back East. “Sometimes, by their accent, I can tell they’re from Newfoundland,” he says. “I think three-quarters of the East Coast at one time or another have been at Fort Mac. It’s like a second home, really.”

While the vast majority of Easterners are supportive to evacuees, social media shows traces of malice. Mullins says he saw comments on Facebook criticizing Fort McMurray for being a “money town” that “had it coming.” “There were people slagging the town,” says Mullins, noting his motivation to write the song. “I felt terrible. I had to write about how I felt.”

Musicians are particularly responsive because they often performed in Fort McMurray. “There are three regular venues in Alberta,” says Ian McKinnon, a highland piper and president of GroundSwell Music, a label and management company. “Those would be Calgary, Edmonton and then Fort McMurray.” Their shows usually include Atlantic tunes. “There’s a very strong feeling of nostalgia with music,” says McKinnon. “It’s one thing that helps to cope when you’re living away from your homeland.” 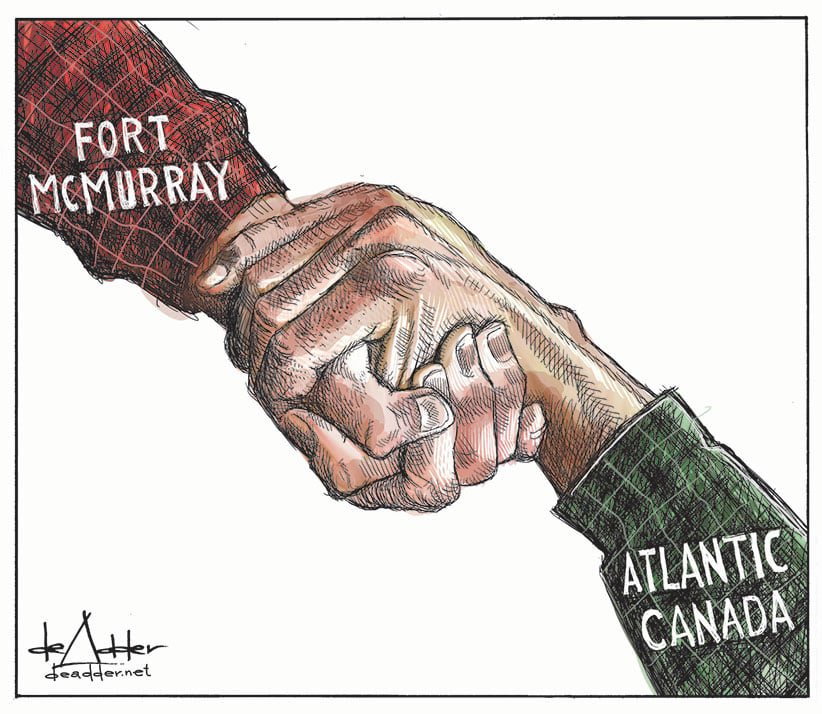 Gabrielle Papillon, a Halifax-based songwriter, toured in Fort McMurray last month. “We laughed so hard we couldn’t even sing sometimes,” she says. “There were four or five fellas who stayed and played after [the show]. One was from Dartmouth. One from P.E.I. Another was from Cape Breton.” Papillon played with Mullins and other musicians including Ben Caplan at the benefit concert in Halifax, which was broadcasted on the street for an overflow crowd. Meanwhile, GroundSwell Music is donating all its online profits to the cause, and Alan Doyle of Great Big Sea is raising money through a concert in St. John’s. Halifax comic artist Michael de Adder portrayed the response with the accompanying sketch.

Easterners say the generous response is just typical of their culture. “It’s been very strong but not surprising,” says McKinnon, and Mullins agrees: “I’m always willing to offer a bed or supper to strangers coming through.” When performing, sometimes for audiences of nearly 1,000, Mullins closes his shows with an open invite to his home. “I’m at 601 Cabot Trail,” he tells the crowd. “Stop in for tea.”