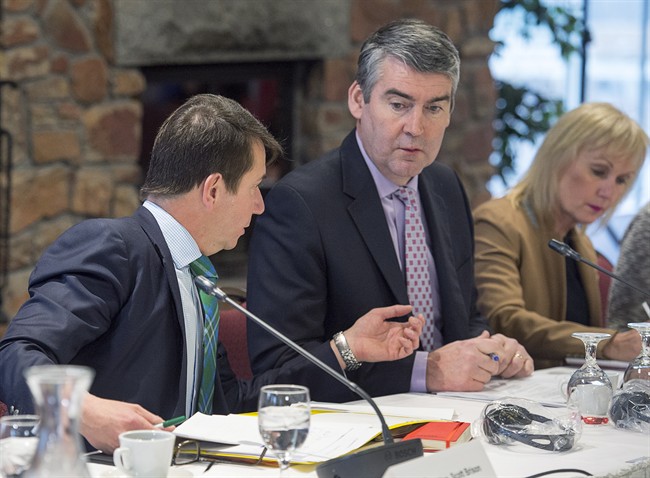 Treasury Board President Scott Brison, left, and Nova Scotia Premier Stephen McNeil talk at the start of a meeting of Atlantic Canada premiers and several federal ministers to discuss the Atlantic Growth Strategy, in Wolfville, N.S. on Friday, Jan. 27, 2017. THE CANADIAN PRESS/Andrew Vaughan

Atlantic Canadian premiers and several federal ministers announced a key step in an immigration pilot project, at the conclusion of their second meeting on the Atlantic Growth Strategy initiative Friday.

Immigrants arriving in the region will have a job offer and an individualized settlement plan for them and their families.

“The idea behind this is to leverage the unique position of employers to help immigrants and their families better integrate into their new communities in Atlantic Canada and to remain here for the long-term so they can help grow the region’s economy,” Hussen said after Friday’s meeting in Wolfville, N.S.

Under the plan – part of the new Atlantic Immigration Pilot announced last July – the government will accept up to 2,000 immigrant applications this year, with increased numbers in following years depending on performance.

The pilot project is aimed at ensuring newcomers stay in the region instead of joining the stream of outmigration to other parts of the country.

Nova Scotia Premier Stephen McNeil said his province recognizes the need to capitalize on the 20,000 young people who choose his province for post-secondary education.

“About seven to eight thousand of them are from other countries,” said McNeil. “We’re aggressively going to work with our universities to grow that number even more and provide them an avenue to stay inside of our province to grow jobs and create opportunities.”

The premiers and federal ministers also agreed in principle to a $20 million Atlantic trade and investment growth strategy, with an aim of doubling the number of exporting companies in the region by 2025.

They also announced the expansion of the federal government’s Accelerated Growth Service – which provides financing support and advice to companies – to the region.

The immigration plan is only one of the five pillars in the Atlantic Growth Strategy. Other aspects deal with innovation, clean growth and climate change, trade and investment, and infrastructure.