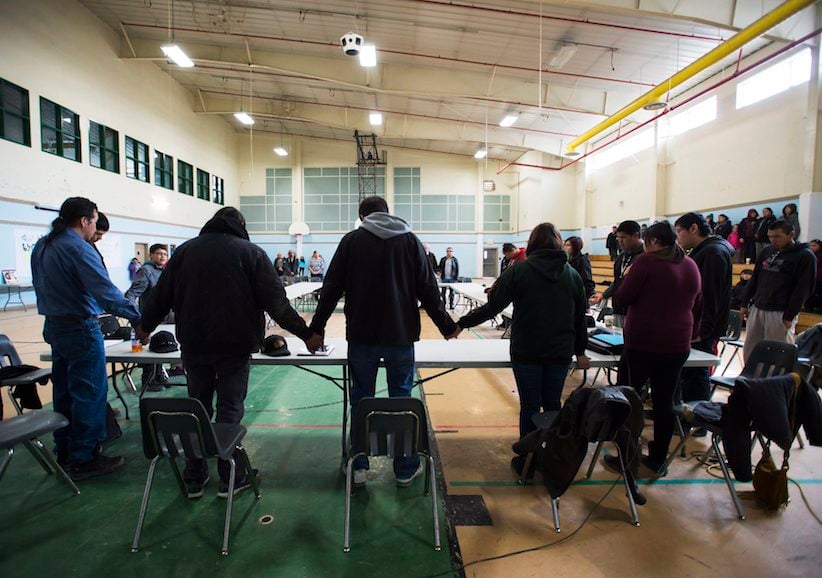 The youth panel hold hands before a meeting in the northern Ontario First Nations reserve in Attawapiskat, Ont., on Monday, April 16, 2016. THE CANADIAN PRESS/Nathan Denette

OTTAWA — Two cabinet ministers will speak at the United Nations in New York City today about the government’s approach to indigenous affairs, but grave conditions on a northern Ontario reserve have prompted the NDP’s indigenous affairs critic to cancel his attendance as part of the Canadian delegation.

Indigenous Affairs Minister Carolyn Bennett and Justice Minister Jody Wilson-Raybould are set to speak at the UN’s Permanent Forum on Indigenous Issues as the government looks to position itself on the UN Declaration on the Rights of Indigenous People.

Charlie Angus, who represents the Ontario riding encompassing Attawapiskat First Nation, was invited to be part of the Canadian delegation but he has cancelled his trip to fly to the community this morning with MPP Gilles Bisson.

Angus says he was honoured to be invited to the UN but conditions in Attawapiskat continue to be the source of great concern a month after the community declared a state of emergency over its youth suicide crisis.

He also says necessary resources are still lacking on the ground — an issue he finds shocking because the reserve’s plight has been raised with the government’s most influential players, including officials inside the Prime Minister’s Office.

Prime Minister Justin Trudeau contacted the chief of Attawapiskat last week and agreed to meet the leader at a mutually convenient time, though no date has been announced.