Region described as priority by government still being charted with some maps from 1970s, report reveals 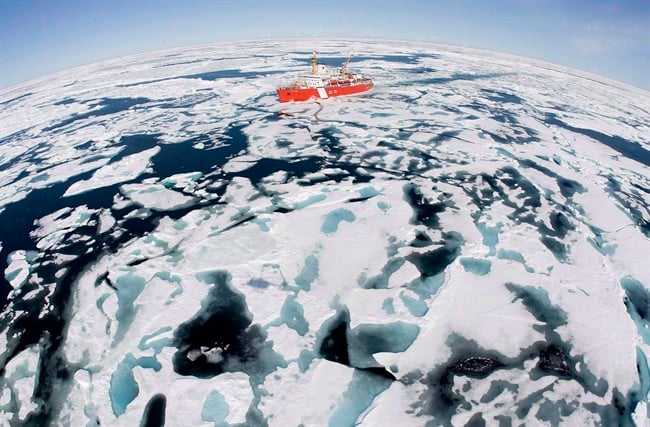 The Canadian Coast Guard icebreaker Louis S. St-Laurent makes its way through the ice in Baffin Bay on July 10, 2008. A lack of vision for the future of Arctic shipping is reflected in archaic maps and survey data, outdated navigational aids and icebreaking services that are being stretched too thin, Canada’s environment commissioner says.(Jonathan Hayward/The Canadian Press)

OTTAWA – A lack of vision for the future of Arctic shipping is reflected in archaic maps and survey data, outdated navigational aids and icebreaking services that are being stretched too thin, Canada’s environment commissioner says.

Julie Gelfand’s fall audit, released Tuesday, paints a startling portrait of decades of neglect in a strategically vital region of Canada long described by the federal government as a political and economic priority.

Despite frequent Harper government talk of resource development and Arctic sovereignty, the area has been “inadequately surveyed and charted,” with some Arctic maps dating back to the early 1970s, the report found.

“This means that many charts available to mariners are not current or reliable,” Gelfand told a news conference after the audit was introduced in the House of Commons.

“The charts based on data collected through hydrographic surveys that do meet adequate or modern standards generally have a high likelihood of undetected hazards and uncertainty in position of the data.”

Growth in marine shipping in the Arctic has meant a commensurate spike in demand for more accurate, detailed surveys and maps based on more efficient, detailed multi-beam sonar, the report noted. However, the Canadian Hydrographic Service lacks the resources and the logistical capacity to adequately conduct such surveys.

Gelfand’s report acknowledges the challenge the CHS faces, noting it would be unreasonable to expect the entire Arctic to be surveyed to modern standards. But the high-risk, high-traffic areas, particularly near communities where vessels come in to port, should be thoroughly mapped, it said.

Between 2002 and 2013, there were about 100 small mostly oil and gasoline spills in the Arctic, according to coast guard data.

Shipping in the fast-melting region is expected to increase and “given the fragile environment, harsh weather conditions, limited infrastructure, and the direct dependence of communities on those ecosystems, marine spills as a result of shipping are considered one of the most serious threats to Arctic ecosystems,” said the report.

Gelfand said the opening of just one mine project could increase traffic significantly.

“The numbers could increase pretty quickly,” she said.

The report also found the Canadian Coast Guard has not responded adequately to growing demands for improved fixed navigation aids in the Arctic, such as lights, beacons and buoys.

And it says the coast guard’s capacity to provide icebreaking services is stretched to capacity and likely to decline due to planned vessel refits, which come at a time of unprecedented demand and shipping seasons that grow longer each year.

Since 2007, commercial vessels have entered the Arctic earlier and left later than coast guard icebreakers. Concurrently, the icebreaking service has also reduced the number of days it operates in the Far North.

“This reduced presence in the Arctic means that icebreakers serving the region may have to cover more territory and may take longer to respond to user requests for icebreaking services,” said the report.