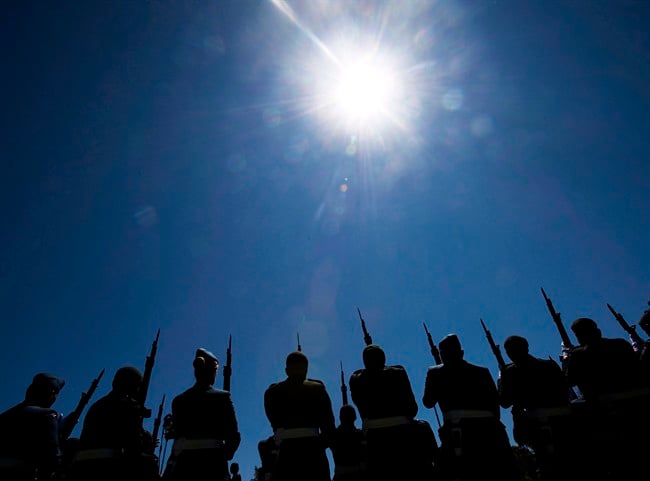 A Canadian military honour guard take part in a ceremony at the Canadian Forces Base Borden Centennial in Angus, Ont., on Thursday, June 9, 2016. A National Defence audit has found many of Canada’s military bases are falling apart because of chronic underspending on the maintenance, repair and replacement of sewers, roads and electrical, heating and drinking water systems. THE CANADIAN PRESS/Nathan Denette

OTTAWA – A National Defence audit has found many of Canada’s military bases are falling apart because of chronic underspending on the maintenance, repair and replacement of sewers, roads and electrical, heating and drinking water systems.

The problem is exacerbated by the fact military officials have little to no information on the actual state of those municipal works, meaning the department doesn’t know how what needs to be fixed or replaced.

The audit, recently published on the department’s website, concludes that the risk of electrical outages, sewer backups and other service disruptions at military bases is set to increase. Such disruptions threaten operations as well as the health and welfare of those living or working on or near the bases.

National Defence spokeswoman Ashley Lemire said the department is changing the way it manages its vast property portfolio. That includes taking authority away from the individual bases and centralizing it in Ottawa.

“The government of Canada is committed to equipping Canadian Armed Forces members with the resources required to do their jobs and to improving the facilities where they live, work and train,” Lemire said in an email.

“The new centralized model will continue to be refined to better support the management of real property, including municipal works, across the portfolio.”

But Lemire also confirmed that the more than $200 million set aside by this year’s federal budget for military infrastructure is not intended to address the underfunding identified in the audit.

The money will go toward armouries, aircraft hangars, naval jetties and military housing, rather than the basic utilities needed to operate military bases. More than half of the equipment associated with those utilities is over 50 years old.

Canada spends less than one per cent of its gross domestic product on defence after several years of belt-tightening by the previous Conservative government. That is among the lowest of all NATO allies, who have all agreed on a two per cent target.

The Liberals, who are currently drafting a new defence policy, have refused to say whether any new injection of money for the military is on the horizon.

In their report, the auditors laid much of the blame for the current problems on a combination of underfunding and poor record-keeping.

In 2008, defence officials set a number of spending targets with regards to replacing as well as maintaining and repairing existing infrastructure. However, auditors found that officials had not met those targets for the past five years “due to resource limitations.”

Base personnel “have consistently reported on funding pressures that have prevented them from reaching the targeted level of expenditure,” the audit report reads. “Chronic underspending on maintenance and repairs will lead to a continued decline in the condition and suitability of real property.”

Defence officials estimated there would be a cumulative $1.1-billion backlog in terms of maintenance and repairs by 2018. However, that figure is almost certainly low as the auditors found base personnel weren’t properly tracking, let alone checking, the state of infrastructure.

According to the audit, the condition field in the department’s property database was blank for 81 per cent of records. Service disruptions — power outages, sewage backups and water line breaks, among others — were also not tracked, meaning there was no way to know how often they occurred.

The auditors said military commanders could make a case for more funding if they had the proper information. But base personnel told auditors that part of the reason they were facing “chronic backlogs” when it came to entering information into the database was “limited resources to maintain the data.”