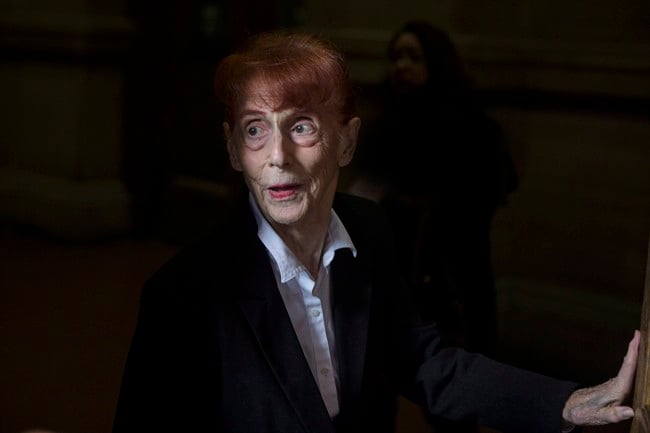 Activist Audrey Tobias, 89, looks back as she enters a Toronto court after speaking with journalists during a recess on on Thursday, October 3, 2013. Friends and family will gather at a Toronto church Saturday for the funeral of Tobias, a long-time peace activist who had a brief bout of fame after she went to trial for refusing to fill out the census three years ago. She was 92. THE CANADIAN PRESS/Chris Young

TORONTO — An activist who made headlines when she was criminally charged for refusing to fill out the census three years ago will be remembered for her spirit and tenacity at a funeral service in Toronto today.

Family members say Audrey Tobias died on Dec. 1. She was 92.

Friends and relatives say Tobias fought for causes large and small and had the ability to rally others to her side.

That drawing power came through in full force during her 2013 trial, which saw some 80 friends and supporters — many of them retired—fill a courtroom in downtown Toronto in solidarity.

Tobias was charged with violating the Statistics Act when she refused to fill out the 2011 census over its link to Lockheed Martin, a company she reviled. The American aerospace and weapons giant provided optic recognition software to Statistics Canada that helped analyze and process the census forms.

She was acquitted, with the presiding judge citing reasonable doubt as to her intent at the time of the refusal — though Tobias maintained afterward she knew exactly what she was doing.

That trial was Tobias’s last stand, said her friend Kathi Davies, who was among the supporters in court.

“The first day of trial she had a big bag and was rifling through it for something,” said Davies, who met Tobias through St. Cuthbert’s Church in midtown Toronto. “She had all her vitamins and medicine and I asked her, ‘What do need all that stuff for?'”

“Just in case they put me in jail,” she said Tobias told her.

“That trial knocked the socks off her,” Davies said. “It was a punch to her — the stress levels she went through. We could see her decline after that.”

Tobias fell this summer, breaking her left arm, and fell several more times later trying to get in and out of her wheelchair, she said.

She died in her sleep at a long-term care facility, said her nephew, Derek Tobias.

“I’m really proud of her for standing up for things she believed in,” he said from his home in Hong Kong.

Tobias took on many causes throughout her life.

Born in Toronto in 1924, she moved to St. Catharines for a time but returned to her hometown in 1943 after enrolling at the University of Toronto’s Trinity College.

At her mother’s urging, she then enlisted with the Royal Canadian Navy and joined the Women’s Royal Canadian Naval Service, according to Alan Rimmer, who recorded Tobias’s life story through a series of interviews.

She was stationed in Halifax until the end of the Second World War, where she helped crews prepare for fighting at sea through training exercises, he said in his account.

When the United States dropped nuclear bombs on Japan in 1945, something changed in Tobias, her friends said.

She worked in numerous factories where she really connected with the working class, and eventually joined the communist party, Rimmer said.

Tobias later became a high school teacher and taught in Sault Ste. Marie, Ont., Ottawa and Toronto, he said. She later returned to school to become a librarian.

She helped organize the first union for library workers at the Toronto Public Library, he said.

But her outrage over the atrocities of war continued to grow, and she was relentless in lobbying for peace. She also embarked on a never-ending battle against nuclear weapons, which led her to join the Veterans Against Nuclear Arms.

“We never won that campaign,” lamented Phyllis Creighton, another group member and friend of Tobias.

“She was one of the people for whom it was not theoretical. She really had a depth of feeling about the agony of nuclear bombing and the moral outrage we all should feel about it.”

It was through the group that she met Peter Rosenthal, the lawyer who would eventually represent her at the census trial.

“She was a wonderful role model for any human being, I think, to be that dedicated to peace and equality and to be so principled about it and at the same time to be so affable and pleasant, it was really quite remarkable,” Rosenthal said.