An estimated 24,000 hectares have already burned, and hot, dry weather is likely to worsen the fire threat in the coming days 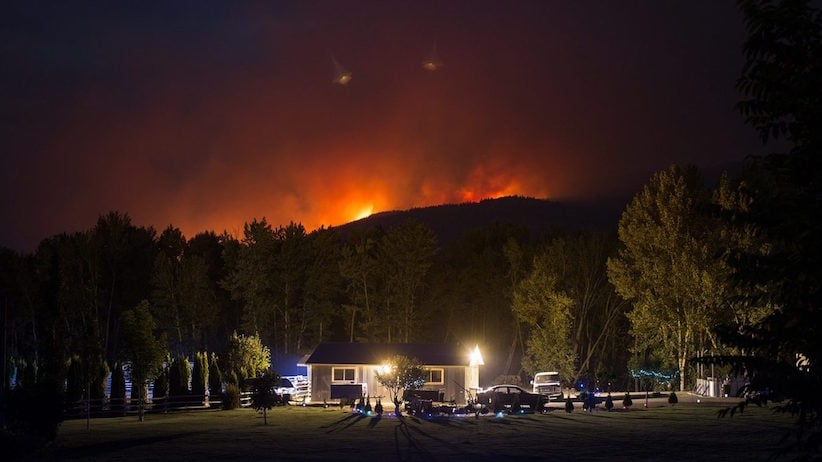 KAMLOOPS (NEWS 1130) – The BC Wildfire Service is expecting hot and dry weather to worsen fire conditions in the coming days, as crews battle dozens of wildfires that are raging out of control across British Columbia.

British Columbia is making $100 million available to communities and residents affected by wildfires to help them rebuild. Outgoing Premier Christy Clark announced the fund today during a visit to Kamloops, where she met with emergency officials and families impacted by scores of out-of-control fires.

She says the transition team for premier-designate John Horgan’s incoming government has been briefed on the establishment of the fund.

About 230 fires are burning across the province. 98 of those fires started on Saturday. But Chief Fire Information Officer Kevin Skrepnek says the number of fires is really an estimate.

“Right now our estimate for hectares burnt across the province is 23,697.”

READ MORE: Prescribed fires save money and lives. Why don’t we do more?

Chris Duffy with Emergency Management BC says at least 7,000 people have been displaced.

“1,800 evacuees registered in Williams Lake that are being directed to Prince George. About 1,200 registered at 100 Mile,” he says.

Skrepnek says crews will be busy for days.

“We’re not anticipating much of a reprieve from the weather, with continued hot and dry conditions in the forecast for at least the next three to five days,” he says.

“So with that in mind, we are anticipating increased fire behaviour on the existing fires that we’re already responding to. But also more than likely we’ll see some additional starts, just due to how volatile the conditions are.”

READ MORE: The Fort McMurray fire and the great escape

The province is expecting about 260 additional firefighters to assist with the situation. Police resources are being called in from the Lower Mainland to help with Interior evacuations.

“Given just how many fires we’re seeing here, we’re engaging all of our staff fully right now. We are looking into bringing in resources from elsewhere in Canada. I anticipate that’s going to start happening Monday, Tuesday of this coming week, in terms of bringing additional fire crews but also additional specialist position that can help us in terms of coordinating our efforts,” Skrepnek says.

Wells Gray Provincial Park will be closed today because of fire risk. It’s northeast of 100 Mile House, where one fire continues to burn out of control. The park has only one access road, making any evacuation difficult.

Looking east HWY1 outside #CacheCreek – One of many RCMP escorts out of town. Only 1st responders, utility crews etc going in. #bcwildfire pic.twitter.com/RRmFc1CgpP

The Red Cross has started a fires appeal to help provide immediate relief such as cots, blankets, family reunification and financial assistance for food, clothing and personal needs.

Some of the big fires around the region:

Cache Creek/Ashcroft
Estimated Size: 4,200 hectares
Evacuation Alerts/Orders: Entire village of Cache Creek has been ordered to evacuate, as well as many properties in the surrounding areas. For more, click here.

@NEWS1130 Ashcroft at the start of the blaze – houses shown are now gone – this was before the Hwy was closed pic.twitter.com/28bUHfdFUM

The Thompson-Nicola Regional District has declared a local state of emergency.

Sections of Highway 1 and Highway 97C have been blocked off near Ashcroft.

We were one of the last cars to make it through the #Ashcroftfire. Flames were coming over highway 1 and we switched to 97c. pic.twitter.com/lgtECviKcr

The wildfire near 100 Mile House in the southern Cariboo region has been spreading fast, forcing a number of people out of their homes and putting more on evacuation alert.

Insane #wildfire outside #100milehouse in BC #canada. one of the strangest things I’ve seen! #cariboo #forestfire #fire #paddleboarding pic.twitter.com/WtLSpgdpyf

A view near 108 Mile #BCWildfire pic.twitter.com/v7yS3XNphp

Estimated Size: 2,500 hectares
Evacuation Alerts/Orders: The wildfire one kilometre north of Chief William has caused evacuation orders to be issued for the South Lakeside area and Lexington Subdivision at Williams Lake. The evacuation order for 150 Mile House has also been updated.

Estimated Size: 2,000 hectares
Evacuation Alerts/Orders:The Cariboo Regional District has issued evacuation orders for the Wildwood area because of this fire. There is an evacuation alert for properties on White Road, Ross Road, and Glen Road near Williams Lake.

Pics from my husband who just drove E along Hwy 20 to #WilliamsLake. Scary up there. #bcwildfires pic.twitter.com/qMJ9NnZgui

A look at some of the #bcwildfire damage we’re seeing as we begin assessments. Our crews captured these shots near #WilliamsLake. pic.twitter.com/Xp4iKLLO6b

Evacuation Alerts/Orders:This incident involves numerous fires in a area of approximately 100,000 hectares. The Cariboo Regional District has issued an evacuation order for some residents along Highway 20 from 2.5 km west of Alexis Creek to 1 km east of Raven Lake Road. The order includes the communities of Alexis Creek and Hanceville.

Estimated Size: 1,500 hectares
Evacuation Alerts/Orders: An evacuation alert has been issued by the Cariboo Regional district for properties near Dragon Mountain.

Drive BC has closed sections of several highways across the province because of forest fires. Updates on road closures can be found here.