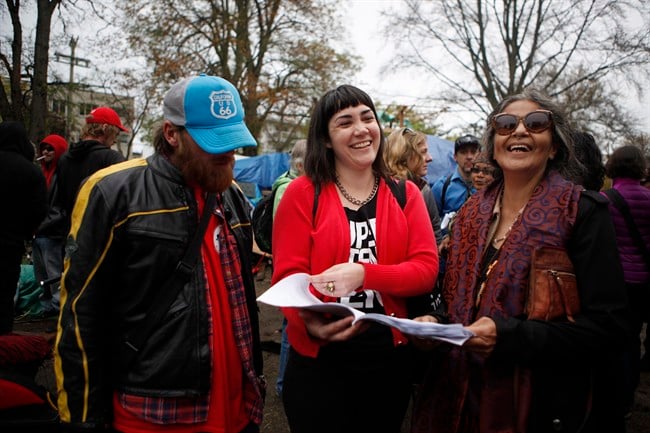 Resident Joseph Reville (left) looks over the injunction ruling with Super InTent City supporter Ashley Mollison, and resident Dawna Umbas, following the court decision in Victoria, B.C., Tuesday, April 5, 2016 that will allow residents to stay at Super InTent City through to September when they go back to supreme court. (Chad Hipolito/CP0

“We won, we won,” shouted people who have been living in tents on the grounds of the city’s law courts for months.

The court’s top judge refused the province’s request to grant an injunction to force the estimated 100 homeless campers to leave.

Chief Justice Christopher Hinkson ruled the government did not prove it would suffer irreparable harm if an interim injunction to remove the camp was not granted.

“I find that the balance of convenience weighs overwhelmingly in favour of the defendants,” Hinkson said in his written decision.

“I therefore decline at this time to grant an injunction removing the individuals who are currently residing at the encampment from the courthouse green space.”

He said he was concerned that issuing an injunction would mean the homelessness problems would simply migrate to other areas of Victoria.

Hinkson said the court heard evidence from addictions scientist Dr. Bernadette Pauly at the University of Victoria’s school of nursing that there were up to 1,725 homeless people in the Victoria area in 2014-2015. The court also heard from Roger Butcher, the province’s housing regional director, who said the most recent Victoria count estimates between 300 and 400 homeless people.

“I am satisfied that the number of homeless in Victoria continues to exceed the available beds and shelters in the city by a considerable amount, and this disparity will only worsen when some of the presently available beds are closed,” wrote Hinkson.

The camp has been growing since last spring when many of the city’s homeless who were sleeping in parks moved to the courthouse, building a more permanent community that included a common gathering area with a ceremonial fire.

Lawyer Catherine Boies Parker, hired by the Together Against Poverty Society to represent dozens of defendants in the government’s application, told campers their personal stories about homelessness helped sway the ruling in their favour.

“It is all about your stories and why it’s important to be here and what a good job you’re doing taking care of the camp,” she said. “It is a lovely judgment.”

Lawyers for the government told the judge they needed the injunction because campfires and a lack of facilities have created a health hazard and that there’s criminal activity such as drug trafficking around the camp.

The injunction application claimed people living in the camp are trespassing and have defied requests and orders to leave the property, despite the government’s offer of other housing.

Despite the ruling, the government has asked the court to hear arguments for a permanent injunction for camping on the courthouse grounds at a trial set for later this year.

“The permanent injunction application is going to be heard on Sept. 7, but in the interim we’re going to continue to look for housing options,” he said.

Victoria bylaws permit camping overnight in parks if shelters are full but require people to pack up every morning. The courthouse grounds are provincial property and are not subject to the bylaws.

Residents living near the courthouse camp are organizing a community meeting to voice their concerns about the camp they call a government-created ghetto.