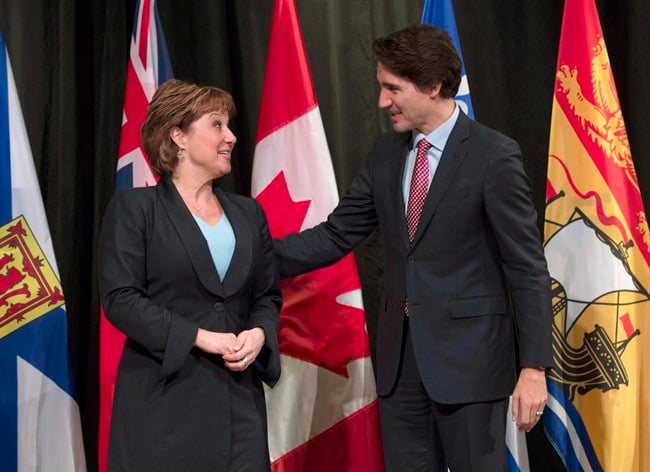 Prime Minister Justin Trudeau speaks with B.C. Premier Christy Clark as he officially welcomes her to the First Ministers meeting at the Museum of Nature, in Ottawa, on November 23, 2015. (Adrian Wyld/CP)

OTTAWA – British Columbia’s premier says the Trudeau government’s plans for a more independent, non-partisan Senate will make the much-maligned institution even worse than it already is.

Christy Clark says the new process for appointing senators on merit will give legitimacy to an unelected, unaccountable upper house in which her province will remain grossly under-represented.

B.C. gets only six senators in the 105-seat chamber, although it’s the third largest province with a population of about 4.7 million.

By contrast, the three tiny maritime provinces, with less than two million people combined, are entitled to 24 senators, as are Ontario and Quebec.

Democratic Institutions Minister Maryam Monsef announced last week the creation of an independent, five-member advisory board to recommend a short list of five non-partisan nominees to fill each vacancy in the Senate.

Two of the board’s members are to represent the province in which the vacancy arises, but Clark told the Global TV show West Block that her government won’t participate in the new process because it doesn’t want to validate it.

“I would argue that it actually makes it worse because the Senate is completely unrepresentative of the provinces.”

Clark added: “The Senate doesn’t work now. The only other thing that could make the Senate worse would be having all of these unaccountable, unelected patronage appointments starting to think that they are somehow legitimate and have the power to make decisions on behalf of our country.

While provincial governments will be consulted on the provincial members of the advisory board, the federal government can proceed without their participation if need be.

Prime Minister Justin Trudeau has argued that his approach is the only practical way to achieve concrete change in the Senate without getting bogged down in divisive constitutional wrangling with the provinces. His objective is to eliminate the partisanship that he believes has eroded the Senate’s ability to fulfil its intended role as an independent chamber of sober second thought.

The Supreme Court has ruled that more dramatic reforms — such as altering the Senate’s regional representation, imposing term limits, or requiring the election of senators — would require a constitutional amendment approved by at least seven provinces with 50 per cent of the population. Abolition of the chamber would require unanimous consent.

Nevertheless, Clark reiterated her view that the Senate should be fixed or folded. She acknowledged that would be “hard to do” but said it’s preferable to legitimizing senators who are unaccountable to Canadians until they retire at age 75.