After late talks and long strike, a six-year peace for B.C. teachers

Historic deal must still be ratified by teachers in Thursday vote, but it could reopen schools as early as Monday 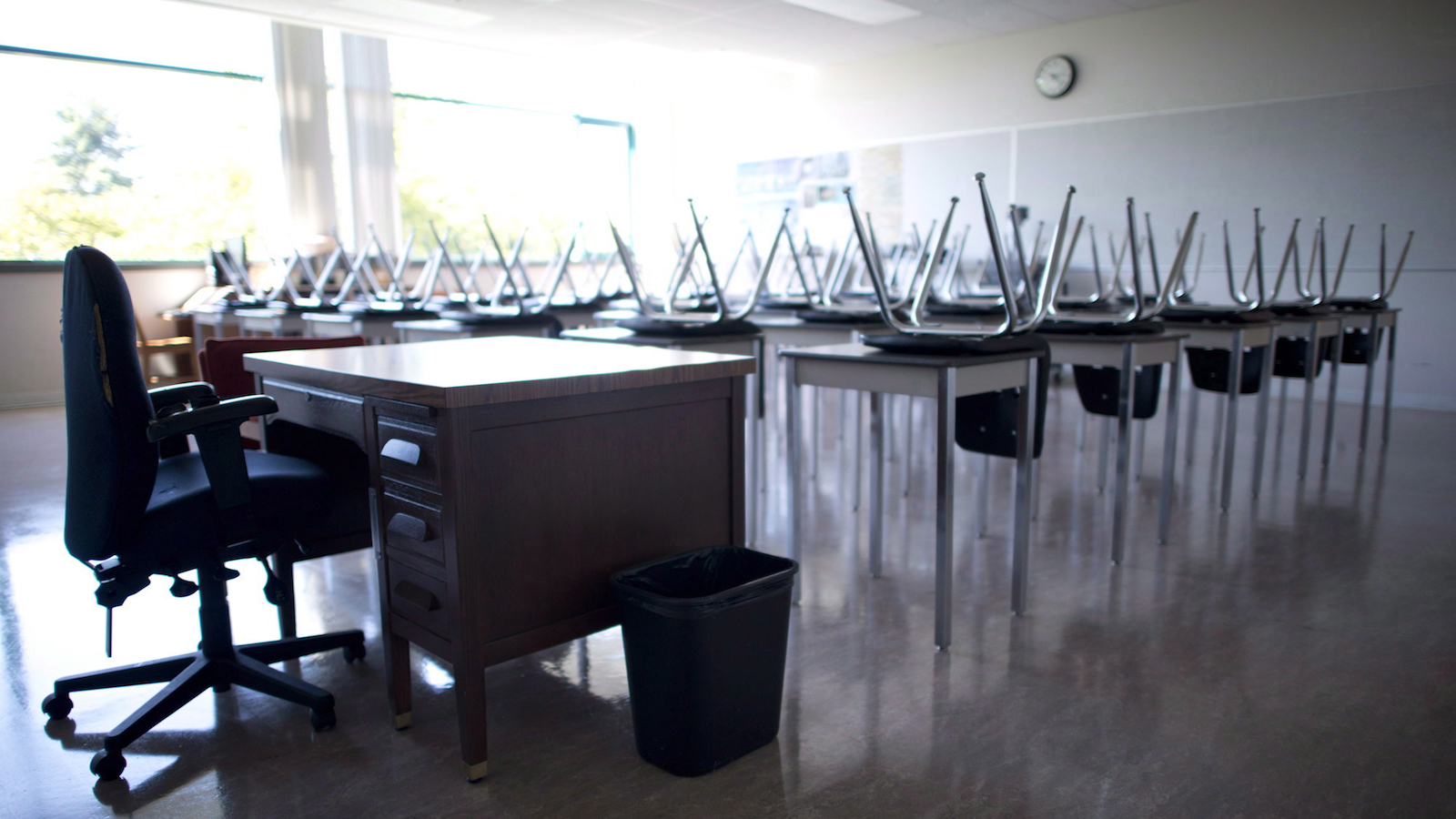 VANCOUVER – British Columbia’s long-warring government and teachers’ union have made unprecedented educational labour peace with a six-year collective agreement wrought through months of embittered strike action and a final six-day sprint to settlement.

The historic deal, if ratified by teachers in a vote on Thursday, will reopen schools as early as Monday for half a million students, restore the flow of income to more than 40,000 teachers and renew stability for families provincewide.

A breakthrough in negotiations came with the help of mediator Vince Ready just before 4 a.m. Tuesday. The result is a tentative contract that provides teachers with a wage increase, more funding for classroom composition, a plan for settling outstanding grievances and proceeds without a clause detested by the union.

Premier Christy Clark beamed and patted Education Minister Peter Fassbender on the back as she thanked students and parents for their patience and lauded union president Jim Iker for showing “real courage.”

“I think it’s a real game-changer for education in the long-term,” Clark told reporters in Vancouver, adding it’s an opportunity to reset a 30-year dysfunctional relationship with the union.

“We will now be able to sit down with some of the most important people in the system — and that’s teachers — and work together, rather than constantly arguing and fighting.”

The premier declined to provide contract specifics, saying teachers and trustees had the right to a first look. But the deal won’t require any tax hikes and the province will continue to appeal the court case that a judge has already decided in favour of the union’s right to bargain class size and composition, she said.

Earlier in the day, a member of the union’s bargaining team said the contentious E80 clause, relating to class size and composition, had been removed from the contract.

David Komljenovic, president of the Kamloops-Thompson Teachers’ Association, said many of the union’s issues were addressed at the negotiating table.

“Teachers had taken a vote last week about ensuring that the infamous E80 was off the table,” he said. “We did manage to get that off.”

“It’s an agreement we can live with. Definitely, there’s something for both sides. But the issues around what’s before the courts will remain there.”

The union thanked its more than 40,000 members through social media for their “commitment, courage and strength” during the months-long strike.

Union spokeswoman Nancy Knickerbocker said on Twitter that teachers will read over details and vote on the agreement on Thursday. She said schools, which have been closed since mid-June, will also need to be cleaned before students resume classes.

Administrators are also anticipating that Monday will be the earliest that most schools could open.

Vancouver School Board chairwoman Patti Bacchus said if the contract is approved, the board will attempt to get into the school year as quickly as possible. Principals have already been making preparations, she said.

“We’re fairly well prepared,” Bacchus said, adding many teachers still have to tidy up from last June because the strike began two weeks before the official end of the school year.

“It’s going to be bumpy for sure and people are going to have to be a little bit patient, but I know there’s a great desire to get back as soon as we possibly can.”

Ig Cheung, who has been teaching in Surrey for nearly two decades, said he’s relieved an agreement has been negotiated and intends to read it closely before deciding on his vote.

“I’m just hoping we haven’t given up too much,” he said.

Chung said that with morale waning on the picket lines, he’s not certain all his colleagues will return to the job wholeheartedly.

“This is going to be a very different year,” he said. “Some teachers, after all this, may just go and teach. They (will) forego extracurriculars like running clubs, coaching teams.”

Representing parents, Nicole Makohoniuk, president of the B.C. Confederation of Parent Advisory Councils, said the body wants future negotiations to begin well in advance of the contract’s expiry date. She hopes that will also help the healing process.

“B.C. still has the top education program, in my opinion, in Canada. I think (teachers) move forward,” she said. “They move on. Yes, they’re hurt, and yes, they forgive, but they don’t forget. That’s the biggest thing.”

Grade 12 student Queena Zeng said she expects everyone is feeling overwhelmed, but she’s optimistic that moods will brighten once classes get into gear.

“At the end of the day, everyone has to try to get back together,” she said. “It’s not just the teachers, but also the students and the admin. Everyone working together.”

Talks resumed last week as a group of unions offered $8.5 million in loans and donations to struggling teachers, while the government softened its opposition to back-to-work legislation.

B.C. governments of all political affiliations have struggled with the union over control over educational policy for decades, resulting in the present-day work stoppage that takes the title of longest provincewide strike in provincial history.