In the last six months, the B.C. coroners' service says deaths from apparent illicit drug overdose have spiked 74 per cent from last year 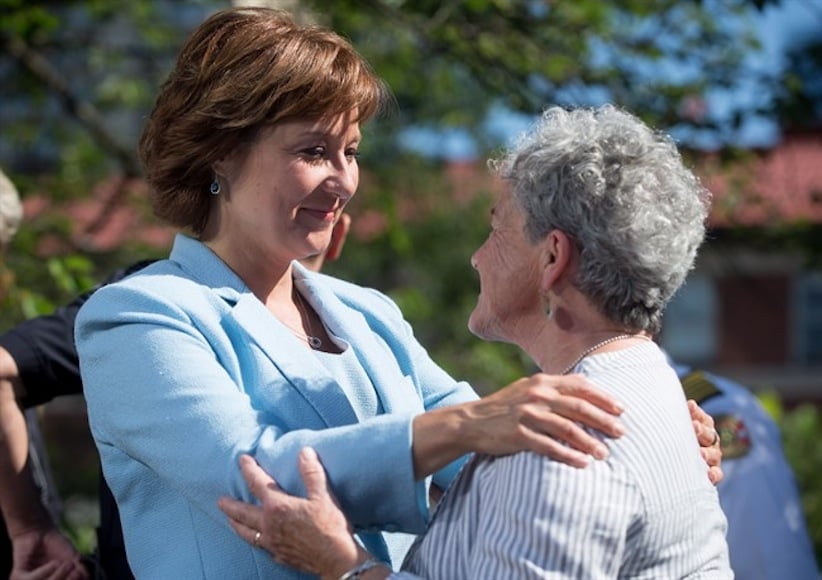 British Columbia Premier Christy Clark, left, embraces Leslie McBain, whose son died of an overdose in 2014, after announcing the creation of a joint task force on overdose response in Vancouver, B.C., on Wednesday July 27, 2016. THE CANADIAN PRESS/Darryl Dyck

VANCOUVER – Overdose deaths have climbed to such an urgent level in British Columbia that the province needs help from the federal government to deal with a public health emergency, Premier Christy Clark says.

Clark told a news conference Thursday she wants Ottawa to restrict access to devices involved with drug production, such as pill presses and tableting machines, and to pursue stronger penalties against people who import and traffic fentanyl.

Clark also called on the federal government to ask the Canada Border Services Agency to search small packages, including envelopes, for fentanyl in order to stop the drug from entering the country.

Recent statistics from the coroners’ service in B.C. show there were 371 deaths from apparent illicit drug overdose in the first six months of this year, about a 74-per-cent increase compared with the same period last year.

The service said the proportion of deaths where toxicology tests detected fentanyl jumped to about 60 per cent and that the drug was either used alone or in combination with other drugs.

“That scope is alarming. It’s frightening and it’s something that all of us should be concerned about,” Clark said at St. Paul’s Hospital in Vancouver, where she was flanked by police, ambulance and firefighting officials, as well as addiction experts.

MORE: A look inside a killer fentanyl crisis in Canada

Health Minister Terry Lake said various federal agencies would join forces to deal with other public health crises, which he said needs to happen as B.C. fights a rising death toll that prompted the province to declare a public health emergency in April.

“If this were SARS or Ebola, Health Canada and border security and immigration would all be focused on this as a health issue that is essentially like a pandemic,” Lake said. “I think when we put our minds to it we can do these things even though they appear to be difficult.”

Clark said B.C. is forming a joint task force involving the provincial health officer and the director of police services to identify ways to prevent and respond to overdoses.

“They’ll have two main goals: to get those deadly drugs off our streets and to get people the help that they need,” she said.

Clark said the province will improve access to treatment regimes, including its opioid substitution program, and will launch a public education campaign to draw attention to the dangers of laced drugs.

“Drug overdoses are absolutely senseless deaths. Every one of them is a preventable tragedy that families feel in the worst possible way,” she said.

“Some have lost their lives to a tainted pill at a party. They didn’t know what they were taking. Others were taken by that needless burden of addiction that they can’t kick. We need to support all of them.”

The B.C. Centre for Disease Control also released measures on Wednesday it believes will help tackle the problem after meeting with public health officials and the coroners’ service.

It wants to expand the availability of naloxone to reverse overdoses, expand access to opioid substitution treatments like suboxone and methadone and increase checks on street drugs, among other things.

Leslie McBain, whose 25-year-old son Jordan Miller died in February 2014 after becoming addicted to prescribed oxycodone for a workplace back injury, said she’s hoping the task force will consider the efficacy of safe-injection sites and more services to keep vulnerable people alive.

“We couldn’t find the support that he needed, either medical support or psychological support and so on,” McBain said of her son, who relapsed after going into detox.

Dr. Keith Ahamad, an addictions specialist, said more family doctors must be trained in recognizing and preventing addiction, similar to other chronic conditions such as high blood pressure and diabetes.

That’s the only way people dealing with addictions will stop bouncing in and out of emergency departments where staff are overwhelmed, he said.

Ahamad said St. Paul’s Hospital will open an addiction medicine clinic in the coming months to treat patients from throughout British Columbia.

“We’re going to be helping stabilize patients and transitioning them back to their doctors’ offices with very comprehensive plans in place.”