B.C. woman had tried to sponsor Syrian boy who drowned off Turkey

'This tragic loss is just heart-wrenching to go through,' MP says of family's devastating loss 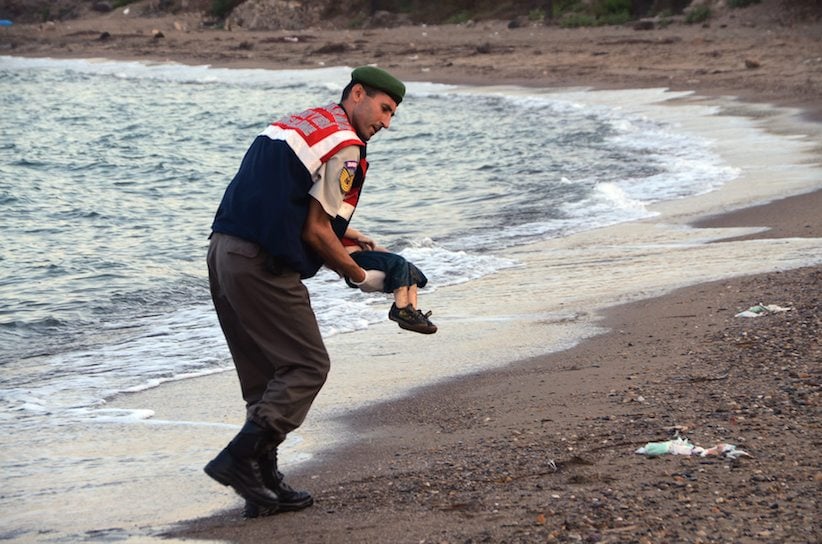 Images of a three-year-old boy washing up on shore Wednesday quickly galvanized debate around the world. (AP Photo/DHA)

Update 3:30 p.m. ET: New details suggest it is unclear if B.C. family of drowned boy applied for refugee status in Canada. Here’s the latest version of events, atop the original story:

Citizenship and Immigration Canada says it received no refugee application from the father of two drowned Syrian boys who have put a devastating human face to the Syrian refugee crisis.

Aylan Kurdi, the three-year-old Syrian boy whose lifeless body was pictured on newspaper front pages around the world Thursday, was trying to get to Europe after Canada rejected his family’s refugee application, according to a Vancouver-area politician.

Alan, his five-year-old brother Galib Kurdi and their mother, Rehan, died as they tried to reach Europe from Syria, according to Fin Donnelly, who is running for re-election in Port Moody-Coquitlam.

Donnelly said that Abdullah’s sister, Teema Kurdi, who lives in the Vancouver area, had been trying to sponsor three Syrian relatives — including her two young nephews — and their mother, who drowned off the Turkish coast.

The politician said he delivered a letter on behalf of Kurdi to Citizenship and Immigration Minister Chris Alexander in March but that the sponsorship request was not approved.

Kurdi told the Ottawa Citizen that she received a telephone call Wednesday from a relative who in turn had received a call from Abdullah, confirming that his wife and two boys were dead.

“I was trying to sponsor them, and I have my friends and my neighbours who helped me with the bank deposits, but we couldn’t get them out, and that is why they went in the boat,” Kurdi told the Citizen. “I was even paying rent for them in Turkey, but it is horrible the way they treat Syrians there.”

They were among at least 12 migrants, including five children, who drowned Wednesday when two boats carrying them to the Greek island of Kos capsized.

Donnelly said Kurdi has not made any immediate plans but had mentioned a possible service locally.

“This tragic loss is just heart-wrenching to go through,” he said. “She was just completely upset and heartbroken.”

The route between Bodrum and Kos, just a few miles, is one of the shortest from Turkey to the Greek islands but remains dangerous. Hundreds of migrants a day attempt the perilous sea crossing despite the risks.