Bank of Montreal to cut about 1,850 positions in bid to trim costs

The bank—the first of the big four to provide second-quarter results—will cut four per cent from its 46,166 full-time equivalent employees 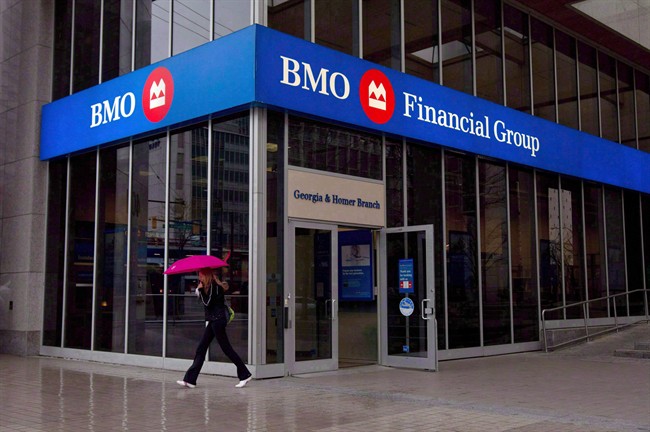 A woman leaves a Bank of Montreal branch in downtown Vancouver in a March 22, 2011 file photo. The Bank of Montreal says it is cutting its workforce by about 1,850 positions as consumers shift more of their banking online and technological advancements allow it to digitize some of its processes. (Darryl Dyck/CP)

TORONTO – The Bank of Montreal said Wednesday it is cutting about 1,850 positions from its workforce as consumers shift more of their banking online and technological advancements allow it to digitize some of its operations.

There were 46,166 full-time equivalent employees at the bank as of the second quarter, a decline of 616 employees from the previous quarter.

The lender said it will trim its head count by an additional four per cent, which amounts to roughly 1,846 positions, as it took a $132 million restructuring charge relating to severance costs for employees.

“The underlying activity that drives the charge really relates to the increased use of technology in our business,” BMO chief financial officer Thomas Flynn said during a conference call to discuss the bank’s quarterly earnings.

“And that’s true both on the customer-facing side, where customers are increasingly doing things in a digital way — either mobile or online — but also in terms of how we use technology to drive efficiency in our business.”

BMO was the first of the big Canadian banks to report its second-quarter earnings results. CIBC, Royal Bank and TD Bank will follow on Thursday, and Scotiabank will wrap up the earnings parade next week.

The bank said its second-quarter profit slipped three per cent as it set aside more money for bad loans to the oil and gas sector, in addition to feeling the brunt of the restructuring costs.

Restructuring charges have emerged as a common theme among Canada’s biggest banks in recent quarters, as the lenders look to reduce costs and digitize certain functions in response to a tough economic environment and changing consumer behaviours.

“The banks are responding to a very difficult loan growth and revenue growth environment by getting a lot more aggressive with expenses,” said Edward Jones analyst Jim Shanahan.

“Ultimately, this is really bad for financial services industry employment in the greater Toronto market.”

Shanahan added that other banks could also report similar restructuring charges — if not this quarter, then perhaps in the second half of the year.

Despite the fact that BMO increased its provisions for credit losses to $201 million during the quarter ended April 30, up from $161 million a year ago, Shanahan said he’s still concerned that the bank isn’t setting aside enough money for bad oilpatch loans.

“I’d still argue that outstanding reserves aren’t really adequate relative to this large and growing oil and gas exposure that they have,” he said.

On an adjusted basis, BMO earned $1.152 billion or $1.73 per share, up from $1.146 billion or $1.71 per share a year ago. That includes a $79 million writedown of an equity investment. Excluding the writedown, the bank said its adjusted net income was up seven per cent.

Revenue increased to $5.10 billion from $4.53 billion during the second quarter of last year.

BMO also announced its quarterly dividend will go up by two cents to 86 cents per share, effective Aug. 26.

FILED UNDER: Bank of Montreal