The Orphan Well Association is tasked with cleaning up the environmental messes left behind, but it’s having trouble keeping up as oil companies collapse 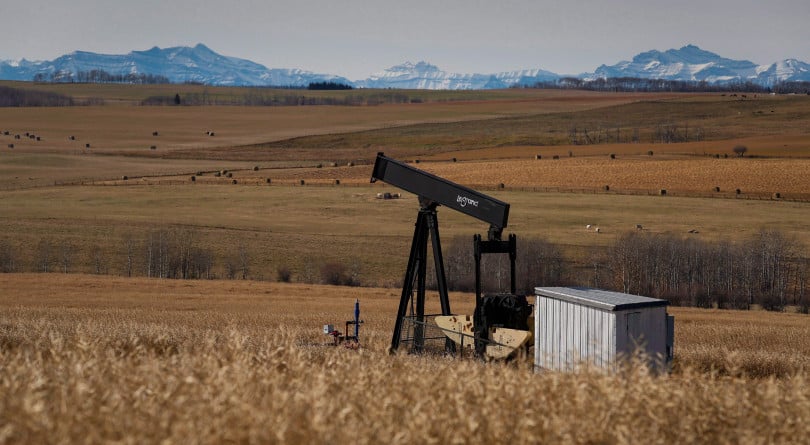 A de-commissioned pumpjack at a well head on an oil and gas installation near Cremona, Alta. (Jeff McIntosh/CP)

When quadding this spring on his land just southeast of Didsbury, Alta., 59-year-old Pat Williams can’t miss the herd of heavy equipment that’s returned to his farm for a second year. On one of his three quarter-sections, Williams pastures 65 Angus cows who were recently about to calve. On the other two he farms rotating crops of wheat, canola and barley. And for 50 years, there has been an oil well on each of the quarters.

But last summer the well heads, pumps and other equipment related to the wells on Williams’s land were harvested—so to speak—by the Orphan Well Association (OWA).

Established in the 1990s, the industry-financed OWA is tasked with trying to clean up the environmental messes left behind by bankrupt oil companies that walked away from their wells. By definition, an “orphan” well is one that no one actually owns after a company goes bankrupt.

READ: What happens when the demand for Alberta oil goes away?

When a well is orphaned, the OWA is supposed to step in to decommission it and restore the land to its original condition. But it’s having trouble keeping up with the growing number of orphaned wells in the province. In its most recent quarter, from last January to the end of March, some 1,574 wells were turned over to the OWA, mostly due to the collapse of three companies. As of mid-April, the organization listed 3,172 wells as orphaned—and that may prove to be a drop in the barrel. According to a recent government estimate, of more than 300,000 wells in the province, at least 167,000 are inactive, abandoned or orphaned.

The wells on Williams’s land, drilled back in the ’50s and ’60s, stopped pumping in 2012 after the last owner, Neo Exploration Inc., went under. He never worried about the health impacts on his family—the wells were tested often for air and ground contaminants and posed no risks. But other Alberta property owners stuck with orphaned wells attribute chronic health problems and even deaths to leakages from them.

Neo should have decommissioned its wells on the Williams property, removing surface equipment, plugging the well bores, hauling off contaminated soil and restoring the land. Critics accuse the Alberta Energy Regulator (AER)—an industry-run organization that funds the OWA—of failing to force firms to properly clean up their abandoned or orphaned wells. Earlier this year, the Supreme Court of Canada reaffirmed that companies can’t escape their regulatory obligations just by declaring bankruptcy. That’s expected to put the regulator under increasing pressure: with oil prices stagnating, more companies will struggle to meet their clean-up obligations.

To be sure, the OWA soldiers on. Last year, it managed to decommission 750 wells, says executive director Lars DePauw, and the target for the 2019 fiscal year is 700 more.

READ: How to grow the economy while also protecting the environment

The AER, meanwhile, has had to significantly increase the annual levy it charges the province’s oil and gas sector as it tries to cope with more and more well cleanups ditched by defunct companies. “Going back, [the levy] was $15 million in 2014,” says DePauw. “It is budgeted to be $60 million this fiscal year.”

But such moves seem puny compared to the scale of the problem. In April, a new coalition of former regulators, researchers and landowners called the Alberta Liabilities Disclosure Project stepped up the fight to make the oil and gas industry do more. Using freedom of information laws, it dug up internal AER documents that revealed the estimated cost of cleaning up Alberta’s oil and gas wells would be between $40 billion and $70 billion. That’s far more than the $18.5 billion the AER has publicly suggested.

Williams, unlike a lot of other anxious Alberta property owners, had a relatively short wait, about six years, before the OWA came to the rescue.

Last spring, when the land was hard enough, a convoy of heavy vehicles contracted by the OWA rumbled onto his land, including a huge service rig, water-tank trucks and a “dog-house” rig where the crew had a bathroom and a place to change and eat. The first stage of the process, the decommissioning work (plugging the well, removing the pumps, pipes and other equipment), took three months.

“It was nice to see the pump jacks gone,” says Williams. For decades he had to drive his equipment around the six- or seven-acre teardrop-shaped areas leased by the oil companies for each well. “It was a pain.”

Still, he’s wistful about one thing: the oil companies compensated him nicely for being on his fields. Landowners typically get around $5,000 annually per well lease. If Williams could farm that same land, he figures, he might only make $600 per lease, gross.

Since Neo’s bankruptcy, the Alberta government, through its surface rights board, has continued to pay Williams those lease fees—as it does other Alberta landowners saddled with orphan wells. But Williams’s payments will cease once the OWA restores his land to its original condition and a reclamation certificate is issued. That could take several years.

The night before he spoke to Maclean’s, Williams watched a new crew sent by the OWA tackle the next phase of work on his farmland. A clutch of large Caterpillar dozers and three backhoes were working the soil. “They are at the reclamation stage now,” says Williams.

Black dirt was being scraped up as much as a metre deep to get to the clay below. In his case, there was little soil contamination, just a bit concentrated around the wellheads. “They only hauled away a few truckloads of dirt,” says Williams.

Completing the reclamation work and getting crops to grow again “will take quite a few years,” figures Williams, who feels lucky to have the crews out there. Unlike many landowners, he harbours no ill will against the oil industry. “Without oil revenue, our province won’t survive,” he says. And while he has empathy for landowners anxiously awaiting the overburdened OWA’s help, in his dealings with them, he says, “all the contractors and people who came treated us with respect. They did what they said they would do.”