Barriers remain for women seeking political office despite progress made

Women in politics was the theme of the day on Parliament Hill on International Women's Day. 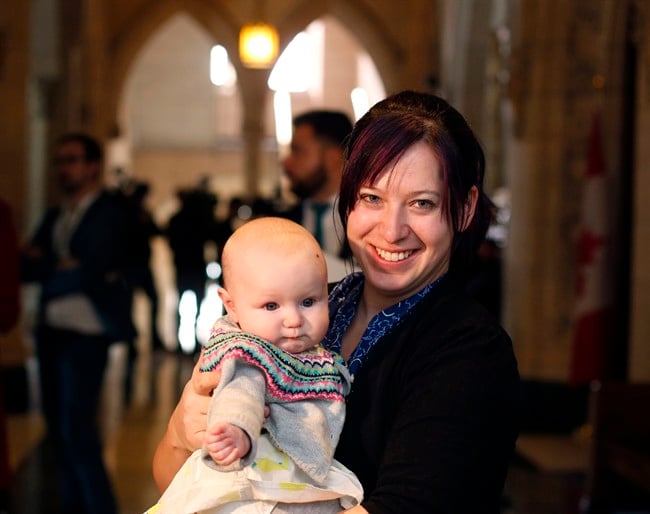 OTTAWA – Christine Moore’s daughter Daphnee is such a fixture in the House of Commons that the NDP MP describes the baby as her “partner in crime.”

Just six months old, Daphnee is routinely at Moore’s side, including in the legislative chamber — making the Quebec politician an expert on the life-work balance on Parliament Hill.

“We are a team together,” Moore said. “I think everybody understands she’s a baby and it could happen that babies cry. There’s some MPs that are making more noise than my baby.”

Female representation in the Commons and the need for family-friendly work environments continue to be among the barriers for women in politics — a theme that figured on Parliament Hill on International Women’s Day.

“I am humbled to stand in this place following in the footsteps of all the women parliamentarians who have served our country,” said NDP MP Tracey Ramsey.

“They have fought to ensure that the 88 women who serve in this Parliament can accurately reflect women’s diverse interests, voices and experiences.”

Related: What the last 20 years in the gender wage gap look like

While there has been a lot of recent chatter about how to reform the Hill to make it more conducive to families, Moore doesn’t see an obvious fix.

“There’s no perfect solution in terms of schedule,” she said.

She doesn’t think a proposal to cancel question period on Fridays will make a significant difference to many members of Parliament.

“For my case, it won’t be useful,” she said. “For a lot of MPs, it is not that useful. For the ones that have long travel, in fact, what could be more useful is to sit 12 days in a row and having 16 days off. I know that for me, it would be better for me to do that. For other people, it is not an improvement.”

For now, Moore is trying to make her juggling act work despite its challenges.

LeBlanc said he will encourage colleagues in other parties and MPs on the Commons procedure committee to allow Parliament to express itself on the issue.

“The key thing for me is that we need to allow this Parliament in the coming months to look at a series of options and decide on this,” he said.

Related: How MPs can manage the work-life balance

Hazel McCallion, who served as mayor of Mississauga, Ont., for 36 years, said it is possible for women to balance politics and family.

“I’ve been able to do it,” the 95-year-old said in an interview with The Canadian Press.

McCallion said her three children never claimed she neglected them, but she admitted she constantly had to balance priorities.

“I think planning has a lot to do with it … you have to know what to do to look after the family and then do your job. I was mayor while my youngest was … 10,” she said.

“It means hard work, getting up early in the morning.”

The political landscape has also evolved over the years to be more inclusive of women, McCallion added.

“I don’t think it is as dominated (by men) as much as when I entered politics some 44 years ago … Things have changed.”

“Today, we live in a world that our mothers and grandmothers would have found hard to imagine,” she said.