#BecauseIts2016: What else is long overdue?

Read prominent Canadians from a range of backgrounds tell us what is overdue in Canada. Then submit yours, too. 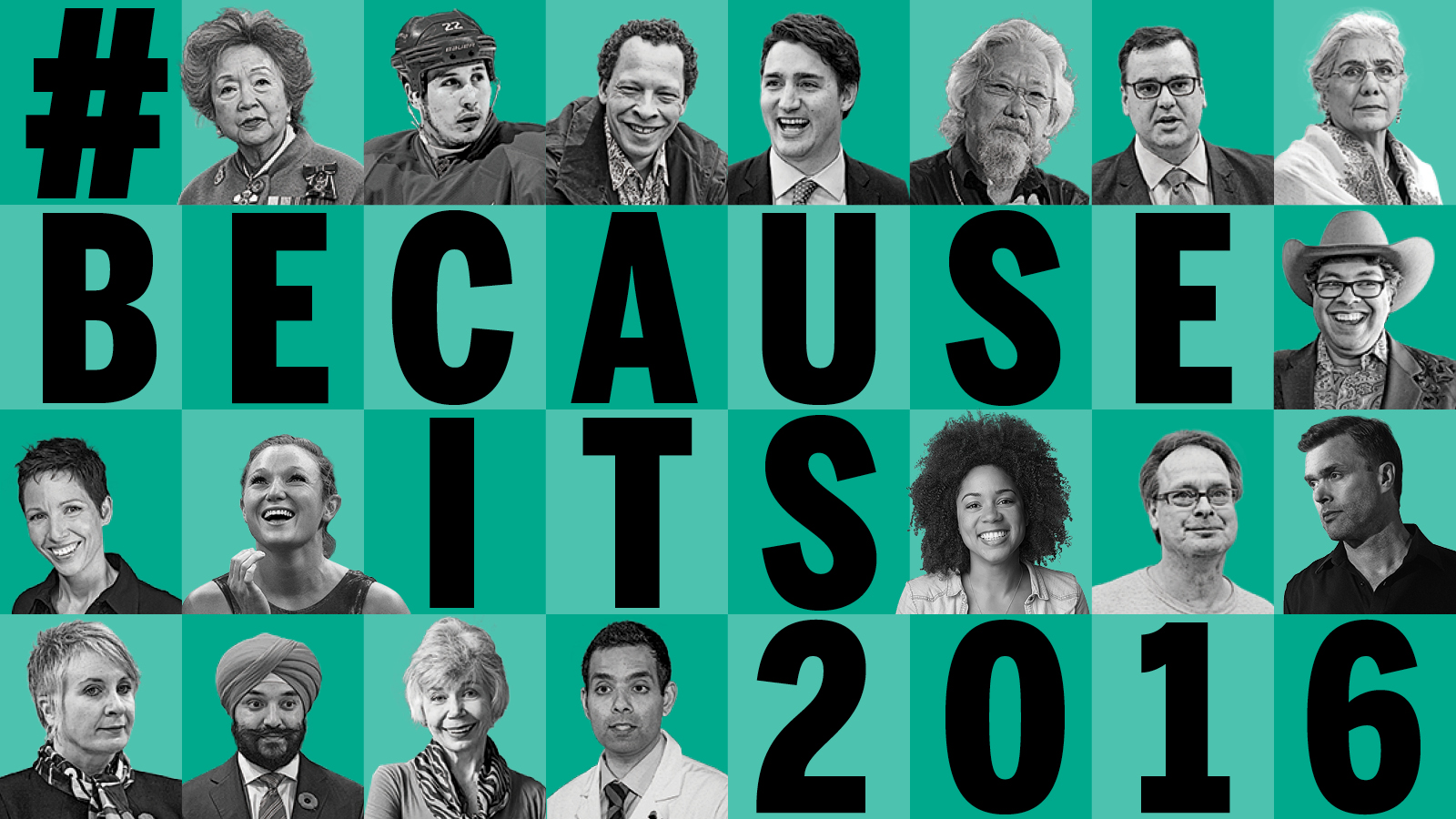 Asked about why a gender-equal cabinet was important to him, Prime Minister Justin Trudeau made waves when he responded: “Because it’s 2015.” It was a statement that signalled a lot in three short words: This was an expectation of something that has long been overdue.

Last year, we asked notable Canadians from the world of politics, business, and entertainment to give us 15 words about what 2015 would hold. This year, we refined our ask: they told us what changes they envision 2016 will bring, the kind of overdue change that they’re hopeful will come at last—#BecauseIts2016. Read their answers below.

Now, it’s your turn. Submit your own 2016 prediction by tweeting with the hashtag #BecauseIts2016 or emailing us. We’ll update this page with our reader favourites. Good luck—and have a great 2016!

View our predictions by field:

Hockey is Canada’s Game. Time to support our females. #BecauseIts2016

Canada should be fully accessible and inclusive for people with disabilities. #BecauseIts2016 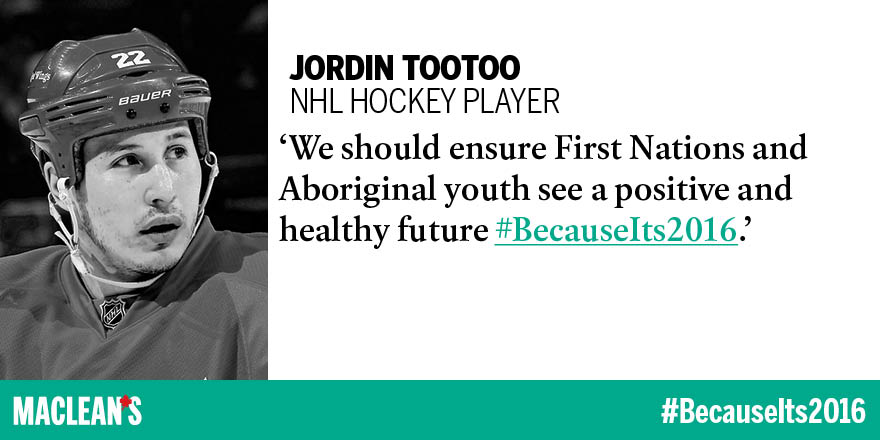 Canada will be an example to the world in fairness, philanthropy, compassion, and diplomacy. #BecauseIts2016

Sport is health. Time for the government to link the two and see the long-term benefits for Canada. #BecauseIts2016 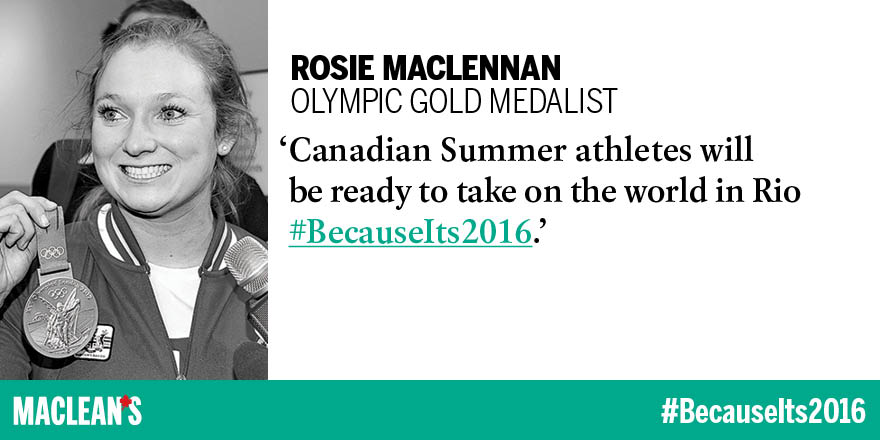 Find your mountain and climb it. #BecauseIts2016

Eliminate big Pharma and we will help solve the epidemic of mental health—the biggest epidemic on the planet! 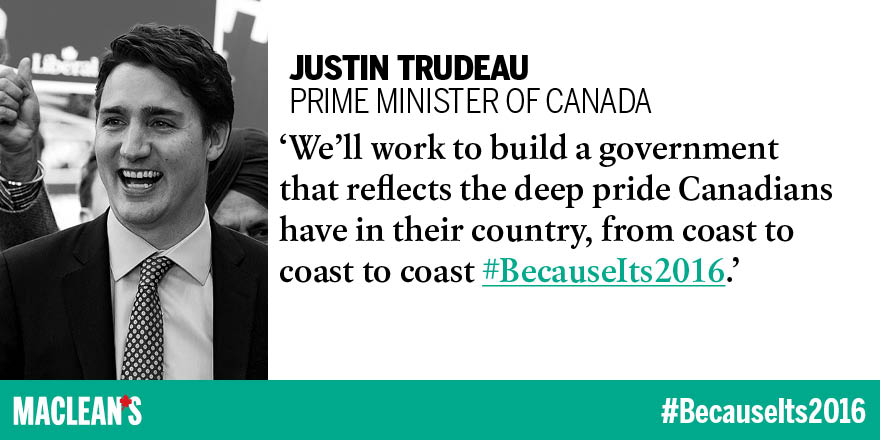 We will make the federal government open by default. #BecauseIts2016

— Scott Brison, President of the Treasury Board

Together we MUST tackle climate change #BecauseIts2016

— Patricia A. Hajdu, Minister of Status of Women 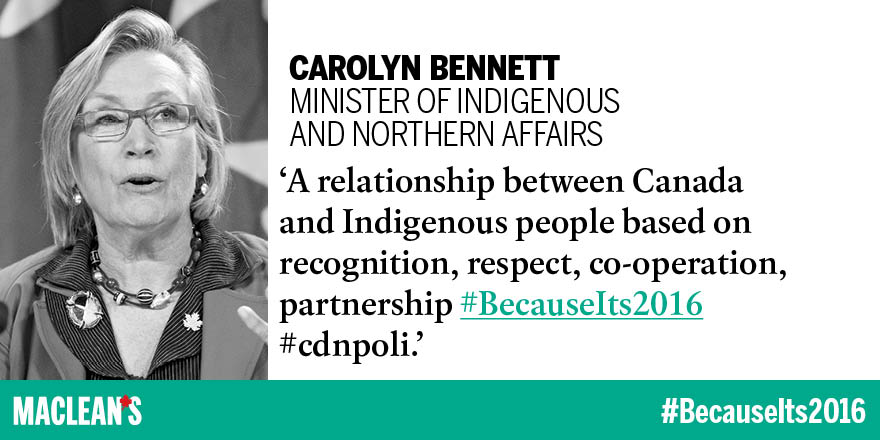 One veteran, one standard. #BecauseIts2016

We are defined by our diversity and guided by our Charter and Canadian values. #BecauseIts2016 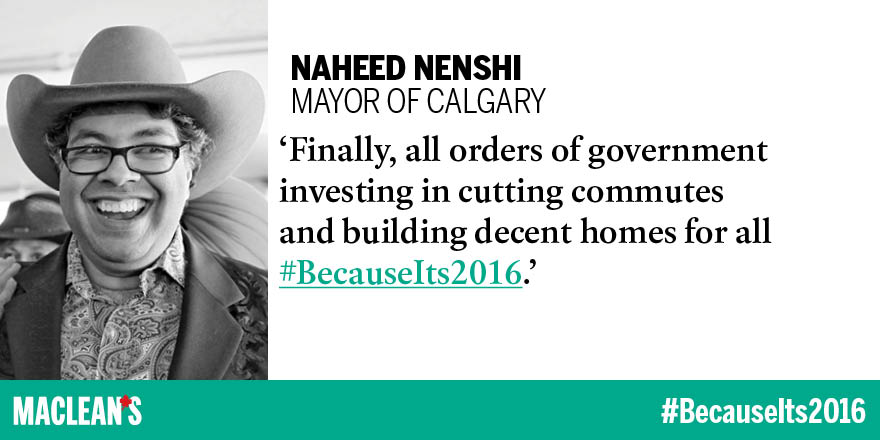 We will champion international aid programming driven by evidence and outcomes not ideology. #BecauseIts2016

By welcoming refugees and much more, Canadians will be proud of what we can accomplish together. #BecauseIts2016 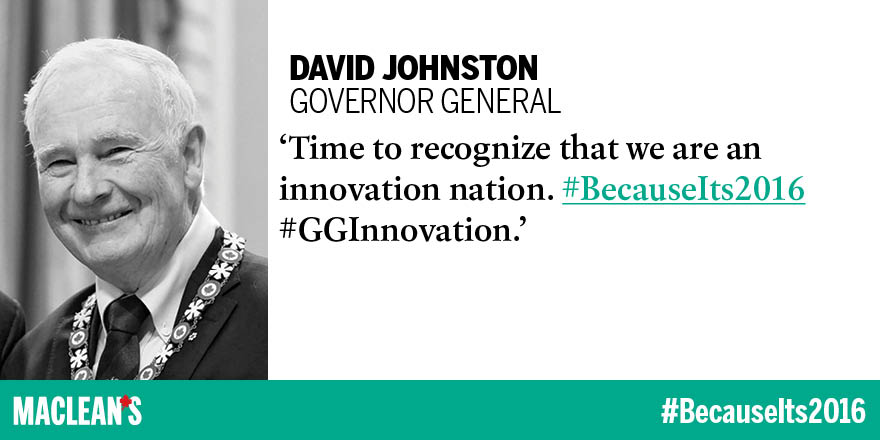 Finally, at long last, have an economic union in Canada by breaking down barriers to internal free trade #BecauseIts2016.

We open our doors to refugees. #BecauseIts2016 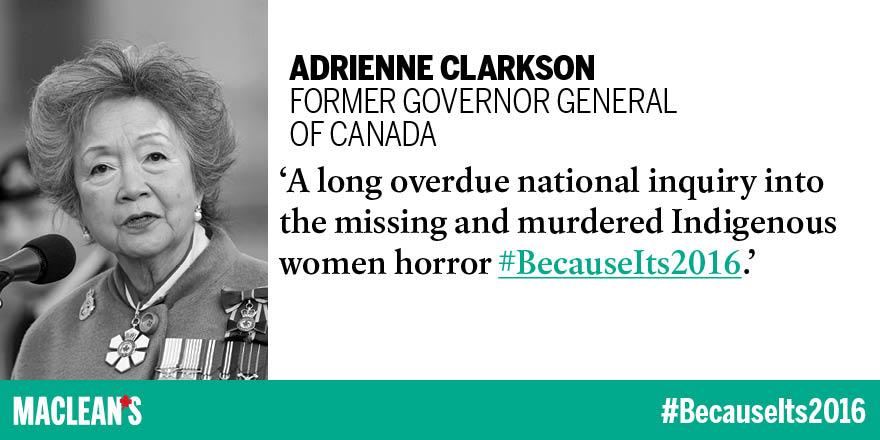 #BecauseIts2016, we need cities across Canada to help consumers and the environment by embracing new technology such as Uber.

Can we please not use slot headed screws for anything anymore, ever? #BecauseIts2016. And why hasn’t the US adopted the Robertson already?!

Canada should tax carbon and invest in the alternatives. #BecauseIts2016

Canada again becomes a country that cares for its citizens and the world at large. #BecauseIts2016 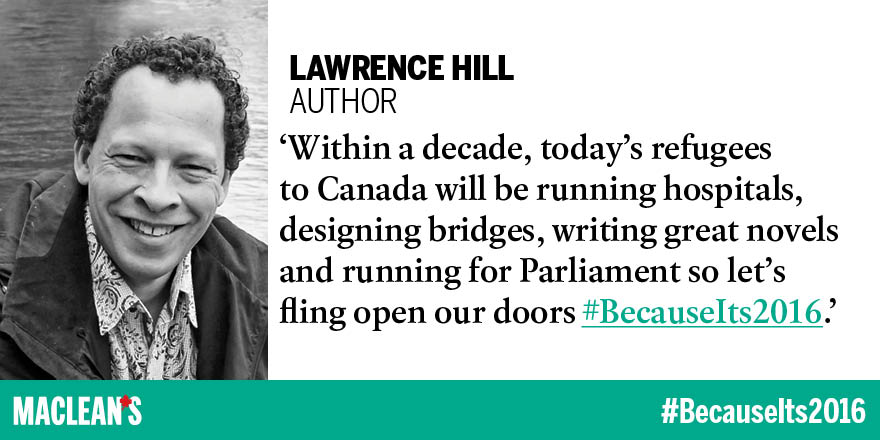 #BecauseIts2016, know where your food comes from!

You can buy a six pack of beer on the way home from work at a corner store in every city, town, village in Canada. #BecauseIts2016 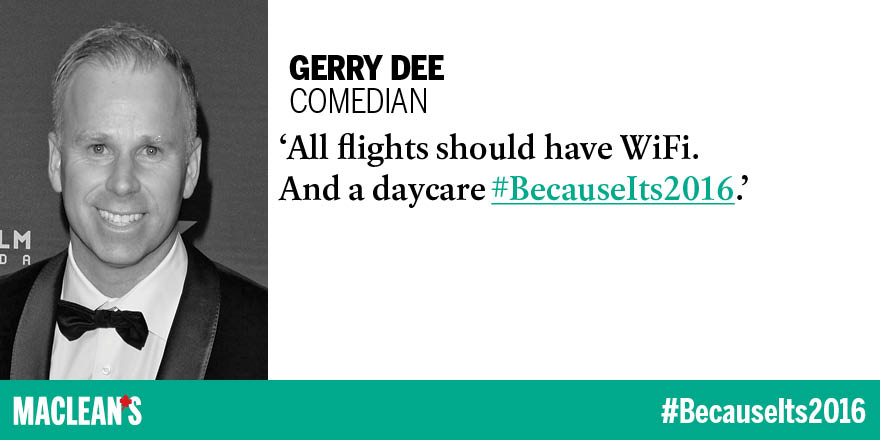 The earth is not our mother and will not care about borders or economies when it shatters humanity with rising sea levels and extreme storms, so let’s brave up and make crucial environmental policies to tackle climate change #BecauseIts2016.

— Meeru Dhalwala, author and chef; co-owner of Vij’s, Rangoli and My Shanti

It was funny the first few times you said it, but quit teasing everyone this year, Boomers, and retire #BecauseIts2016. 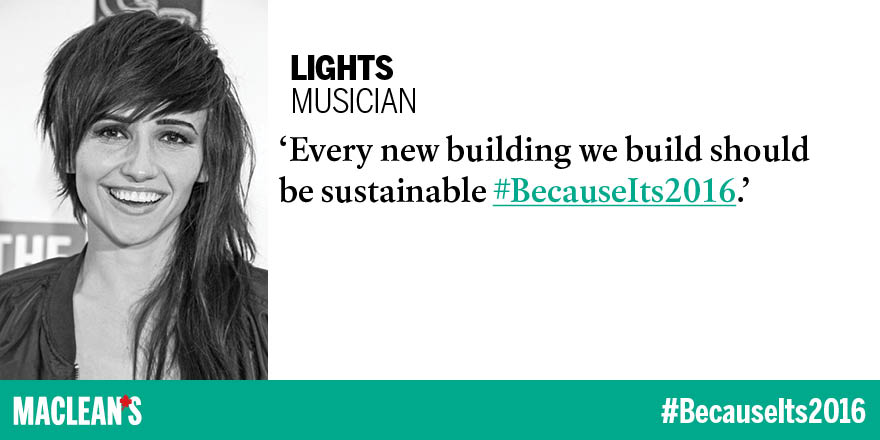 The Canadian entertainment industry realizes they don’t have to wait until talent goes south to recognize them as stars! #BecauseIts2016

Access to basic education and clean drinkable water for all Aboriginal people in Canada. #becauseits2016 not 1916.

All Canadians should be offered equal opportunity #BecauseIts2016.

Every school and university should mandate Indigenous content. #BecauseIts2016

— Wab Kinew, author, musician, broadcaster and associate vice-president at the University of Winnipeg; from the Onigaming First Nation

Create a prosperity strategy based on commercializing high-margin Canadian ideas and intellectual property. #BecauseIts2016, and IP is where the big wealth is.

1 in 3 children worldwide fail to reach their full potential. #BecauseIts2016, Canada should help all children to thrive. 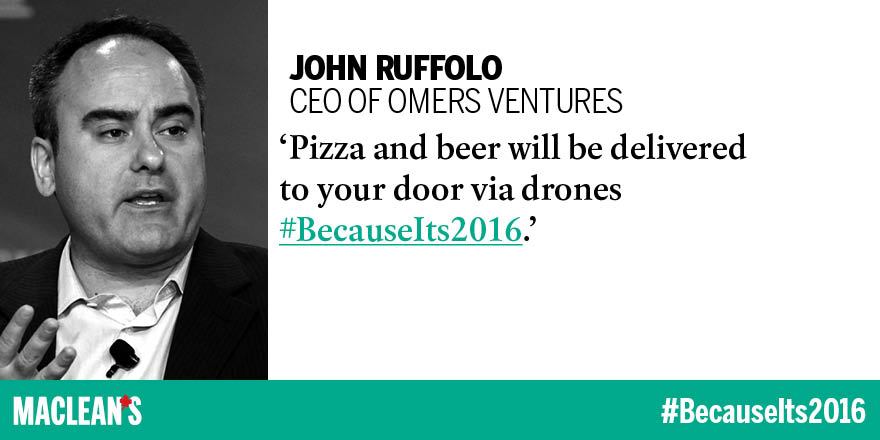 Women should be paid equally to men for same job. #EqualPay #BecauseIts2016

It’s about time the federal government supports the CBC. #BecauseIts2016 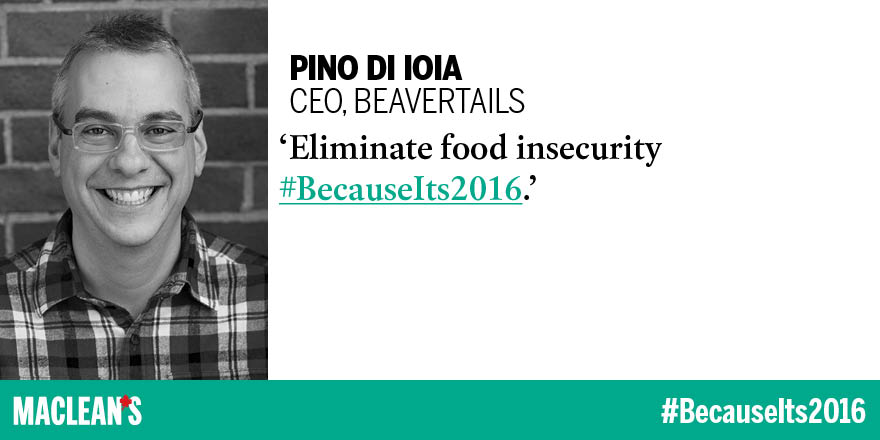 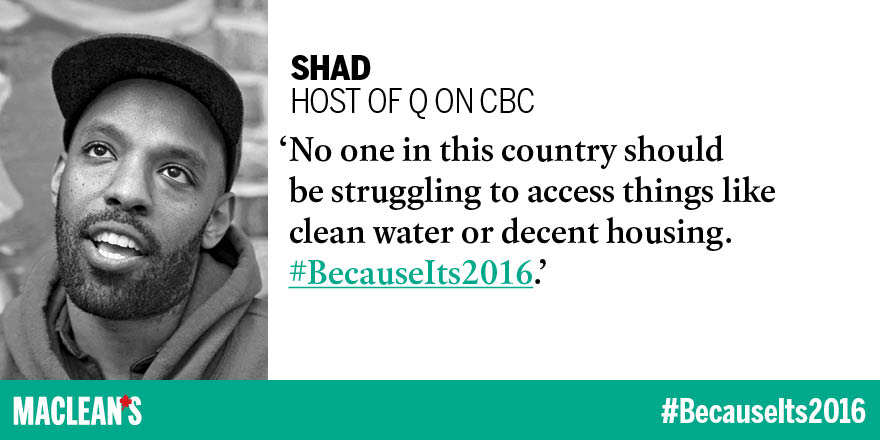 Former Harper cabinet ministers will stop advising the Government of Canada to abandon its election promises in deference to Harper’s policies for two reasons: The Harperions lost decisively, and #BecauseIts2016.

— William Thorsell, former editor-in-chief of The Globe and Mail 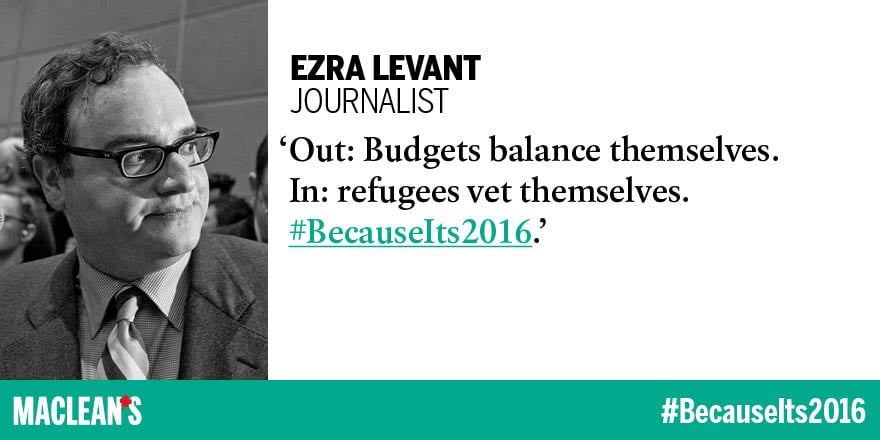 Because it’s 2016 we should keep our rivers, lakes and oceans clean so we can drink, swim and fish sustainably. #BecauseIts2016

— Evan Solomon, host of “Everything is Political” on SiriusFX and Maclean’s contributor

No Canadian should be carded exclusively because of his/her skin colour or physical appearance. #BecauseIts2016

Now that older Canadians outnumber children, learning how to care for them should NO LONGER BE OPTIONAL for our medical and nursing students #BecauseIts2016.

See our world as one, shared place, and help others to see it too. #BecauseIts2016

Let’s use space to push the boundaries of humankind and understand how fragile our planet is. #BecauseIts2016

Why should Canada, the only G8 country still fence-sitting, finally adopt a genetic non-discrimination act? #BecauseIts2016.

– Stephen Scherer, director of the Centre for Applied Genomics at the Hospital for Sick Children 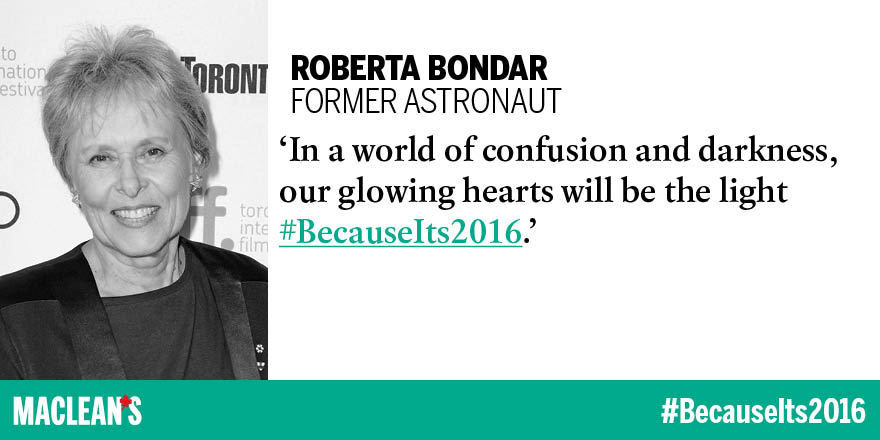 For a question of death or life at the frontline and our shared humanity, even if they treat your wounded enemies, hospitals must not be bombed. #BecauseIts2016 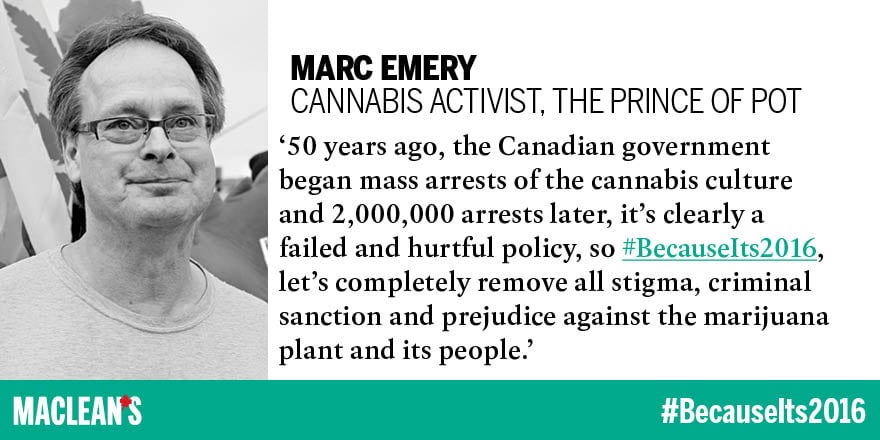 No Canadian should ever again be arrested for cannabis #BecauseIts2016.

Canada should be joining Vancouver and others in planning for a transition to 100 per cent renewable energy. #BecauseIts2016 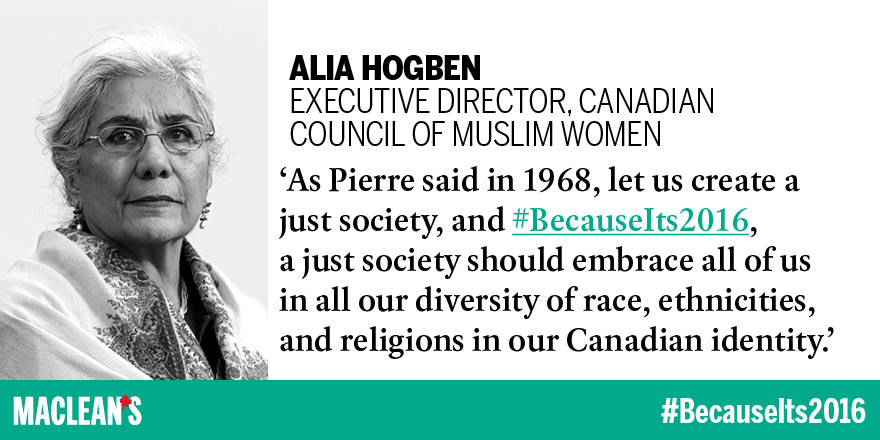 To the extent that freedom and privacy are sacrificed for public safety and security, civilized society—along with innovation and prosperity—will greatly diminish. That is the curse of zero-sum (win/lose) thinking, which must stop now. #BecauseIts2016, we can have both privacy AND security (win/win). 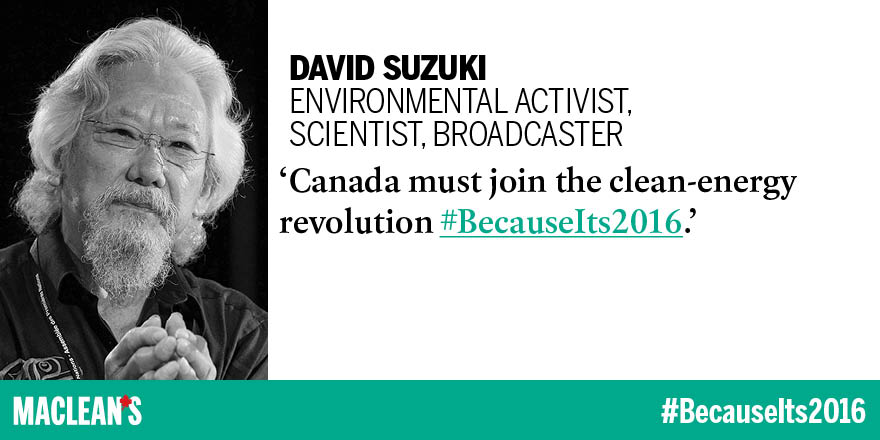 Nobody should ever assume a woman is ‘just a wife.’ #BecauseIts2016

We need to give youths more opportunities to lead #BecauseIts2016. They are the leaders of today, not tomorrow.

All children and youth should be able to discover and achieve their dreams. #BecauseIts2016

— Marlene Deboisbriand, interim president and CEO of Boys and Girls Clubs of Canada

Wash used to be hung out every morning and now a lot of people use dryers. Years come and go…I can’t help it… I will have to take what God gives me #BecauseIts2016.

As humans with the capacity for rational thought, we have a moral obligation to wake ourselves up and to attend to the condition of all peoples and other life forms with compassion, humility, understanding and responsibility. #BecauseIts2016

— Maureen Medved, associate professor at the creative writing Program at the University of British Columbia

People with disabilities will have increased labour market #inclusion. #BecauseIts2016