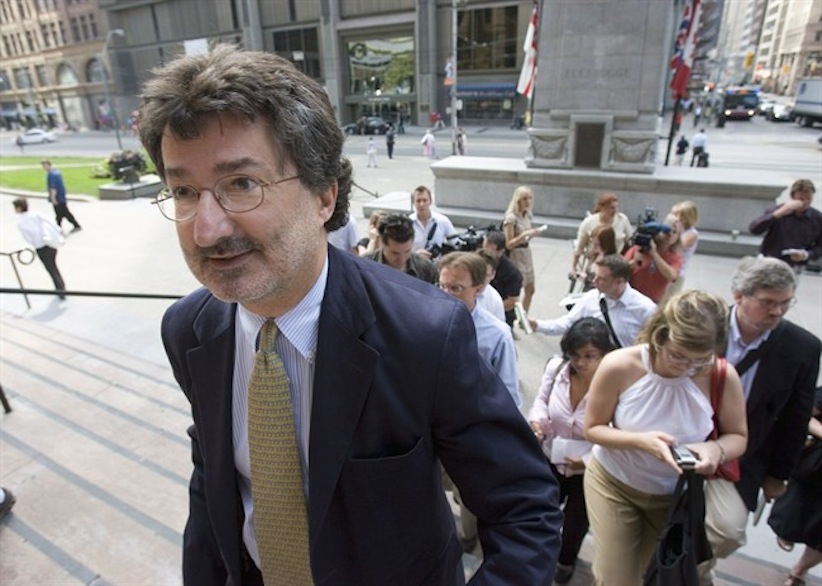 Joe Groia walks back into court in Toronto in 2007. (Frank Gunn/The Canadian Press)

TORONTO – A prominent securities lawyer and the society that regulates the legal profession in Ontario are bound for court in the latest round of an epic battle started in the aftermath of the billion-dollar Bre-X mining fiasco in the late 1990s.

Closely watched by the legal profession, the contest pits Joe Groia, who successfully defended the only person charged in the history-making securities scandal, against the Law Society of Upper Canada.

“There have been few cases, if any, where the (society) has been so dogged and determined to maintain a position that was so damaging to the public and profession as a whole,” Groia argues in court documents.

How he behaved during the tumultuous Bre-X courtroom odyssey is what’s at issue.

The society maintains Groia misbehaved to such an extent in defending Bre-X vice-president John Felderhof that he warranted a two-month suspension and ordered him to pay $247,000 in costs — reduced on initial appeal in March to one month and $200,000.

Among other things, the panel faulted the Toronto lawyer for repeatedly slagging the prosecution.

It also cited critical comments made by several judges involved in the labyrinthine hearings against Felderhof, a geologist, who was ultimately acquitted of fraud. One judge said Groia was “prone to rhetorical excess and sarcasm” and “petulant invective,” while another said he was engaged in “guerilla theatre.”

Groia denies any unprofessional conduct, maintaining he was simply defending his client against a no-holds-barred prosecution.

The punishment handed him, he argues, follows an “unprecedented and dangerous” disciplinary proceeding and should be set aside or, at the very least, new hearings ordered.

Most importantly, he asserts, if the society’s sanctions stand, it could have a chilling effect on the vigour with which lawyers defend their clients in tough cases and could undermine the independence of the courts.

Both sides, claiming the legal and ethical high ground, are firmly dug in in the high-stakes fight involving some of the country’s top-drawer lawyers.

“If the appeal panel’s decision is allowed to stand, it will undermine the independence of the judiciary, interfere with the conduct of proceedings before the courts, and damage the public interest by allowing (the law society) to meddle in trials,” Groia’s factum states.

“Lawyers now face the prospect of ruinous disciplinary proceedings based on alleged ‘incivility’ with no benchmark against which to judge their conduct of a case on behalf of their clients.”

In its cross-appeal filed last week, the society is calling for the initial two-month, $247,000 cost award to be reinstated, saying its own appeal panel made legal errors in reducing the punishment.

The decision by the disciplinary panel that heard the case was “reasonable and entitled to deference,” according to the society’s factum.

Divisional Court is expected to grapple with the case in the fall but it seems unlikely it will stop there, no matter what the decision.

“Joe looks forward to having the serious and important issues raised by this appeal, involving the independence of the judiciary, freedom of speech and the public interest in a vigorous and unfettered defence bar, aired and decided in a court of law,” said Groia’s lawyer, Earl Cherniak.

Coincidentally, the last civil actions arising out of the Bre-X collapse, in which claims of an Indonesian gold find turned out to be bogus, ended with a whimper last week when lawyers for the investors gave up their fight.