A special weekend sitting was convened in Queen's Park to legislate Ontario's public-college faculty back to work. Classes could resume by Tuesday. 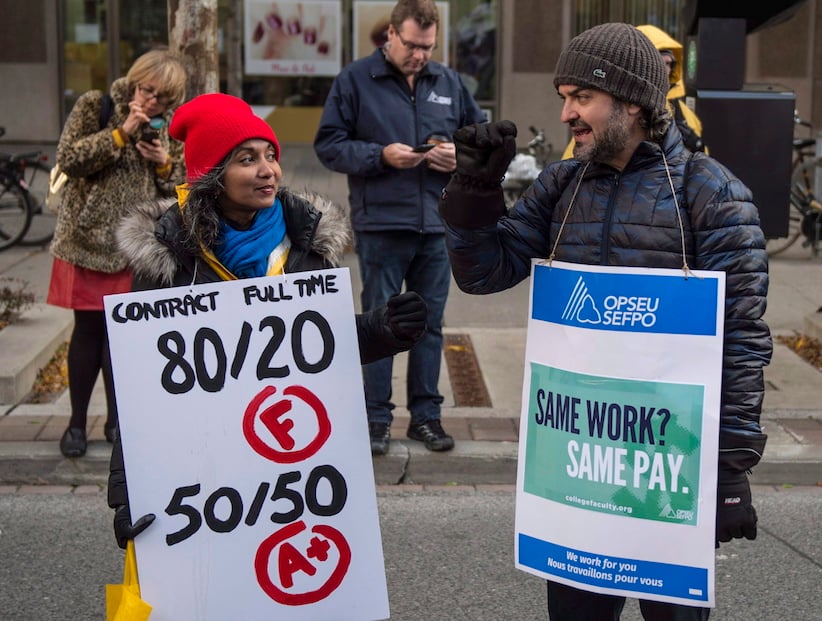 Striking college faculty rally in Toronto on Wednesday, Oct.25, 2017, calling on the province to send college administrators back to the bargaining table. THE CANADIAN PRESS/Thomas campean

TORONTO — Ontario legislated college faculty back to work on Sunday, ending a five-week strike and paving the way for students to return to class on Tuesday.

Colleges are extending their semesters so students don’t lose their terms, but trying to condense five missed weeks into roughly two extra ones will be very stressful, student advocates say.

“It’s going to be a very busy rest of the semester for students,” said Joel Willett, president of the College Student Alliance. “They have indicated to us that they are very frustrated.”

The group is pushing for students who feel they won’t be able to complete their semesters to be able to withdraw and receive refunds, Willett said.

The provincial government has ordered the colleges to create a fund — using savings from the strike, for example by not paying faculty wages — to help students who may be experiencing financial hardship because of the labour dispute. Advanced Education Minister Deb Matthews has estimated that amount would be about $5 million.

“This terrible chapter is over,” she said.

Around 500,000 students have been out of class since the strike by 12,000 professors, instructors, counsellors, and librarians began Oct. 15. The colleges have said they would need two days to restart classes, meaning students will be back on Tuesday.

The colleges welcomed the back-to-work legislation, saying all efforts at the bargaining table had been exhausted.

“The strike has been incredibly disruptive to students and we needed to end it,” Sonia Del Missier, the head of the colleges’ bargaining team, said in a statement.

The Ontario Public Service Employees Union says it is looking at the possibility of a constitutional challenge to the legislation.

“On the face of it it’s a violation, but there’s of course many wrinkles,” said president Warren (Smokey) Thomas. “We will challenge it in one form or another.”

Matthews lamented what she characterized as unnecessary procedural delays by the NDP in getting the back-to-work legislation passed.

The Liberal government first attempted to introduce and pass its back-to-work bill in one fell swoop Thursday evening, after restarted talks between the colleges and the faculty’s union reached an impasse.

But unanimous consent of all parties was needed, and the NDP refused, leading the government to introduce the legislation on Friday and debate it through special weekend sittings. If it had been passed Thursday, students would have returned to class Monday instead of Tuesday.

“For people who have classes on Monday it’s another week that the strike has been delayed, so it is real,” Matthews said. “It is a meaningful delay and completely unnecessary.”

But NDP Leader Andrea Horwath said she disagreed with that assessment. The NDP needed to do due diligence, she said, including actually reading the bill.

“There is no person, I think, in Ontario that would sign a contract without reading it, so there was no way that could have happened on Thursday,” she said. “I was not about to pass legislation that I hadn’t seen.”

Horwath slammed Matthews for letting the strike drag on for five weeks in the first place, but Matthews said the government let the two sides try to hammer out a deal for as long as they could.

“But when they came back and said, ‘There is not a glimmer of hope, we are in a deadlock,’ that was when we moved to save the semester for students,” she said.

The legislation sends all outstanding issues to binding mediation-arbitration.

The colleges have said their final offer included a 7.75-per-cent salary increase over four years, improved benefits and measures to address concerns regarding part-time faculty, with language surrounding academic freedom remaining as the only major outstanding issue.

But the union said the offer contained “serious concessions” that were not agreed to, which would erode faculty rights and contribute to an unsustainable staffing model.