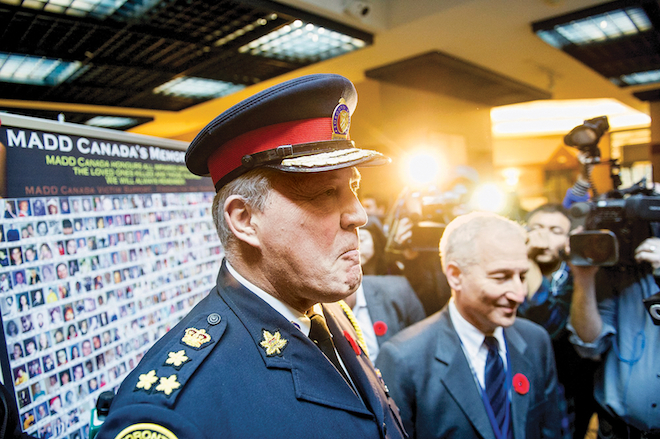 TORONTO — Toronto’s top police officer, Bill Blair, who has been a frequent target of Mayor Rob Ford’s wrath, will lose his job in April after the police services board on Wednesday rejected his request to renew his contract.

The board offered no substantive reasons in a statement announcing its decision.

“After considerable discussion related to the Toronto Police Service’s continuing need for organizational renewal, the board has decided not to renew the employment agreement of Chief Blair,” the board said.

“The board extends to Chief Blair our sincere gratitude for his outstanding record of public service and inspiring leadership.”

Blair had little to say in response to the statement.

“All that he’s saying is that he wants to thank the board for its consideration,” said Blair’s spokesman Mark Pugash.

“He will have plenty of opportunities to address the issues as time goes on.”

The tall strapping police chief found himself the target of Ford’s anger over an ongoing police investigation into the mayor that, among other things, turned up a video apparently showing him smoking crack cocaine.

At a news conference announcing retrieval of the video last October, Blair said he was disappointed at what it showed.

Ford, who later admitted to smoking crack cocaine in a “drunken stupor” and took time out for addictions treatment last month, repeatedly said the probe into his activities was politically motivated. He publicly accused Blair of wasting taxpayers’ money with the investigation.

The mayor also challenged the chief to arrest and charge him, prompting Blair at one point to call in provincial police to oversee the investigation.

“If he’s going to arrest me, arrest me,” Ford said in February. “I have done nothing wrong.”

On Wednesday, however, Ford had little to say after the board’s decision. He did strike a somewhat conciliatory tone.

“I want to thank Chief Bill Blair for his service to the people of this great city for the last 10 years,” Ford said at city hall.

“This is a decision that was made strictly by the police services board. That’s all I can say.”

In its statement, the board said it would turn its mind now to finding a successor to Blair, who began as police chief in April 2005, replacing Julian Fantino, currently federal minister of veterans affairs.

He was in charge during the tumultuous G20 summit in June 2010 in which police arrested more than one thousand people in what critics denounced as one of the largest abuses of civil liberties in Canadian history.

More recently, he called in retired Supreme Court of Canada justice Frank Iacobucci to investigate police shootings of the mentally ill and people in crisis. Iacobucci released his report last week, and Blair promised to ensure every one of the 84 recommendations would be implemented.

Despite refusing to keep him on, the board praised Blair for his “long and distinguished” career in policing.

“He is widely viewed as a champion of community policing and a leader in law enforcement around the world,” the board said.

“He has demonstrated his commitment to issues of human rights, diversity and integrity, among many others, and has served Toronto admirably and tirelessly.”