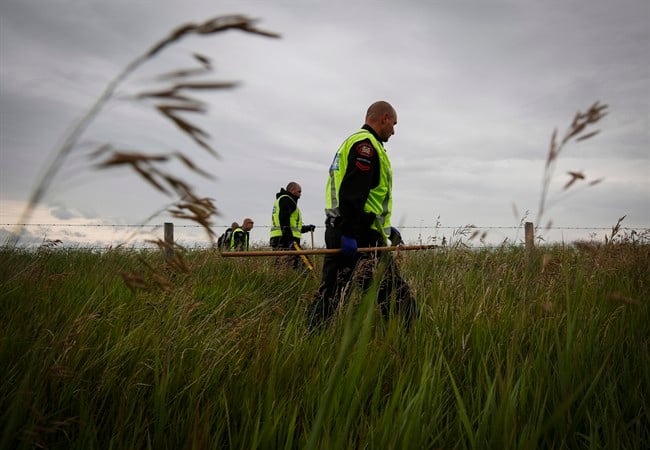 CALGARY – Hopes of finding a missing five-year-old girl alive vanished Thursday after searchers combing through a rural property found a body believed to be that of Taliyah Leigh Marsman.

At a sombre news conference, Calgary police revealed that by the time they were called earlier this week, the tyke was already dead.

They also announced they had charged a suspect, Edward Delton Downey, 46, with the murders of the girl and her mother, Sara Baillie, 34.

Baillie’s body was found Monday night in the home she shared with her little girl.

The next day, an Amber Alert was issued.

But on Thursday afternoon, searchers near Chestermere, Alta., found the girl’s body near a roadway and police issued a news release cancelling the alert.

The cause of death was not known; an autopsy will be held Friday.

“It’s disappointing,” said Insp. Don Coleman. “We were hoping for a different outcome. The family is devastated, clearly.”

Over the last few days, police and relatives alike had tried to stay positive, pleading with whoever had the girl to return her unharmed.

Police even warned that it would be in the person’s best interest not to harm Taliyah, noting that prisoners in jail do not take kindly to those who harm children.

On Wednesday, a suspect was taken into custody at a strip mall.

Coleman said the man was believed to be the same one witnesses saw Monday with a girl matching Taliyah’s description, adding he was giving “zero co-operation” to investigators.

Coleman also said the suspect was known to police and had an extensive criminal background with some violence.

Downey, who also goes by the last name Simmons, appeared before a judge late Thursday. He was ordered to have nothing to do with the child’s estranged father, Colin Marsman.

Police said it’s believed Downey was known to both parents and the child.

There had been a “limited” history of domestic violence in the family, but police said Marsman co-operated with the investigation and issued his own plea for his little girl to be returned.

Relatives had described Taliyah as a vivacious and curious curly-haired child.

Baillie’s uncle, Scott Hamilton, had said his niece was single-handedly raising Taliyah, who was described as much more mature than her five years.

He described the two as “inseparable” and said Taliyah “worshipped” her mother.

“Taliyah referred to Sara as Mama and it wasn’t necessarily like a mother-daughter relationship,” he said at a tearful news conference earlier in the week. “It was almost like watching two sisters at times get along.”

The mother’s Facebook page showed a photo last week of Taliyah at the Calgary Stampede, smiling in a white hat and riding a straw bale pony.

The page also carried a video of the little girl reading a book, with her mother writing: “She fills my heart with so much joy.”