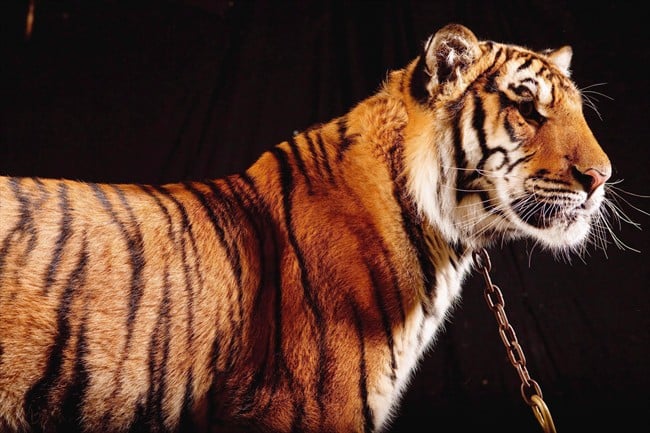 Jonas the Bengal tiger is shown in an undated photo from the Bowmanville Zoo, released on June 18, 2010. An Ontario zoo that recently came under fire after animal cruelty charges were laid against its owner says it will close its doors this fall. THE CANADIAN PRESS/HO, Bowmanville Zoo

BOWMANVILLE, Ont. – An Ontario zoo that recently came under fire after animal cruelty charges were laid against its owner says it will close its doors this fall.

The Bowmanville Zoo — famous for providing animals for Hollywood movies — says attendance is down “catastrophically” and that there simply isn’t enough money to run the facility east of Toronto.

Zoo spokesman Angus Carroll blamed the drop in attendance on allegations by People for the Ethical Treatment of Animals that led to animal cruelty charges against owner Michael Hackenberger after video surfaced that appeared to show him hitting a tiger named Uno with a whip during a training session.

“The untrue allegations made by PETA in regards to a tiger incident have created a climate in which the zoo can no longer operate,” Carroll wrote in a statement. “People are staying away because they believe PETA’s allegations.”

In April, the Ontario Society for the Prevention of Cruelty to Animals charged Hackenberger with four counts of causing an animal distress and one of failing to comply with the prescribed standards of animal care, all under the authority of the provincial OSPCA Act.

Hackenberger has denied the allegations and is expected to fight the charges.

Carroll said the zoo supports Hackenberger and believes he is innocent.

PETA previously told The Canadian Press the organization began looking into Hackenberger after he was seen on live television in Toronto last summer angrily cursing an unco-operative baboon that resisted riding a miniature horse.

The zoo said it is hopeful it can place all of the animals elsewhere, but expects the process to take up to a year.

It isn’t a one-day affair to close down a zoo and dozens of employees will lose their jobs, Carroll said.

Many of the Bowmanville Zoo’s animals appeared in a variety of Hollywood movies. One of the zoo’s tigers, Jonas, is famous for his part in the movie adaptation of “Life of Pi.” And many of its animals, including tigers, can be rented out for events or private encounters, according to the zoo’s website.

The zoo was established in 1919 and claims to be the oldest private zoo in North America.

Hackenberger is to make his next court appearance later this summer.

He faces a maximum fine of $60,000, two years in jail and a lifetime ban from owning animals if convicted.