MACLEAN'S LIVE: The latest on the shooting in Ottawa 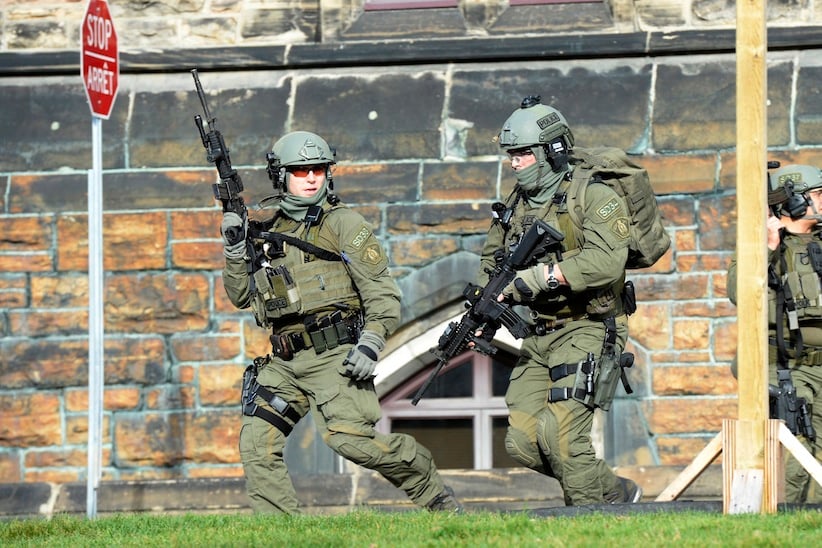 Downtown Ottawa is locked down after gunshots were fired at the National War Memorial and, soon after, in the halls of Centre Block. A soldier on guard at the war memorial is dead, and authorities also shot and killed a suspected gunman. Follow Maclean’s reporters for live coverage. Michael Petrou, Paul Wells, Aaron Wherry, John Geddes and Nick Taylor-Vaisey are on the scene. Here’s an initial report from the Canadian Press. Our livestream and liveblog follow. We’ve stopped liveblogging for the evening but will resume tomorrow morning.

OTTAWA – A gunman turned the nation’s capital into an armed camp Tuesday after gunning down an honour guard at the National War Memorial and then shooting up Parliament Hill.

The extraordinary scene ended with the assailant shot dead in the polished marble halls of parliament’s Centre Block, apparently by the sergeant-at-arms of the House of Commons, while SWAT teams combed the busy parliamentary precinct in an ongoing but fruitless search for accomplices.

Slain reservist Nathan Cirillo of Hamilton, Ont., is the second member of the Armed Forces this week to die in an apparently random, murderous attack, even as Canadian war planes are deployed in Iraq.

Two Canadian soldiers were run over — one of them fatally — in Quebec on Monday by a man with jihadist sympathies.

The identity of the slain shooter was not immediately released by police.

“It’s way too early to be able to determine a motive,” Gilles Michaud, the assistant commissioner of the RCMP, said at a news conference in Ottawa while police were still clearing downtown buildings.