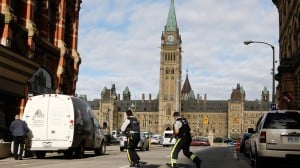 OTTAWA — An internal government report shows federal workers deleted emails alerting them to last October’s shooting on Parliament Hill because they thought the messages were spam.

Those alerts didn’t reach everyone who needed to see them because of a crisis communications system that is “outdated” and has “limited connectivity,” according to the documents obtained by the Canadian Press.

Cell service was also spotty since government systems were overwhelmed on the day of the shooting, meaning emails didn’t get through.

The documents from Agriculture and Agri-Foods Canada, released under the access to information law, says not every department followed orders to lock down their Ottawa offices.

The report, provided to Agriculture Canada’s deputy minister as part of a December briefing note, says some government departments ignored a lockdown. Other departments with offices in the same building as Agriculture didn’t force their workers to stay sheltered in their offices, the documents say.

In a separate questionnaire, the department told the Government Operations Centre that briefings and security reports during the day didn’t help it make timely decisions, pointing to ongoing communication problems.

Agriculture officials wrote that there were delays in receiving messages from the operations centre; those messages were not always clear and at times inconsistent; and a digital portal set up to deal with emergencies “was slow and was not used in any meaningful way.”

On Wednesday, the public will get its first look at two reports on how security forces on Parliament Hill reacted on the day of the shooting.

CBC News says that review will show the gunman, Michael Zehaf Bibeau, was shot 31 times, including a fatal shot to the back of the head.