More than pancakes and Smithbilt hats, this year's Stampede was an election dress rehearsal with plenty at stake 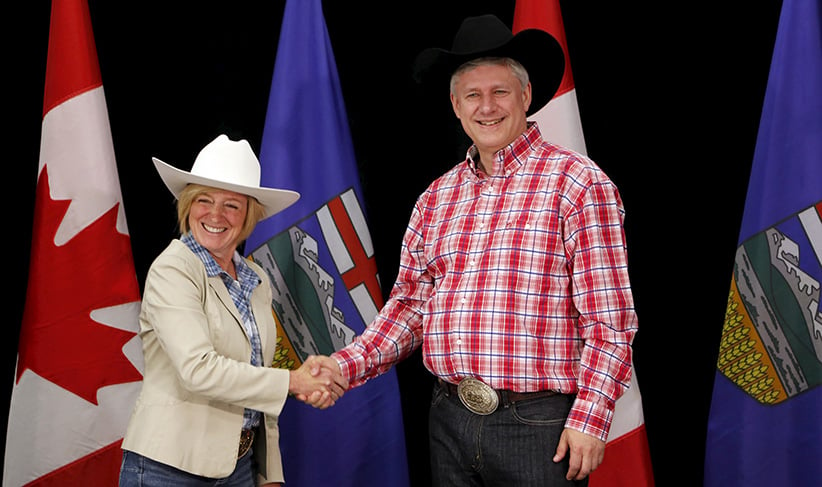 There will be more pancakes to flip, parades to attend and barbecues at which to listen reassuringly while Jane and Duane Average talk through burger mouthfuls, but, for the federal party leaders, the Calgary Stampede is the royale with cheese of the summer’s political calendar. It’s not just that leaders skipping the Stampede get dismissed by locals as rude and by pundits as not ready for the job; a nation will scrutinize their attempts to credibly dress like urban cowpokes. Sartorial failure will go as viral as a Stanfielded flapjack flip.

The 2015 show felt like it mattered much more, as the costumed rehearsal for the fall’s election campaign. It wasn’t just a quaint visit in an area that’s typically not much up for grabs, and a city where the last hope for change came in the Paul Martin 2004 race. Any “NDP and Grit leaders visit Conservative heartland” lines rang stale this year, especially with NDP Premier Rachel Notley riding horseback in the Stampede parade.

Typical Conservative electoral math counts on nearly running the table in Alberta, but the ThreeHundredEight.com poll aggregator predicts the NDP can win five of 34 seats, and the Liberals four. Nine Alberta seats in progressive hues are about as unprecedented as the provincial New Democrat majority that helped till this fertile ground: There have been 10 non-conservative MPs elected here over the last 50 years, going back to Lester Pearson.

Stephen Harper, Justin Trudeau and Thomas Mulcair found plenty of room in the hay-bale-festooned city to mould the Stampede into their own campaign messages.

At the Prime Minister’s annual Conservative barbecue, the bathroom lineup had hockey-intermission levels of gender imbalance, as many men and some ladies there marvelled. If there were any doubt that the best red meat would come from the lectern, Health Minister Rona Ambrose offered a pre-meal prayer asking for the safety of soldiers who defend against “barbarous attacks.” Grace.

Harper’s 3,000-word speech began with a focus on budgeting, parental benefits and infrastructure, but he got more standing ovations for international lines-in-the-sand remarks on Islamic State, Israel and Ukraine. Last year’s speech focused scorn on Trudeau. This time, Harper gave public broadcaster-like equal time to dissing NDP and Grit rivals as “way out there” on taxes and security. It’s hard to punch with two hands in the same direction, but Harper tried his best.

Some partisans tittered with laughter when Harper briefly mentioned Alberta’s current situation. The PM avoided acknowledging the leftward tectonic shift: “Let me assure you that, with that Alberta can-do attitude and a national government that is on our side, this province will come back stronger than ever.” The only NDPer mentioned in his speech was bearded. Earlier, he told CTV that Calgary oil’s price drop was probably a bigger deal than Alberta’s political change.

Privately, Tories worry that seats in Edmonton may go orange and some in Calgary red. Candidate Len Webber in Calgary-Confederation says he campaigns like he’s one vote behind, but wouldn’t say which party is one vote ahead. “I think [the NDP win] was just more of a message to the PC party here,” says Webber, who left as a Tory MLA before Jim Prentice’s zeppelin combusted.

Meanwhile, after a guy increasingly comfortable in Calgary held a nine-minute media scrum on the parade sidelines, Trudeau’s handlers advised reporters that a later event at a northeast Calgary mosque would be more newsworthy. There, a live backdrop awaited. “I’m extremely proud to highlight an extraordinary diverse team of candidates that are a reflection not just of Calgary, but of Alberta and Canada itself,” Trudeau said. 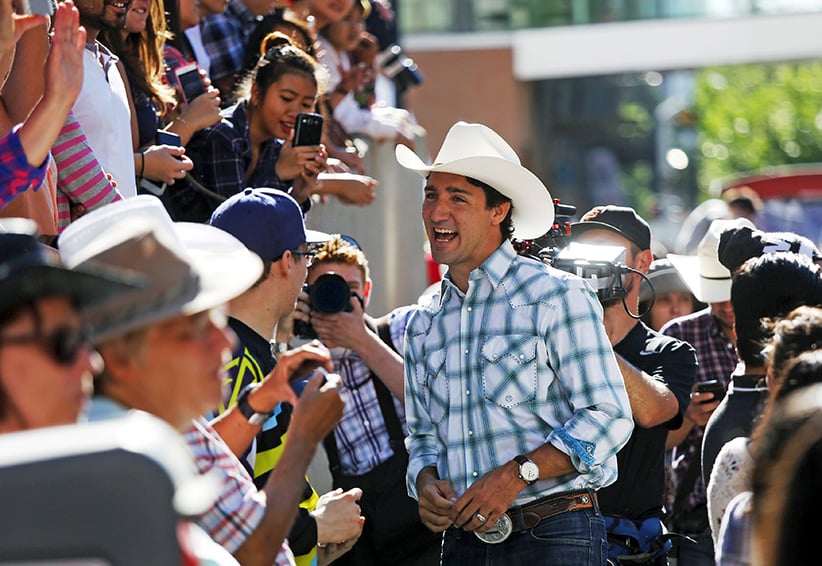 There they were: young woman in hijab, older man in red turban, slender white man in clergy collar, South Asian woman, two others. Liberal.ca reveals their names, backgrounds and ridings, none of which Trudeau bothered mentioning. The backdrop existed to make two points: that Trudeau is about diversity, and that he’s got a solid team.

The former approval-ratings leader, however, is no faded star. Before one event, he spent about 10 minutes meeting Ailine Hess, a retired teacher and party door from Hamilton who won the “Meet Justin Trudeau at the Calgary Stampede Sweepstakes.”

“It was wonderful. We talked about family, how hard it is to travel, and what he values and feels is important to the party and the election,” she said afterward.

Trudeau depicts Alberta’s NDP turn as “openness to change,” but Calgary Liberals fret that Mulcair may be the new It Boy. Some hope the new premier sputters by autumn, and the NDP’s federal bump fades.

As for that leader atop the national polls: It turns out, that great question period prosecutor has a wife. And grandkids. And, on a hot day, the need to change his shirt a couple of times. For his fourth Stampede, he took three Mulcair generations on a Lammle’s Western Wear shopping spree for a weekend of displaying his warm family side, lest rivals pound on the old “Angry Tom” theme. Grandpa Tom continually gushed about having pink-hatted Juliette and straw-hatted Raphaël in tow. He preferred spouse Catherine Pinhas at his side for the cameras, and to squeeze in references to his $15-a-day child care and minimum-wage plans wherever possible. 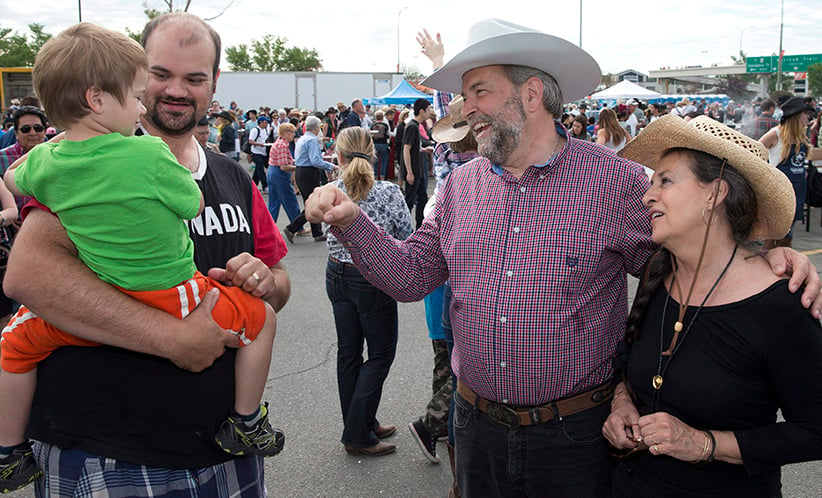 There were federal Liberal and Conservative Stampede events, but the head of a party long irrelevant here had to find his own fun. Mulcair spent family afternoons on Stampede grounds, opting for the farm fair, Buckaroos zone and Superdogs, rather than the rodeo and its calf-roping. He referred to Notley’s team in first-person plural, giving him hope in the politically possible: “People said we’d never break through in Quebec, and we did. People said we’d never form government in Alberta, much less a majority one,” he said.

Good luck finding a side-by-side picture of that Western-clad “we.” The premier has kept a respectful public distance from Mulcair since she began her ascent. The day after Mulcair left town, Notley told reporters she wasn’t sure if staff had scheduled any meeting time for the pair.

Unless the province somehow reverts to the “heartland” days, Mulcair and others will go beyond making token visits back to Alberta over the next three months. Hats optional the rest of the way.