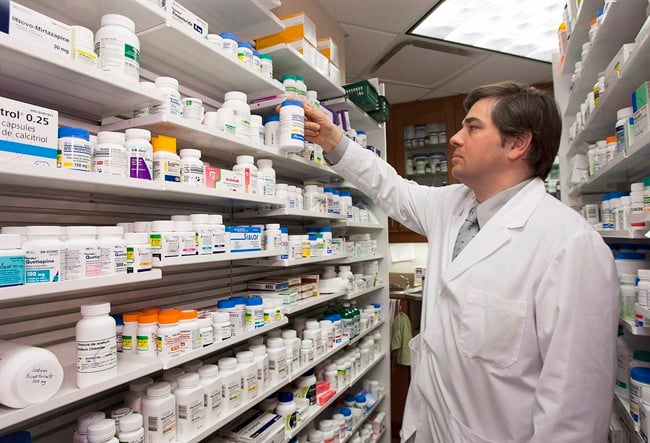 Pharmacist Denis Boissinot checks a bottle on a shelf at his pharmacy on March 8, 2012 in Quebec City. It’s a buzzword in the medical community, although one that hasn’t quite caught fire yet with Canadians at large: pharmacare, a national program that would see prescription drugs covered through a publicly funded system rather than out of pocket. (Jacques Boissinot/The Canadian Press)

OTTAWA – It’s a buzzword in the medical community, although one that hasn’t quite caught fire yet with Canadians at large: pharmacare, a national program that would see prescription drugs covered through a publicly funded system rather than out of pocket.

Many doctors are clamouring for it. Canadians dream of it when faced with sky-high drug costs as they fight cancer, diabetes, heart disease and other illnesses. Even private insurers aren’t entirely opposed.

And now politicians are starting to take up the cause. The federal NDP is calling for national pharmacare, while Ontario’s new health minister has emerged one of its most enthusiastic cheerleaders as he urges a federal strategy.

“I can’t tell you how many times I’d have to go into the sample drawer, because I knew if I gave a prescription to someone, they weren’t going to fill it because they couldn’t afford it,” Eric Hoskins, who’s also a physician, said in a recent interview.

A successful public health-care system isn’t just about access to a family doctor or an MRI, Hoskins says.

“It’s also about being able to access the drugs, and if there’s a barrier to that, we’re not meeting that standard of a truly public health-care system …. Pharmacare speaks to Canadian values of fairness and equity and access.”

Canada, with its aging population, is the only industrialized nation with universal health insurance but no public coverage of prescription drug costs.

An estimated one in 10 Canadians can’t fill prescriptions because of the expense. The Organization for Economic Co-operation and Development has also found that Canada has the second highest per capita spending on prescription drugs in the OECD.

That’s largely because there’s no national standard for drug coverage or drug purchasing in Canada. The patchwork of provincial and territorial health-care systems means Canadians with life-threatening illnesses are confronted with costs that can vary wildly from province to province.

Even if ailing Canadians have private drug coverage, their insurers may refuse to reimburse them if the medications aren’t considered to be offering value for money. Many medications, especially so-called orphan drugs that are prescribed for rare illnesses, are exceedingly expensive in Canada.

“On pricing of medications, we pay way too much in Canada, especially for generic drugs — both public plans and private plans are paying prices that are far too high because of the way we have established how we pay for the drugs,” says Danielle Martin, a physician and vice-president of Women’s College Hospital in Toronto.

“And it’s amazing how the discounts start coming in. Other countries and health systems get staggeringly lower prices than we do.”

Canada also fails to buy drugs in bulk, the way the other OECD countries do — although the provinces and territories have started to work together on bulk purchasing, Martin says.

“Everybody knows if you buy your toilet paper in those packages of 40 rolls, you pay less per roll than if you go to the corner store and buy two rolls at a time — it works the same with medications,” she said.

But in Canada, there are dozens of different purchasers for the same drugs — private employer plans, public plans and hospitals among them.

“If we could pool our purchasing power, and buy drugs in bulk for everyone, again we could negotiate much lower prices — so much lower that there are very solid economic estimates that suggest we could buy …. a number of drugs used for chronic diseases for every Canadian who needs them for no more money than we’re currently spending.”

A recently released study commissioned by the Canadian Federation of Nurses Unions determined there are potential savings of up to $11.4 billion a year for Canadian taxpayers via pharmacare due to decreased drugs costs and reduced administration fees.

Pharmacare would also improve access to an array of prescription drugs for aging Canadians, the study found.

Federal Health Minister Rona Ambrose didn’t commit to a national strategy last week when pharmacare was raised as she met with her provincial and territorial counterparts in Banff.

“It did come up, and we discussed it quite a bit in the scope of looking at how we can work together to purchase drugs across the country,” she said as the conference wrapped up.

“The provinces and territories have come together on bulk purchasing and have saved Canadian taxpayers literally hundreds of millions of dollars …. So that’s the beginning of the conversation.”

Stephen Frank, vice-president of policy development and health for the Canadian Life and Health Insurance Association, says private insurers are stung by high drug prices too. About 60 per cent of Canadians have private drug coverage, most through their employers.

“The issue for us, though, is that what the provinces have done to date is positive for the public plans across Canada, but they have not included employers in those savings. Private insurers are ready to engage in these dialogues and to do our part to improve things; we just need to be included in the discussion.”

“So it’s a completely new world and everyone is struggling with how to deal with it … the more you work together, the more you can spread those costs and manage it. A national strategy serves us all.”

Martin says she’s more optimistic than ever that a pharmacare system is afoot.

“All of the signs are really positive. It’s one of those situations where the case has been so strong for so long, but somehow there’s been a political shift that is changing the conversation.”