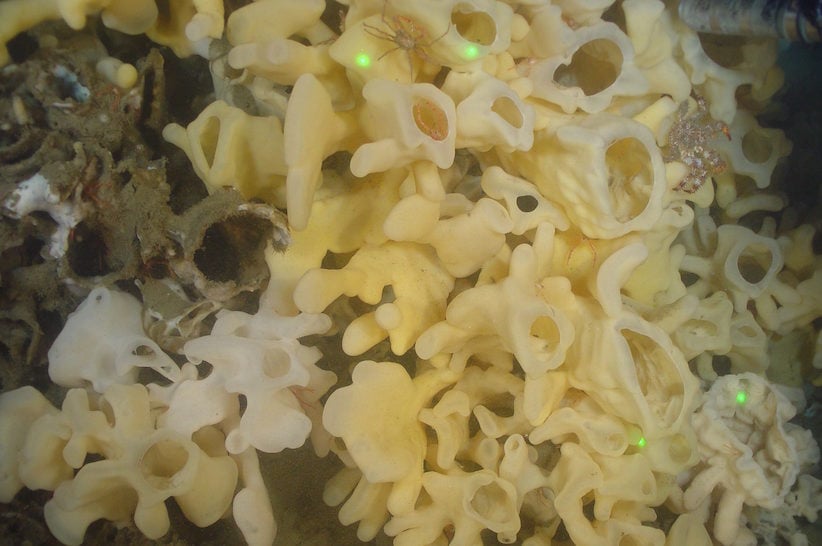 Glass sponge reefs in British Columbia’s Hecate Strait that were once considered extinct are now the focus of a federal protection effort that a conservation group calls too weak to save the fragile undersea treasures.

The delicate growths are the world’s only living examples of the large sponge reefs that have been around since the Jurassic Period. The B.C. reefs date back more than 9,000 years, and when scientists made the discovery in Hecate Strait, the find was compared to locating a herd of dinosaurs roaming on land.

Some of the white-, grey- or taupe-coloured sponges resemble coral, while others look like delicate Elizabethan neck ruffles or the pleated tulle of a ballerina’s skirt.

The Department of Fisheries and Oceans moved Friday to declare the area where the reefs are located in Hecate Strait and nearby Queen Charlotte Sound off Haida Gwaii as marine protected areas to ensure the reefs are not disturbed by human activity, especially fishing.

Fisheries and Oceans Minister Gail Shea said in a statement the proposed marine-protected-area regulations are a major step towards ensuring the preservation of the reefs, which cover about 1,000 square kilometres. A 30-day public comment period concludes July 26.

Jeff MacDonald, DFO’s oceans and fisheries policy director general, said in an interview that the government is formally proposing under the Oceans Act to protect the glass sponge reefs, which have been determined as unique in Canada’s oceans.

He said DFO proposes a core protection zone from all human activity. It would cover the seabed, as well as soil and water around the reefs, and up to 40 metres of water above the reefs.

“We’re covering a huge area of the ocean around the reefs where there will be no human activity whatsoever,” MacDonald said. “There is very little human activity in that area because of its remoteness and distance from shore.”

He said the Hecate Strait reefs are located more than 160 kilometres from shore. The regulations would permit some hook-and-line fishing operations and surface traffic in areas known as adaptive zones, but the final decision allowing activity rests with DFO and other managers of the area, which includes First Nations and stakeholders.

The Canadian Parks and Wilderness Society, a charitable organization that works to protect Canada’s natural areas, is concerned the proposed changes are not enough to save the delicate reefs.

Society director Sabine Jessen said her organization has worked for more than 15 years to protect the reefs and allowing fishing activities near them threatens their existence.

She said some of the reefs are as tall as eight-storey buildings but they can crumble if disturbed and fishing activities stir sea floor sediment that chokes the sponges.

“We’ve had concerns right from the beginning that the reefs are vulnerable to anything that touches them because they have the consistency of meringue,” said Jessen. “If something touches them it smashes them to bits.”

Jessen said the proposed marine-protected-area regulations will still allow fishing while scientists study the potential harms that could result.