Can I see your passport, Mr. President?

At their 'conversation' in Toronto, both Clinton and Bush get tripped up on new U.S. travel requirements 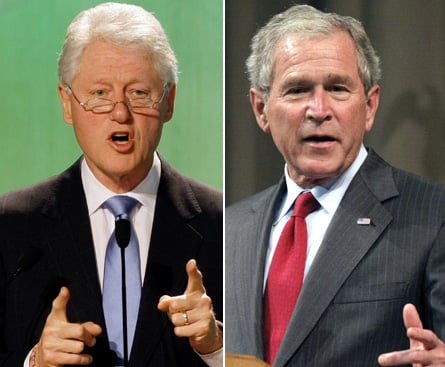 C’mon. Did we really expect one of them to say something unkind?

About 5,000 people paid between $100 and $200 for a ticket to “A conversation with Presidents George W. Bush and Bill Clinton,” today at the Metro Toronto Convention Centre, and every single one of them came hoping for at least a little jousting on foreign policy, or taxes, or even just a taste of old-fashioned partisan ribbing. But no. The only jokes were self-deprecating. The only disagreements were measured and respectful. “I have a different take on that” was about as pointed as it got.

To be fair, Clinton undercut the confrontational atmosphere right off the top. “You imagine this is a 21st century version of the Roman Coliseum. You expect us to attempt to devour each other. Frank McKenna (the moderator) will attempt to meet your expectations. We’ll do our best to thwart them,” he said.

In other words, it was like watching former major league ballplayers get together for a charity softball game. Except, in this case, the proceeds were mostly going to the guys on stage, who both pocketed stipends well into six figures to sit around in comfy chairs and shoot the breeze about what it’s like to be the most powerful person on earth.

That is not to say, however, that it was all blarney. There was even some news. Depressing news at that. As most every Canadian knows, starting this week, and for the first time in our history, crossing the Canada/U.S. border requires a valid passport. This is a major policy change that is sure to have huge implications for tourism, and the economy. But neither George W. Bush (on whose watch the passport policy was set in motion) nor Bill Clinton (who professes, like G.W., to be a real Canada-lover) had any earthly idea that this was happening. No idea whatsoever.

When McKenna put the question to him, Bush said he thought the two countries were developing an “easy pass” identification card that would make the border even more convenient and efficient. He looked out into the audience, searching in vain for U.S. Ambassador David Wilkins. “Wilkins? What happened to the easy pass?” he said. “I hate to plead ignorance, but I guess I am.”

Clinton was equally flummoxed, but promised to go home to Washington and ask about “what can be done.” “It’s bad for the relationship but it’s also bad for your economy especially,” he said. No guff, Mr. President.

That’s right folks. All those news stories about “high-level lobbying” and desperate efforts by the border governors to roll back the demand for passports? None of it ever got as far as the Oval Office. “I didn’t know about it and neither do most Americans I think,” Clinton said.

Truth is, the prezes have bigger fish to fry than our border worries. Even retired presidents do. Clinton used his opening remarks to talk about the various good works he has dedicated his post-presidency to: climate change, HIV/AIDS, childhood obesity. One of Clinton’s great skills is his ability to tell you about all the great things he’s doing, and not come off like a self-aggrandizing bore. Even at 62, he still gets audiences eating out of the palm of his hand. At the sound of his soothing drawl, women in the audience would have gladly thrown donations to his charitable foundation onto the stage, wrapped in their undergarments.

Bush’s charm is very different, but still formidable. He made a couple of jokes about being retired, about the fact that he’s glad to be out of the spotlight, and about his lousy approval ratings. “I went to a store to buy batteries and an old fella came up to me and said ‘does anybody ever tell you that you look like George W. Bush?’ ‘I get that all the time,’ I said. ‘Well it must really make you mad.’” Har har har. Bush is working on a book, to be released in November 2010, “so I can stake my claim about my eight years in the presidency, and so people can understand some of the decisions I made.”

They are both at very different stages in the same project: legacy building. And events like this make it a very profitable project indeed.

Now they can afford to be more candid, if not completely forthcoming. Clinton threw himself at the mercy of the world’s judgement (again) over his failure to act in Rwanda. “I have no defense.”

Bush said his hands were tied on Darfur. “Once you take the option (of using military force) off the table, you’re left with diplomacy,” he explained. “But diplomacy only works if you have leverage.” He went on to make what was probably his most insightful comment of the day: “The UN is a very important institution, but it’s not built for problem solving.” And so, with the military over-extended in Iraq and Afghanistan, and China hostile to any attempt to rein in the regime in Khartoum, the U.S. was left to shuttle food aid, and ask politely for the killing to stop. Lest you think that’s a lousy excuse, W’s pal Bill hopped in: “I think he did about all he could do there.”

They differ on gay rights. They differ on Cuba. But always politely. Incredibly, Guantanamo never came up. Neither did the economy. And at the end, everybody got a standing ovation, and the two gracious guests reaffirmed how much they love this darn country of ours. Best pal a country like the U.S. could hope for. Too bad it’s going to be so much harder to get back and forth between our two great nations. Wish we’d known about that sooner. Oh well.