Can the courts legislate action on climate change?

Canadian youth have filed a lawsuit against the government for violating their rights to security and equality. It is one of nearly 1,400 climate lawsuits worldwide. 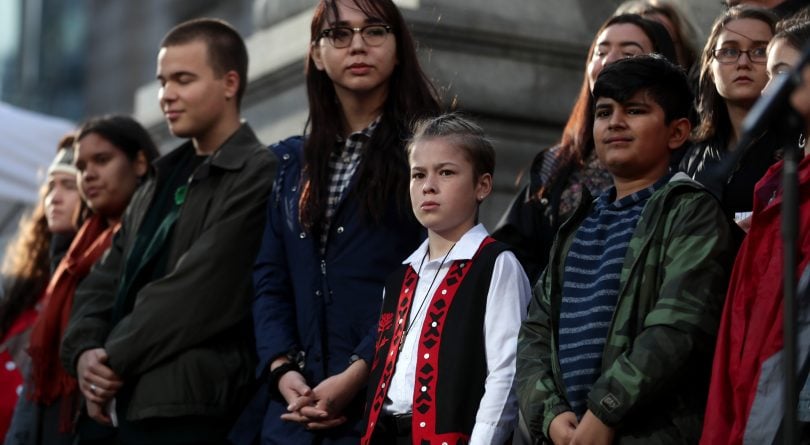 Some of the 15 young people who are parties to a lawsuit filed against the federal government for contributing to high levels of greenhouse gas emissions and dangerous climate change are seen at a press conference, in Vancouver, Friday, Oct. 25, 2019. THE CANADIAN PRESS/Darryl Dyck

Fifteen young Canadians from across the country have filed a lawsuit against the federal government for discrimination and for contributing to dangerous climate change. La Rose v. Her Majesty the Queen was filed on Friday, October 25, in federal court in Vancouver. On the same day, some of these youths suing the government stood beside teen climate activist Greta Thunberg  to tell thousands at a Vancouver climate rally how they were being impacted by climate change.

“Youth are frustrated by the government’s failure to put a science-based climate action plan in place,” says Cecilia La Rose, 15, of Toronto, one of the plaintiffs. La Rose says climate change is affecting her health by making her allergies worse and impacts how she lives both day-to-day and into the future. “Young people are being affected by climate change and we want to hold governments accountable,” she says. When it’s suggested to her that this case could take years to decide, La Rose replies: “I’m in this for the long haul.”

As climate science is increasingly able to link the likelihood of individual extreme weather events to carbon emissions, it has spawned hundreds of climate lawsuits. According to the Sabin Center for Climate Change Law at the Columbia Law School, there are no fewer than 1, 390 climate lawsuits against governments and fossil fuel corporations in more than 25 countries. The La Rose lawsuit is just one of several filed against various governments.

Last July, the Quebec Superior Court heard a similar case from youth regarding the federal government’s failure to sufficiently regulate greenhouse gas emissions. While the court ruled against youth on a technical issue, it confirmed that the courts should be able to adjudicate the issue of an alleged failure of governments to act on climate change as a violation of the Canadian Charter, says David Estrin, co-founding director of Environmental Justice and Sustainability Clinical Program at Osgoode Hall Law School.

“The science is now clear about the harm from climate change,” says Estrin. Governments have a duty to protect its citizens and while they’ve set emission reduction targets to reduce that harm, they’ve failed to meet them, he says. “Courts could step in to protect the public.”

The Quebec court decision affirmed its right to impose a remedy on governments in such cases. Such a remedy might require a specific emissions-reduction target and a plan to achieve it, and this would be legally enforceable, unlike other reduction commitments governments have made and ignored over the last 30 years, says Estrin.

There’s precedent for courts’ successful intervention on climate policy. In 2015, a citizens group in the Netherlands called Urgenda won its climate case against the Dutch government for failing to make larger reductions in its greenhouse gas emissions. The Dutch government launched several appeals, including arguing that the Netherlands’ emissions are “too small to matter” since they are less than 0.5 per cent of global emissions. (Canada’s are just under two per cent. ) The Dutch court pointed out that the government couldn’t prove its emissions reductions would not have an impact. The case is now before the Dutch Supreme Court, which is expected to give its final decision in December. The lower court’s decision in favour of Urgenda is expected to be upheld, says Estrin.

Canada’s La Rose v. Her Majesty the Queen is backed by the U.S. non-profit Our Children’s Trust, which in 2015 also supported Juliana v. United States. The American suit asserts 21 young people’s rights to life and liberty have been violated by the U.S. government for allowing greenhouse gas emissions to grow virtually unchecked. The Trump administration has fought to dismiss the case but have only succeeded in delaying it.

In another case, 16 youth filed a lawsuit in Alaska arguing their state has a constitutional responsibility to protect the climate as a public resource for future generations. They also want a state law promoting fossil-fuel development overturned. The Alaskan Supreme Court is considering whether the case will go to trial.

Governments are also filing climate lawsuits, the most notable being the People of the State of New York v. Exxon Mobil Corp, which alleges Exxon has misrepresented the risks its Alberta oilsands operations face as governments move to fight climate change, misleading investors about the financial impacts—amounting to $30 billion—from climate change regulations.

Like “Big Tobacco,” the biggest fossil fuel producers have long known their products cause climate change, says Dianne Saxe, one of Canada’s leading environmental lawyers and the former Environmental Commissioner of Ontario, but have actively lobbied governments to prevent restrictions and have misled the public. In what may set a precedent for the fossil fuel industry, the Quebec Court of Appeal ordered tobacco companies to pay $15 billion in compensation and punitive damages this year. Within two weeks, Japan Tobacco Inc.’s Canadian unit was granted creditor protection; analysts had warned that if Big Tobacco lost the Quebec cases, it could bankrupt the industry in Canada.

The cost of damages from climate impacts for Canadian municipalities, companies and individuals are already in the billions of dollars, says Saxe, and the number of climate lawsuits is going to explode. And it’s not just fossil fuel companies that could be liable; insurance companies, banks and other financial institutions that invest in the industry may also be on the hook, she says. This year, Canada’s Office of the Superintendent of Financial Institutions (OSFI), regulator of 400 financial institutions and 1,200 pension plans, warned insurers about the risk of being sued for climate damages.

While most environmental lawsuits are lost, the disclosure of evidence including documents can be very important in shaping public opinion and bringing pressure on governments to act, says Saxe. Catherine Abreu, executive director of the Climate Action Network Canada, an umbrella group with dozens of environmental organizations as members, agrees. The La Rose case could be a “total game changer because it pushes past political and partisan game playing on climate,” she says. Even if the lawsuit is dismissed, there will be opportunities to show how climate change threatens the health and well-being of youth. And that will bolster the youth climate movement, says Abreu. “It’s powerful no matter how the case plays out.”