Prime Minister Justin Trudeau gave a speech at the Canada Day celebrations, but neglected to mention Alberta when he recited a list of the country's provinces 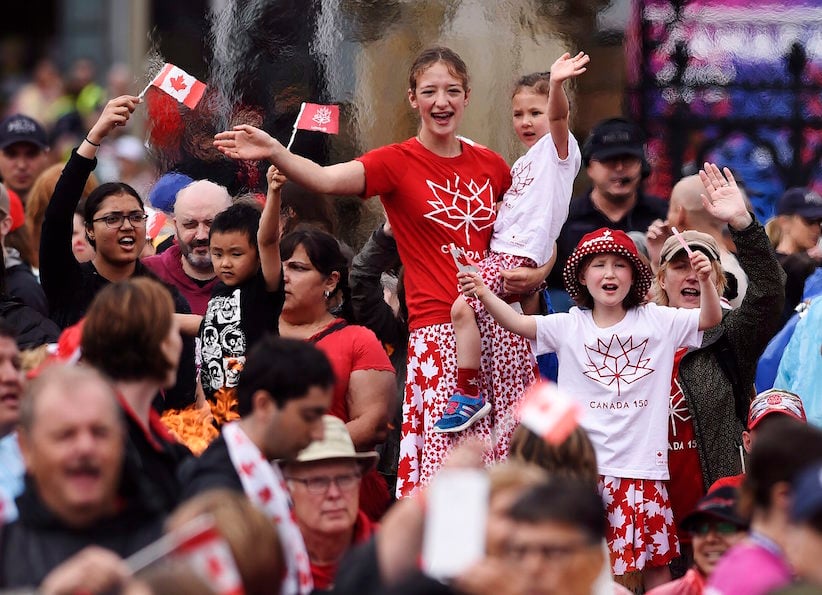 People take in the Canada 150 celebrations on Parliament Hill in Ottawa on Saturday, July 1, 2017. THE CANADIAN PRESS/ Justin Tang

By midday, however, the rains had relented as Prime Minister Justin Trudeau, his wife Sophie Gregoire Trudeau and their children arrived, along with Prince Charles and the Duchess of Cornwall, to take in the day’s performances, including a rousing version of “Carry On” by Buffy Sainte-Marie.

A CF-18 streaked over the Centre Block, drowning out the final notes of O Canada, before Heritage Minister Melanie Joly kicked off the proceedings in earnest: “Welcome to Canada Day,” she enthused.

Rain clouds weren’t the only damper on the day, however.

Canada 150 celebrations have been tinged with the resentment and frustration of indigenous people who don’t share the festive mood, preferring instead to emphasize the country’s oppressive, colonial past — a sentiment symbolized by the teepee erected not far from the stage.

“Our past is far from perfect,” Trudeau said during a stirring speech about Canada’s history. “For centuries, Indigenous Peoples have been victims of oppression, from the time when the first explorers celebrated their discovery of the new world.”

He urged the crowd to acknowledge the country’s history and confront its reality.

“We must educate ourselves and dedicate our efforts to progress,” he said. “It is a choice we make not because of what we did, or who we were, but because of who we are.”

Trudeau’s speech also included one monumental gaffe: as he recited the names of the provinces, he omitted Alberta — something not lost on co-host Sandra Oh, who noted the mistake after the prime minister left the stage.

Moments later, he jumped on the front of the stage, called out, “I love you, Alberta,” and blew a kiss, before sitting down and shaking his head.

U2 frontman Bono and guitarist the Edge took the stage after Trudeau, acknowledging the country’s reputation for tolerance and consensus-building.

“This is your home, and we are grateful guests in it,” said Bono, whose brief remarks alluded to the protectionist and confrontational policies of U.S. President Donald Trump.

“Where you lead, others follow, and that’s the real reason the Edge and I are here today.”

Spirits were high despite a persistent downpour all morning as a long line of revellers snaked down Wellington Street, the southern edge of the parliamentary precinct, in order to brave a steely security gauntlet in order to get onto the grounds.

“I’ve wanted to come to Parliament Hill since high school,” said Jenna Doerksen, 29, whose family travelled from Winnipeg to mark what her father Don Collinridge described as her favourite holiday.

Doerksen, clad in a red T-shirt and sporting a tiara festooned with flags, described herself as “dressed down” compared with the rest of her family — the airline, she said, lost her luggage, forcing her to cobble together an outfit from borrowed bits and pieces.

Her father spent five hours the night before crafting a hat out of red and white balloons, while wife Lynda, 56, built a crown of flags, including two from the centennial celebrations in 1967, when she was in Grade 1.

To them, like countless others, Canada is home, a place of safety and security.

“We were very happy to see the security here today, searching us.,” said Lynda, 56. “We feel safe.”

Huge crowds of people found themselves waiting in enormous lineups that snaked all through the core of downtown Ottawa to get through security and make their way on to the grounds, made soggy and unsafe by the rains, officials said.

Some at the very back of the line were warned to expect a wait of up to three hours. Street vendors all along the lineup took advantage of the captive market, hawking everything from stickers and flags to Canada Day pins and temporary tattoos.

As crowds gathered at the foot of the stage early in the day, Trudeau sat down for an audience with the prince at Rideau Hall, where the pair commiserated briefly about the conditions outside.

“We’re Canadians,” Trudeau was heard to say over the din of camera shutters. “We can handle a little weather.” The prince was later invested as an Extraordinary Companion of the Order of Canada by Gov. Gen. David Johnston.

Even Trump himself got into the spirit of the occasion, tweeting his congratulations on the occasion of Canada’s birthday and acknowledging the prime minister by name, whom he described as his “newfound friend.”

The teepee, a source of some tension earlier in the week, has turned into an exhibit of sorts as visitors stop by to express their support or chat with the so-called “reoccupiers” of unceded Algonquin territory.

Regina resident Rhoderic Sia, 40, a red, flag-bedecked colander on his head, acknowledged the cause of the activists as they huddled around the teepee.

MORE: A Two-Four of Facts for Canada 150

“Everybody has their own opinion,” said Sia, who hails originally from the Philippines.

“I respect it, but we still have to respect what Canada is now. Coming from another country, being here is all about your freedom. You can have everything if you work hard.”

Said Trudeau in a statement earlier in the day: “As we mark Canada 150, we also recognize that for many, today is not an occasion for celebration; Indigenous Peoples in this country have faced oppression for centuries.”

“As a society, we must acknowledge and apologize for past wrongs, and chart a path forward for the next 150 years — one in which we continue to build our nation-to-nation, Inuit-Crown and government-to-government relationship with the First Nations, Inuit and Metis Nation.”

A couple of blocks from the Hill, the long security lines and a morning drenching of rain didn’t dampen the enthusiasm of many who ventured into Ottawa for the big day, including Luciana Nunno from Ajax, Ont.

“I’m proud to be Canadian, I feel safe in this country,” Nunno said as she and her husband Mike — along with tens of thousands of others — slowly made their way along Queen Street toward one of two security checkpoints on either side of the precinct.

“You know it’s wonderful, all the nationalities, all the cultures,” Nunno said. “The one thing I hope for is really true reconciliation with our aboriginal people.”

Canada 150 celebrations are taking place across the country throughout the day — and even off the shores of Newfoundland and Labrador.

MORE: 150 reasons why it’s better to be Canadian

A boatload of 75 early risers headed out on the North Atlantic to be among the first to welcome Canada Day as dawn broke over the country’s most eastern point. They cheered and danced to music onboard the Iceberg Quest vessel as they celebrated the occasion.

“There’s no sun, but there is plenty of mist and rain and cold, which kind of makes it a pretty extraordinary experience,” said Craig Simons, who moved to St. John’s a year ago from Houston with his wife Jennifer.

“It has been a wonderful experience for us and the kids. It’s nice to see how much Canadians love their country.”

The early-morning tour was especially moving for Gerry Cantwell, who’s descended from five generations of lighthouse keepers at Cape Spear. He called it a day of reflection and gratitude for the men and women who’ve helped protect Canadian rights and freedoms.

“We’re very fortunate to live in a country with the freedoms that we have and, on July 1, to remember the people who gave us our freedom.”

— With files from Terry Pedwell in Ottawa and Sue Bailey in St. John’s