From the editors: A small Ontario town is doing more to mark the 100th anniversary of the end of the First World War than the entire federal government 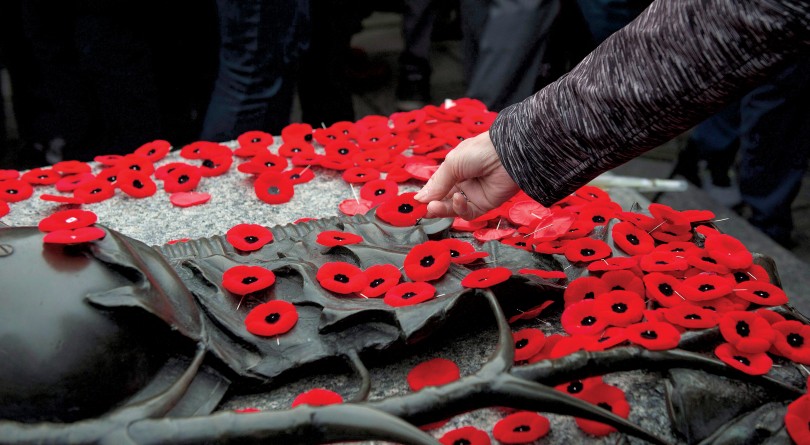 People place poppies on the Tomb of the Unknown Soldier at the National War Memorial following the Remembrance Day ceremony in Ottawa on Nov. 11, 2015. (Justin Tang/CP)

What’s big about tiny Cobourg, Ont.? The ability to properly appreciate and respect Canada’s history, for one thing.

Cobourg, a town of 20,000 on Lake Ontario, is currently putting the rest of the country to shame in recognizing one of the most significant events in our nation’s past. In fact, it’s doing more to mark the 100th anniversary of the end of the First World War than the entire federal government.

“Cobourg has a big link to the war,” says historian Hugh Brewster. His play, Last Day, Last Hour, is the centrepiece of the ambitious Armistice ’18 festival the town is now hosting. It recounts a famous libel suit brought by Canadian general Sir Arthur Currie against a local newspaper critical of his military leadership, and is being performed in the same historic Cobourg courtroom as the 1928 trial. The town is also sponsoring an impressive series of art exhibits, concerts, sold-out speaking engagements, walking tours and other theatrical productions, all commemorating the end of the Great War in 1918. “Nobody else in the country is doing as much as we are,” says Brewster with obvious pride.

RELATED: Why we’re honouring exactly 66,349 Canadians who died in the First World War

Britain and France are also recognizing the centenary in suitably significant ways. In London, for example, a People’s Procession will see 10,000 citizens selected by lottery walk past the Cenotaph in London on Nov. 11, as the rest of the nation is encouraged to ring bells to mark the historic moment. French President Emmanuel Macron is embarking on a week-long tour of First World War battlefields, including a meeting with German Chancellor Angela Merkel at Compiègne and a candlelit vigil at Artois, followed by a peace summit in Paris.

Canada’s official commemoration effort, by comparison, is disappointingly modest. There’s a new exhibit at the Canadian War Museum and a few blandishments from the minister of veterans affairs. The Royal Canadian Legion and the federal government are co-sponsoring a cross-country bell ringing effort similar to the British program, but it’s less grand and woefully under-promoted. Set against the exertions of small centres like Cobourg and Fredericton—which is hosting a nightly bagpipe performance called 100 Laments—the feds are doing little of national significance for this historic occasion. It’s an enormous and embarrassing oversight.

Canada had an outsized impact on the war, just as the war had a huge effect on the country itself. More Canadian soldiers died in the First World War than in all other wars combined. And beyond the better-known battles of Vimy Ridge and Passchendaele, military historian Jack Granatstein points to the Hundred Days campaign at the end of the war as the apex of Canada’s military prowess. “Canadian arms mattered more at that time than in any other war we fought,” he says. Our soldiers’ aggressive push through German lines in the fall of 1918 led directly to the capitulation of the Kaiser’s forces at 11 a.m. on Nov. 11. Without Canada’s contribution, the war would have dragged on.

“I find it astonishing that we will be letting this moment pass with scarcely a mention,” says Granatstein. Cobourg’s commemorative efforts suggest public pride in our country’s military history runs far deeper than our federal government is prepared to let on.

Prime Minister Justin Trudeau’s government has rightly focused attention on darker moments in history, most notably the legacy of residential schools. Our heritage should provoke both regret and deep reflection.

But our past is also blessed with moments of greatness and awe-inspiring national achievement. Let’s talk about those, too. The federal government’s lack of interest in the centenary sadly calls to mind Lt.-Col. John McCrae’s most wrenching line. It is not invoked lightly: We are breaking faith with those who died.