Canada could lead world in resettling refugees by 2020, passing U.S.

The United States once welcomed more refugees than all other countries combined. No longer. 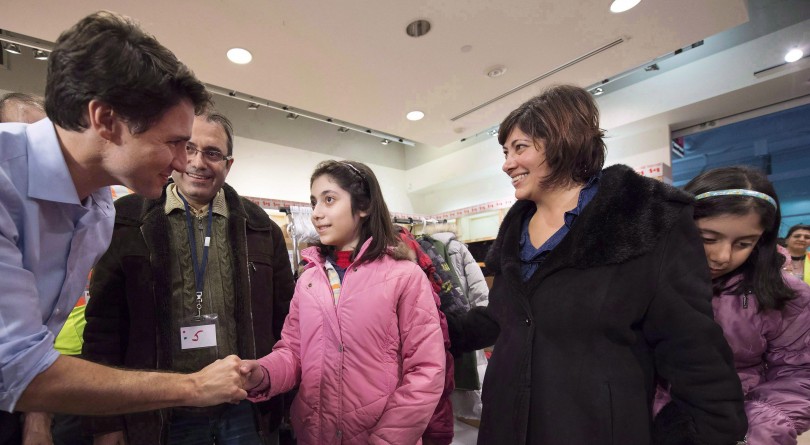 In September 2016, for his final address to the United Nations General Assembly as president of the United States, Barack Obama said America would resettle 110,000 refugees in the coming year. It would represent not only be a substantial increase aimed at addressing the global refugee crisis, but also a “test of our common humanity,” Obama said.

In 2017, America resettled about 33,000 refugees, according to UN data. It was a huge drop from the 97,000 resettled refugees in the United States during Obama’s final year in 2016 or the 66,000 from 2015. For many years, America resettled more refugees than the rest of the world combined (Resettlement refers to refugees moving from asylum to a country that will  accept them permanently). Last year was the first time since 1980 that did not happen, according to a study released last week by the Pew Research Centre. This, even when the global refugee population surged to an all-time high.

America’s decline in resettling refugees is so precipitous that, within a few years, the Land of the Free may no longer be the global leader in that category. That title could soon belong to Canada.

“Historically, the U.S. has been the big hero,” says Jennifer Hyndman, director of the Centre for Refugee Studies at York University. “Canada has always done more, per capita, than the U.S. But in terms of absolute numbers, the U.S. has had much bigger than anyone else.” 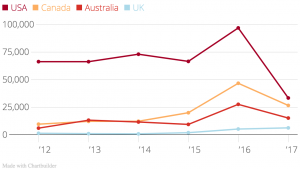 Canada’s growth has been slow and steady. In 2012, the country resettled about 10,000 refugees between both private and government-assisted sponsorship. In the aftermath of the Syrian refugee crisis, Canada had an outlier year by resettling nearly 47,000 refugees in 2016. Last year’s figures—about 27,000 resettled refugees—“is just a return to the new normal,” Hyndman says.

Australia, meanwhile, resettled about 15,000 refugees in 2017, ranking it the third top nation in that category. The United Kingdom had around 6,000. If you take the U.S. and Canada out of the equation as well, all the other countries combined for 26,000 resettled refugees last year, according to Pew’s analysis.

Canada will likely continue to increase its annual tally. The Trudeau government has promised to increase the number of government assisted refugees to 10,000 annually by 2020 (up from its current 7,500 per year). The government equally said that it expects annual private refugee sponsorships to rise up to 20,000 by 2020—a year that might put Canada above America in absolute numbers for the first time, if America continues its downfall.

There was a time, not long ago, when the United States actively sought more refugees. “Refugees at that time were points scored for the capitalist team against communism,” Hyndman says. Now American NGOs that resettle refugees are laying off staff because often their budgets are based on how many only refugee they resettle. “The bottom is falling out of people’s budgets.”

America’s current resettlement numbers haven’t been this low since the immediate aftermath of the 9/11 terrorist attacks in 2001—and Hyndman predicts they will go lower still.

“We might very well pass [America],” says Tom Denton, executive director of sponsorship and administrations at Winnipeg’s Hospitality House Refugee Ministry. “But it says more about the failure of the United States than the initiative of Canada.”

And while Denton says Canadians might think of it as a feather in our cap if that day comes, “from my perspective here, it’s still a huge failure [in Canada] because we have so many refugees people want to sponsor and they can’t. I’ve got a waiting list of 30,000.”

Being number one could also pose other challenges, especially populist sentiments continue to grow in North America—as witnessed most recently with the election victory of Ontario Premier Doug Ford.