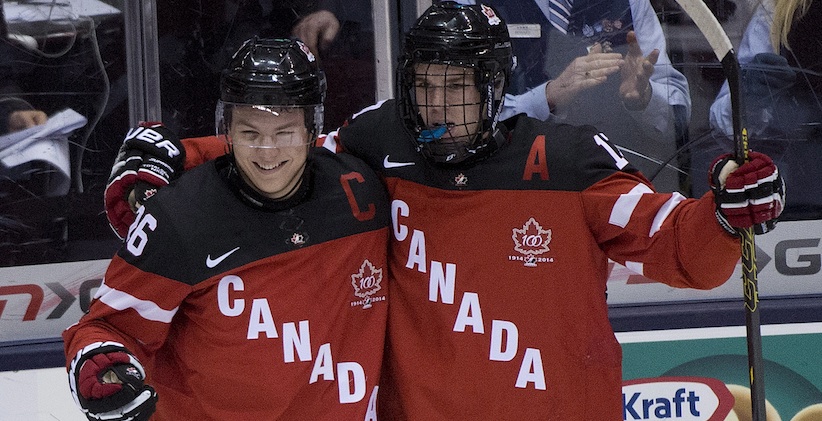 TORONTO — Connor McDavid had a couple of impressive assists and a highlight-reel goal. And that was just one part of Canada’s domination.

Led by McDavid and captain Curtis Lazar, Canada overwhelmed Denmark with offensive firepower in a 8-0 rout Friday night at Air Canada Centre in the quarter-finals of the world junior championship.

Canada owned the play from start to finish, outshooting the overmatched Danes 50-14 to advance to play Slovakia in Sunday’s semifinal. Sweden and Russia meet in the other game.

If this Canadian team clicks as it did against Denmark, it’s possible no team left in the tournament will be any match. Of course, that’s absent a sublime goaltending performance.

Canadian goaltender Zach Fucale was barely tested in making 14 saves to record the shutout. Fucale has allowed a total of one goal at the world juniors.

Canada may have suffered a big loss as winger Robby Fabbri left the game early in the first period with an apparent right leg or knee injury. Fabbri did not return, leaving coach Benoit Groulx’s team with 12 forwards.

Under IIHF rules, Canada would not be able to replace Fabbri or any other injured player for the remainder of the tournament.

Playing in front of a packed house at Air Canada Centre, a departure from tepid crowds at Bell Centre in Montreal, Canada controlled this game from the first shift. The top line of Max Domi, Reinhart and Anthony Duclair hemmed Denmark in its end and offered a preview of the rest of the night.

Minutes later, Sorensen robbed Duclair with the toe of his right pad and stopped Reinhart not long after. It took until the 10:37 mark for Canada to break through.

That happened when McDavid skated around the net and managed to keep his head up as he started to fall to the ice. Mid-slide, McDavid found Lazar in front, and the 19-year-old Ottawa Senators forward beat Sorensen short side.

The top line joined in at 15:17 when Duclair circled the net and fed Reinhart for his fourth goal of the tournament.

Canada padded its lead in the second period. Crouse beat Danish defenceman Mads Larsen and then snapped a shot past Sorensen at 7:50 to make it 3-0.

McDavid’s goal to put Canada up 4-0 was also the highlight of the night. The 17-year-old who’s expected to be the top pick in June’s NHL draft stopped at the edge of the crease, deked until Sorensen went down and then tapped the puck past him at 10:21 of the second.

Exactly three minutes later, defenceman Joe Hicketts sprung Lazar on a breakaway, and the captain had little trouble finishing to make it 5-0. The result would have been even more lopsided had Canada then cashed in on a full two minutes of a five-on-three power play.

At 3:08 of the third, Paul skated in and roofed a back-hander over Sorensen for Canada’s sixth goal.

Then McDavid showed off again by dangling and poking the puck right by Victor Eskerod. That started a tic-tac-toe passing play to Lazar and Point for goal No. 7.

Ritchie added the exclamation point on the power play with 54.8 seconds left.