The government said a bill introduced Thursday in the U.S. Senate falls short of what would be required to avoid tariffs on American products 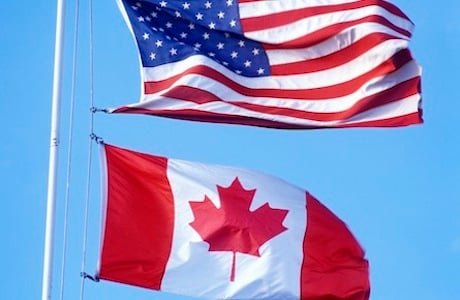 USA and Canadian Flags at the Canadian American border.

WASHINGTON – The Canadian government isn’t satisfied by the latest step taken by U.S. lawmakers to avoid a continental trade war.

The government said a bill introduced Thursday in the U.S. Senate falls short of what would be required to avoid tariffs on American products.

Canada and Mexico are poised to impose such tariffs following a string of victories at the World Trade Organization, with Canada specifically seeking WTO permission to impose duties of $3 billion on a range of American goods including wine and frozen orange juice.

The dispute revolves around a requirement that meat sold in the U.S. to be labelled by country of origin which the WTO recently declared invalid, opening the door to penalties.

The threat of retaliation has already prompted one-half of U.S. Congress, the House of Representatives, to pass a bill repealing the labelling rule. A bill introduced Thursday in the other chamber, the Senate, doesn’t go quite that far; it proposes a voluntary system where producers could choose to label meat by where it was born, raised and slaughtered.

The Canadian government says that’s still discriminatory and wouldn’t deter it from seeking to impose tariffs.

“(This) will harm farmers, ranchers, packers, retailers and consumers on both sides of the border,” the Canadian government said in a statement.

“The U.S. Senate must follow the lead of the House of Representatives and put forward legislation that repeals (country of origin labelling) once and for all.”

“The only acceptable outcome remains for the United States to repeal … or face $3 billion in annual retaliation.”

The bill will now be debated in the Senate, where it could undergo some amendments. It must be approved by both chambers to become law.

Meanwhile, the request to impose tariffs remains before the WTO and Canada says the penalties could be imposed within months.

The meat-labelling dispute pitted proponents of labelling, who said consumers deserve to know where their meat comes from, against opponents including big players in the livestock industry who railed against it as a protectionist measure did nothing to enhance food inspection while simply making it more difficult to import and sort imported meats.

Thursday’s Senate bill was described as a compromise by its supporters, who stem from both U.S. political parties. Its sponsors included John Hoeven, a North Dakota Republican who has been a staunch Canadian government ally on the Keystone XL file, and Michigan Democrat Debbie Stabenow.

“This bipartisan, WTO-consistent legislation, will avoid retaliation while supporting our farmers, ranchers and consumers,” Stabenow said in a statement.

“If consumers in Canada have the right to know where their food comes from through a voluntary labelling process, then American consumers should have the same.”

In condemning the legislation, the Canadian government referred to Stabenow’s role but not that of her Republican co-sponsor, Hoeven.

The bill was also denounced by some players in the cattle industry, and by members of the other chamber, the House, who supported an all-out repeal of country-of-origin labelling which they call costly and pointless.