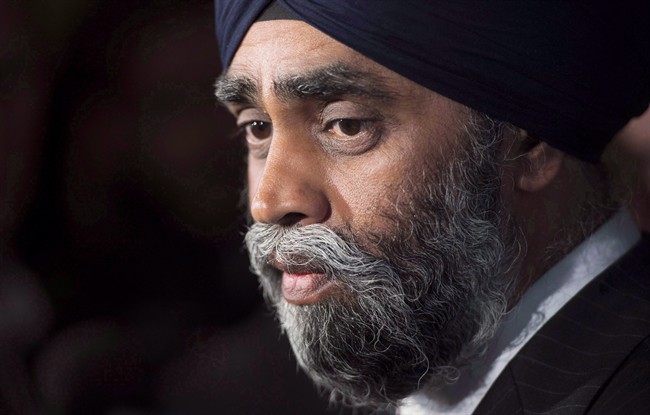 Minister Harjit Sajjan speaks with the media after delivering a speech to the Conference of Defence Associations Institute in Ottawa, Wednesday May 3, 2017. THE CANADIAN PRESS/Adrian Wyld

OTTAWA – Canada is in talks with the United Nations about donating money to a special trust fund set up for victims of sexual abuse by peacekeepers, a senior UN official revealed on Wednesday.

Atul Khare, the under-secretary-general for peacekeeping field support, wouldn’t say how much Canada is looking to provide for the Trust Fund in Support of Victims of Sexual Exploitation and Abuse.

He described it as a “very major contribution” that would be spread out over two years and help provide support and services to those who have been abused.

Khare revealed the talks during a news conference at UN headquarters in New York with Defence Minister Harjit Sajjan and Jean-Pierre Lacroix, under-secretary-general for peacekeeping operations,.

The three were commemorating the International Day of the UN Peacekeeper, which is held every year in honour of the more than 3,500 blue helmets who have been killed since 1948.

The news that Canada could contribute to the trust fund comes as the UN struggles with revelations that peacekeepers either abused or exploited the very people they were to protect in a number of countries.

Even some Canadians have been implicated; UN figures show that three Canadian police officers deployed to Haiti have been accused of sexual abuse or exploitation since 2015.

The most recent was this last March, which the UN is currently investigating, while one of the others from 2015 was sent home for what the UN termed “administrative action.”

The third incident is also from 2015 and still under investigation.

The UN does not publicly identify alleged perpetrators.

Sajjan emphasized the need to reform and modernize peacekeeping during his news conference with Khare and Lacroix, as well as during an earlier speech to the International Peacekeeping Institute (IPI).

That includes increasing the role of women when it comes to planning and implementing peacekeeping operations, a message that Liberal ministers have also made at NATO.

“We in Canada feel strongly about the integration of women at all levels and in all roles in the promotion of peace and security,” Sajjan said in prepared remarks to the IPI.

“We know that local conflicts and crises often affect women and girls differently and more severely than they affect other demographic groups.”

But Sajjan did not specifically address the issue of sexual abuse or exploitation by peacekeepers, or whether Canada would become the sixth country to contribute to the special trust fund.

The fund currently has only about $436,000, according to the UN, with contributions from Bhutan, Cyprus, India, Japan and Norway.

The money is not given directly to the victims, a UN spokesman said, but goes to pay for services and support such as community outreach and education.

Sajjan’s visit to the UN on Wednesday was largely intended to set the stage for Canada hosting a major peacekeeping summit in Vancouver in November.

It was also expected to produce some awkward questions over the Liberal government’s failure, at least to this point, to make good on its promise to provide up to 600 Canadian troops for peacekeeping.

But both Khare and Lacroix kept any misgivings well hidden, as both thanked Canada for its commitment to peacekeeping, while Sajjan showed no sign the government was rethinking its earlier promise of troops.

Canadians “recognize the role peace operations play in protecting our collective security. They want Canada to engage in missions that have a meaningful impact in the lives of people most in need,” he said.

“For this reason, we pledged to increase our engagement in peacekeeping and are finalizing how we can best do that.”

For his part, Lacroix said Canada has “a lot to bring” to peacekeeping, “and we look forward to that.”