From rhinos to rock shows and dinosaurs to dining, a stir-crazy nation turns to its cars to get out and experience something close to normal 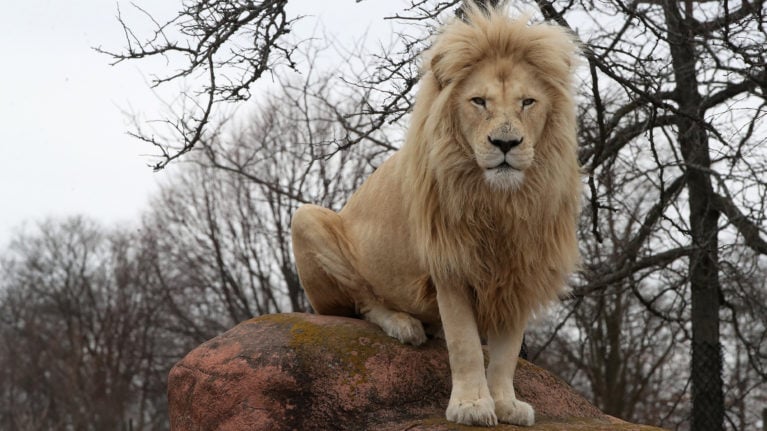 The lion Fintan looks out from his enclosure at the Toronto Zoo during the COVID-19 shutdown, on March 18, 2020 (Steve Russell/Toronto Star/Getty Images)

Imagine spotting a lion during a safari adventure in the African savannah. Close your eyes and soak in the sunshine for a moment. Breathe in the warm, dusty air.

Maybe someday international travel will be an option again. But in the meantime, with the sun beating down on your car and the air smelling like… your car, spotting a lion is an option. Or a rhino. Or a monkey.

The Toronto Zoo is selling online tickets to a “scenic safari” that lets vehicles wind single-file past a variety of its exhibits. “Quarantine’s been tough on everyone, particularly families,” zoo CEO Dolf DeJong says. “It’s tough to be cooped up for a long time. And we think having these opportunities is going to be key to a well-measured recovery.”

DeJong is, of course, talking about our society’s collective recovery from a pandemic that has transformed our day-to-day lives and made many recreational activities all but impossible. (The animals, while remaining cooped up, are being monitored, he says, to make sure the car lineup isn’t stressing them out.)

In this stir-crazy nation, a day at the zoo is not the only thing you can now accomplish by automobile, for those who have access to one.

Families have found creative ways to celebrate kids’ birthdays—like one for Jaxson, a five-year-old in Winnipeg, that attracted dozens of vehicles for drive-by celebrating.

The art world is mobilized. In Toronto, a Van Gogh-themed musical light show in a former newspaper printing plant will be accessible by car for part of June.

For that matter the dinosaur world is mobilized: daily drives past a giant T-rex model, among others, have recently been scheduled to raise funds for the Indian River Reptile Zoo near Peterborough, Ont. (A cruise through Drumheller, Alta., still offers dinosaur views year-round.)

Drive-through confessions were already taking place at Catholic parishes across the country; now, drive-in religious services are green-lit in Ontario. And drive-in movie theatres are in for a major comeback.

In Prince George, B.C., local band Studio 720 is preparing for Canada’s first drive-in rock concert on the roof of the city’s CN Centre arena. Expected for May 23, it was moved there from the roof of a Canadian Tire due to popular demand.

“I hope this brings some sort of life back to the entertainment industry and the music industry, and that people will start to think outside the box,” vocalist J.P. Muldoe told Maclean’s in the lead-up to the event. It has since been postponed because of new gathering guidelines from the provincial government. According to the band, a new date hasn’t yet been set.

The idea is a massive undertaking birthed by local politician Kyle Samson, with optional donations from concert-goers going to Wheelin’ Warriors of the North, a cancer charity. If and when the show goes on, there will be a full stage set-up on the roof. Lights. Smoke. Facebook and Instagram live streams. “All the goodies,” Muldoe said, “as well as FM transmission, so transmitting the entire show over the radio into your car.”

Band members, who plan to be spaced apart on the stage, have managed to practice a bit even though social distancing guidelines have made it challenging. They’re hoping to include a cover of Nazareth’s à propos “Turn on your receiver” in the set.

Meanwhile, a struggling restaurant industry has largely pivoted to takeout but that hasn’t stopped some vendors from trying new things. In Vancouver, though the Pacific National Exhibition won’t host its annual fair this year, the nostalgic can hit the PNE and drive past four mini donut stalls. Mini donuts will not fix everything. But let’s be honest: mini donuts might fix something.

And in Ottawa, five-course meals from Atelier, routinely listed as one of the country’s best restaurants, are now available via drive-through on the weekends.

Diners drive by to pick up the first course, served with a non-alcoholic drink pairing, then eat it in their car before returning for the next. At the end of the meal, chef Marc Lepine puts a printed-out menu on their dashboards. It looks like a parking ticket.

“People seem to really enjoy it,” Lepine says of their first shot at the experiment last weekend. “Out their car windows, they were saying, ‘this is such a great idea!’ They wanted to know when the menu would change so they could come back.”

He is delighted but bewildered by that. “A few months ago, if we had asked people if they could eat in their cars?” he laughs. “That wouldn’t have gone over very well.”