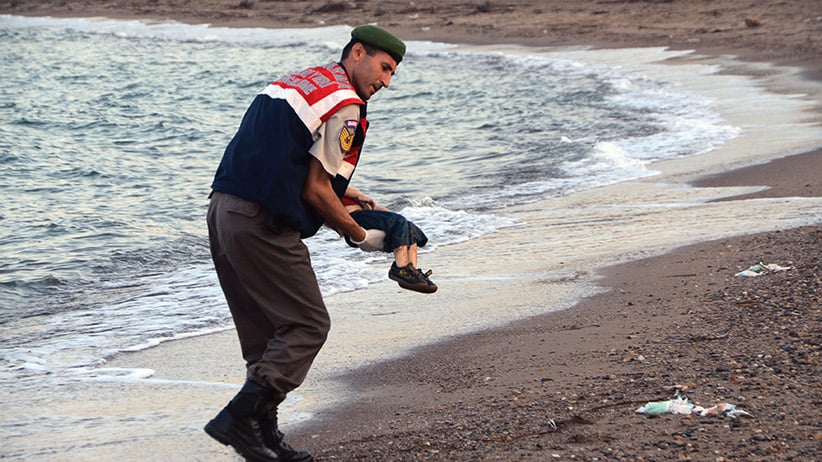 A paramilitary police officer carries the lifeless body of a migrant child after a number of migrants died and a smaller number were reported missing after boats carrying them to the Greek island of Kos capsized, near the Turkish resort of Bodrum early Wednesday, Sept. 2, 2015. AP/DHA/CP

Update, 3:30 p.m. ET, Sept. 3:
Citizenship and Immigration Canada says it received no refugee application from the father of two drowned Syrian boys who have put a devastating human face to the Syrian refugee crisis.

OTTAWA — A refugee advocacy group says two young boys who drowned off the coast of Turkey could be alive today if Canada had responded better to the Syrian refugee crisis.

Alan Kurdi, 3, and his brother Galib, 5, died with their mother while fleeing to Europe after their application to resettle in Canada was denied.

The Canadian Council for Refugees is calling for Syrians with family in Canada to be allowed entry immediately to complete processing in safety.

The council wants flexible measures — such as temporary resident permits —for Syrians with relatives in Canada.

It notes the boys had an aunt in Canada and likely would have been able to get a Turkish exit permit if they were leaving to reunite with family.

The Canadian Association of Refugee Lawyers accused the Conservative government of turning its back on desperate people. “This Syrian refugee crisis is one of the worst humanitarian tragedies of the past century and this government has utterly failed to respond in any meaningful way.”

The Conservatives have said their approach balances humanitarian assistance with a military effort against radicals rampaging through Syria.

In January, the government promised 10,000 Syrian refugees a home in Canada over the next three years.

They say that, as of late July, 1,002 people had resettled in Canada as part of that commitment. That’s in addition to 1,300 Syrians settled under a pledge made in 2013.

The council for refugees urges an immediate commitment to a minimum of 10,000 government-assisted resettlement places for Syrians, in addition to Canada’s regular resettlement numbers.

Current Canadian promises to take in Syrian refugees are made within existing commitments, so the numbers simply displace other refugees, the council said.

In past refugee crises Canada responded quickly and decisively, the council said Thursday. “In 1999 Canada took extraordinary measures to evacuate thousands of Kosovar refugees. The same level of commitment is needed now.”

The council also wants elimination of barriers to the private sponsorship of refugees, including restoration of full interim federal health coverage and lifting of document requirements for groups who offer to sponsor refugees.

“These small boys could be alive today, if Canada had responded more appropriately to the Syrian refugee crisis,” said Loly Rico, the council’s president.

“We shouldn’t need to wait for a tragedy like this to realize we must open our doors. We don’t want to see any more children die in this way.”