Canada plans push against tax evasion at home and abroad 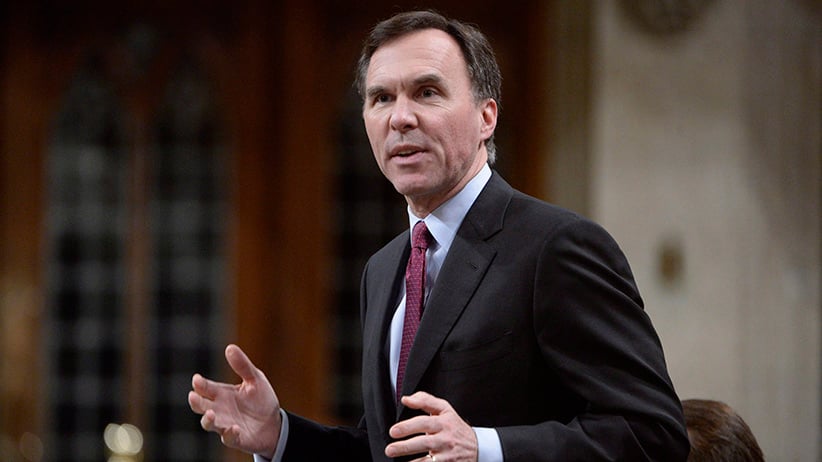 Finance Minister Bill Morneau answers a question during Question Period in the House of Commons on Parliament Hill in Ottawa, on Tuesday, Feb.23, 2016. (Adrian Wyld/CP)

WASHINGTON – The Canadian government promises a multi-front fight against tax evasion amid widespread frustration following the leak of offshore account details in the so-called Panama Papers.

Finance Minister Bill Morneau promised Thursday to make it an issue at home and abroad — first at this week’s international summit in Washington, and later with his provincial counterparts.

A massive data leak illustrating rampant use of multibillion-dollar offshore accounts has become a hot topic at the annual global financial conferences, the populist anger spilling into these high-powered meetings.

“We’re going to be a really strong voice around doing this,” Morneau said. “I’m also going to go back to Canada and talk about what we can do, above and beyond what we’ve already committed.”

Morneau said he’d push countries at the meetings to sign on to bank-reporting standards being promoted by international organizations — which most key countries have adopted but not Panama.

He also said he’ll raise the issue with the provinces. Transparency advocates say it’s easy for tax cheats to create companies within Canada without ever proving their identity — a problem they say is worse with provincially registered companies.

The provinces will be ready for that discussion, Morneau said: “We need to put it on the agenda, to try and address any gaps, if there are any gaps… But to the extent that we don’t know who owns something — we should.”

A prominent tax transparency group welcomed recent government moves, but said lots more can be done. The federal government has just increased the budget for tax inspectors at the Canada Revenue Agency.

Canadians for Tax Fairness estimates that overseas tax-avoidance schemes — be they legal, illegal or somewhere in between — cost the federal and provincial treasuries $8 billion per year.

In Canada, he said, that means doing a better job verifying the identity of company founders. He said there’s very little scrutiny in that regard and it’s worse with companies registered provincially.

“Canada lags behind all other developed countries,” said Howlett, whose group is supported by unions and financial experts. “They don’t bother to really check who the ultimate owner is.”

The government also faces pressure on different fronts, from its opposition:

— The Bloc Quebecois has introduced a bill that would change a 1980 arrangement with Barbados — a major Canadian tax haven. The agreement allows companies with assets in both jurisdictions to be taxed in only one. Companies can use it to pay taxes that max out at a rate of 2.5 per cent.

— MPs also intend to quiz the revenue minister at a committee hearing. They want to ask about a reported amnesty deal cut with clients of accounting giant KPMG. The CBC reported that the deal allows them to avoid prosecution for a scheme that involved shifting money to the Isle of Man, so long as they settle their tax bill.

Howlett raised these issues as cause for concern. But he welcomed the government’s announcement that it’s shifting its focus from small-time tax cheats, to bigger cases.

He said the Canada Revenue Agency didn’t have the budget to investigate complex international cases — but it’s now received $444 million from the government, in a plan expected to recoup $2.6 billion.

The issue has landed on the agenda of the annual financial meetings in Washington of the G20, IMF and World Bank.

It even came up in a forum Morneau participated in on a completely different topic — mental health.

The World Health Organization presented a study that suggested mental-health issues cost the global economy more than $1 trillion a year in treatment costs and lost productivity — with 12 billion lost work days in the 36 biggest countries alone.

Participants in a high-level panel pushed for increased funding for mental health treatment, which they said would pay off for society multiple times over.

In her closing remarks, the WHO’s director-general took a shot at tax cheats. That drew the loudest applause of the event.

“Governments must invest in their own people… That’s why I ask the question: where has all the money gone?” Margaret Chan said, before suggesting where governments might want to look: “Panama Papers is quite helpful.”

Morneau was asked by reporters whether he or his wife had an offshore bank account, given their sizable family wealth and his pre-political business career.

The minister replied: “No.”