A work stoppage might begin as early as Friday 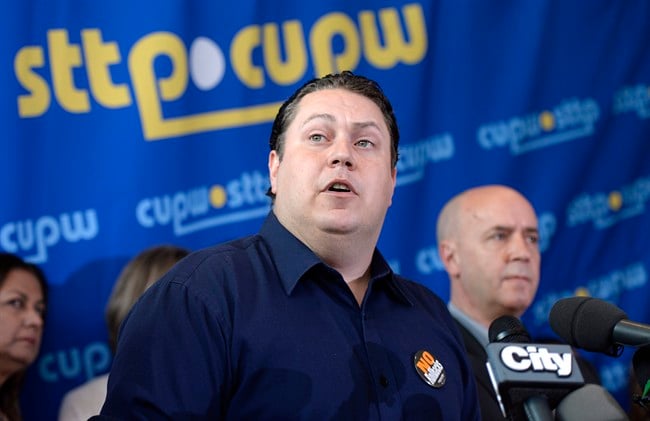 National President of the Canadian Union of Postal Workers Mike Palecek speaks to reporters to discuss the ongoing labour dispute with Canada Post on Tuesday, July 5, 2016 in Ottawa. (Justin Tang/CP)

OTTAWA – The federal government will stay out of a looming work stoppage at Canada Post for now, putting the onus on the corporation and its largest union to come to an agreement quickly before the mail stops being delivered.

Prime Minister Justin Trudeau said Tuesday that his government is not considering back-to-work legislation right away, a change from the former Conservative government’s decision to follow that path in the immediate aftermath of a lockout in 2011.

Trudeau did leave the door open to government involvement if there is a prolonged work stoppage at Canada Post, saying the Liberals didn’t feel it was the “immediate responsibility” of governments “to be heavy-handed” in labour disputes.

“We are a government that believes in good faith negotiations that happen at the bargaining table. That is where these discussions need to be worked out,” Trudeau said in Montreal.

The federal NDP called the Liberal position in the labour dispute disappointing, saying the government was following the same path the Conservatives took in 2011. The party’s labour critics said the Liberals have broken election promises to “end the Conservative-style attempts to discredit and disrupt our postal service.”

A halt in postal services could come as early as Friday if Canada Post and the Canadian Union of Postal Works cannot work out a new collective bargaining agreement for the approximately 50,000 rural and urban mail carriers in the country.

In a statement early Tuesday, Canada Post said it plans to suspend the collective agreement as of Friday. It blamed prolonged negotiations, the union’s strike mandate and the financial cost of a rapid decline in mail volume.

Canada Post said the 72-hour notice delivered to the union does not necessarily mean it will shut down on Friday.

Rather, it said, the announcement would allow the Crown corporation to “take measures that are necessary to respond to the changing business reality.”

For the union, that means its workers are being threatened with a lockout, as CUPW has vowed to not go on strike and stay at the bargaining table.

Canada Post said its latest offer presented on June 25 was fair and reasonable and that it still hoped to negotiate a deal with the union.

The union wants to see a pay increase for its rural, mostly female carriers, who earn 28 per cent less than their urban, mostly male, counterparts to address what CUPW sees as a pay equity issue.

Canada Post has said CUPW’s demands are “not affordable” and would add $1 billion in costs over the life of a new contract as the postal service undergoes a review of operations, including the move away from door-to-door delivery.

CUPW national president Mike Palecek said the Crown corporation turned in a nearly $100-million profit last year and appears to be on track for bigger profits in 2016, although Canada Post has not opened its books to the union.

“We know we’re dealing with an unscrupulous employer. They have no problem lying to the public and they have been untruthful about the real financial situation facing Canada Post for years,” Palecek told a news conference in Ottawa.

A lockout would mean a halt to delivery of mail and parcels, and Canada Post wouldn’t accept any new items to send domestically or abroad. That has left companies fretting about what the impact could be on their business, school workers in Quebec hastily stuffing envelopes with report cards, and the federal government setting up contingency plans.

The Crown corporation and its union have agreed to keep delivering social benefits like old age security, Canada Pension Plan, the working income tax benefit, and the Liberals’ vaunted new Canada Child Benefit, which is set to be delivered for the first time this month.

The payments will be delivered on the 20th of the month.

Employment insurance recipients who haven’t or can’t sign up for direct deposit can contact Service Canada at 1-800-206-7218 to ask for a cheque that can be picked up at the nearest Service Canada location.