By Colin Perkel and Stephanie Levitz, The Canadian Press September 30, 2014 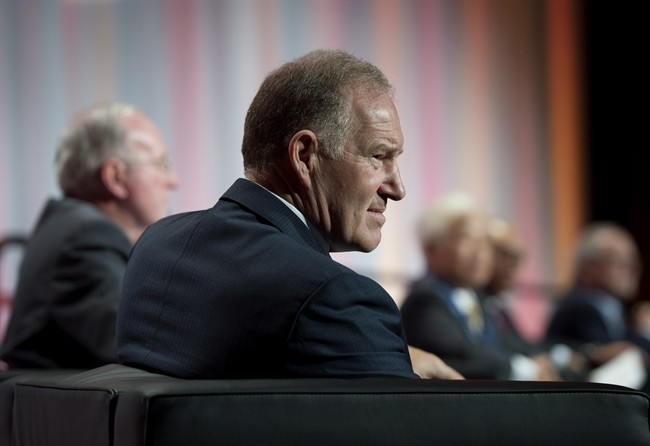 General Walter Natynczyk, president of the Canadian Space Agency, participates in a plenary session with leaders of other major space agencies at the 65th International Astronautical Congress in Toronto on Monday, September 29, 2014. (Darren Calabrese/The Canadian Press)

Canada’s refusal to allow Russian delegates to attend a prestigious international astronautical symposium has angered Moscow, which said the decision flies in the face of international space co-operation and amounts to politicizing space exploration over the conflict in Ukraine.

A spokesman for the Russian embassy on Tuesday called Ottawa’s decision to deny visas for the delegates — including one of the country’s most renowned astronauts — unfortunate.

“In this regard, we can only express regret that a number of members of the Russian delegation did not get their visas,” Kirill Kalinin, second secretary at the Russian embassy in Ottawa, told The Canadian Press.

“This act unfortunately does not bring benefit to the Russian-Canadian bilateral relations.”

Ottawa initially declined to discuss the issue, citing privacy concerns, but on Tuesday, a spokeswoman for Citizenship and Immigration Canada confirmed some applications were denied, while others were still being reviewed.

“Each will be assessed on its merits by professional, non-partisan public servants in accordance with Canada’s security and immigration laws,” Nancy Caron said in an email.

An official with Roscosmos — the Russian space agency — said only two of its 10-strong delegation received Canadian visas for the 65th International Astronautical Congress — both of them translators who were the last to apply.

On Monday, The Canadian Press reported how the absence of the Russians had blindsided the president of the Canadian Space Agency, Walter Natynczyk.

The retired general said he had only just learned about the visa issue.

“I guess I’m equally surprised,” Natynczyk said. “Before I come to any conclusions, I would like to know exactly how it transpired.”

On Tuesday, the Moscow Times said famed cosmonaut Sergei Krikalev — who spent 10 months aboard the orbiting Mir space station in 1992 — was among the Russians denied visas to attend the week-long conference in Toronto, considered the world’s biggest space gathering. The theme of this year’s event is “Our World Needs Space.”

However, Krikalev was reported as telling the TASS news agency that he simply applied for a visa too late, a point disputed by Roscosmos.

It remains unclear what Russia can do to protest the situation, given the exclusive right countries have to deny visas.

Berndt Feuerbacher, past president of the International Astronautical Federation, said he regretted the absence of the Russian and Chinese space-agency heads.

“It is just unfortunate, due to problems especially in the visa area, that we couldn’t have these delegations here. I apologize for this.”

Jack Harris, a New Democrat MP, attended the congress’ opening sessions. He said Tuesday the absence of the Russian and Chinese space leaders was keenly felt.

“I think it was significant from an international relations point of view,” Harris said.

But he noted the conference has been running for 65 years and has been apolitical, something that the visa dust-up isn’t likely to change.

“Questions were raised whether it says anything about the future of collaboration but the response by the leadership there was that they didn’t see that as a consequence,” he said.

Canada has previously taken a hard line against Russia space-wise. In April, the government called off the launch of a Canadian communications satellite on a Russian rocket citing “current events in the Ukraine.” Ottawa has yet to say when it might approve the launch, a spokesman for the satellite company said Tuesday.

The Canadian Aeronautics and Space Institute is hosting the showcase congress. About 3,000 delegates from space agencies, companies, academia and government from about 70 countries around the world, including France, South Africa and Mexico, have descended on the downtown convention centre.