Canada faces the U.S. in both teams' first preliminary round game of the world junior hockey championship 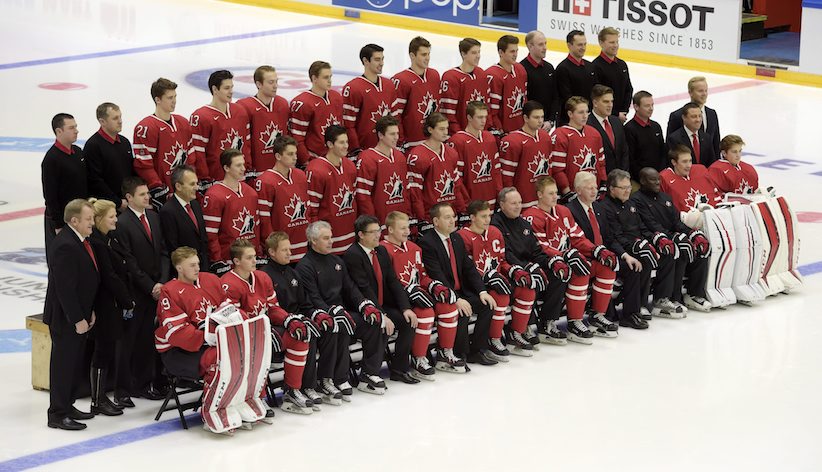 Team Canada poses for their official team photo prior to a practice in Helsinki, Finland on Friday, December 25, 2015, prior to the start of the IIHF World Junior Championship on Dec 26. Canada will face the United States in their first game of the championship. (Sean Kilpatrick, The Canadian Press)

HELSINKI — Canada faces the United States on Saturday in both teams’ first preliminary round game of the world junior hockey championship. Here are five things to watch for as Canada begins its defence of last year’s title.

Mason McDonald was expected to backup Mackenzie Blackwood as Canada’s goaltender throughout the world juniors. However, Blackwood was suspended for eight games by the Ontario Hockey League after slashing an opponent and will have to miss Canada’s first two games of the tournament. That puts McDonald between the pipes where he’s looked shaky in pre-competition exhibitions including a 5-4 shootout loss to a team of Canadian university all-stars on Dec. 12 and a 7-6 win over Sweden on Wednesday.

Brayden Point was always going to be an important piece of Canada’s world junior championship title defence. He’s one of four returning veterans from last year’s gold medal-winning squad and arguably the best player in the Western Hockey League this season. Point was given the captaincy on Thursday, saddling him with a key leadership role for Canada. Fellow world junior vets Lawson Crouse and Joe Hicketts are Point’s alternate captains.

The top five scorers in the Ontario Hockey League will be playing in this game. Americans Christian Dvorak and Matthew Tkachuk are Nos. 1 and 2 in the OHL, followed by Canadian Mitch Marner. Alex DeBrincat, the fourth-highest point getter in the OHL, will lace up for the United States, while No. 5 Dylan Strome will be on Canada’s top line centring Marner. All five players know each other exceedingly well: Dvorak, Tkachuk and Marner are all teammates on the London Knights, while DeBrincat and Strome are the core of the Erie Otters’ offence.

Auston Matthews isn’t just considered the top prospect in the upcoming NHL draft this summer but some argue he’s the best player in the world that’s not in the NHL. Instead of playing junior in the Canadian Hockey League or going to the NCAA, the American has chosen to play professionally for the ZSC Lions of the Swiss National League A. This makes international tournaments like the world juniors a rare chance to see Matthews’s talent before he breaks in to the NHL.

Canada has not won a world junior championship on European ice since 2008 in the Czech Republic. The larger Olympic-size rink is definitely a contributing factor for Canada’s struggles outside of North America, with defensive schemes, playmaking and stamina all effected. The Canadians have been practising and playing on Olympic-size rinks all month, but there’s still a learning curve. Fortunately, the Americans will presumably also be unused to the larger ice surface.