Canada was supposed to have 100 million people by the 1970s

A look at what the first statistical year book after Confederation said about Canada then, and in the future 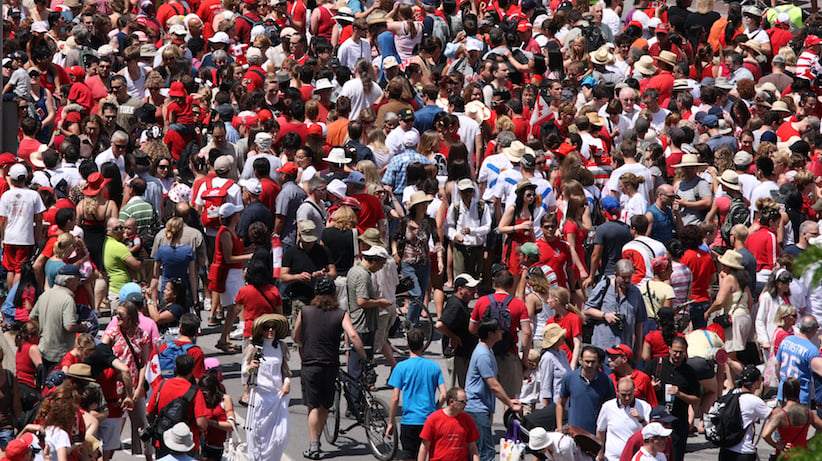 They were an optimistic lot at the dawn of the Dominion of Canada. And that was reflected in the pages of the 1868 Year Book and Almanac of Canada, the precursor to the annual year book produced by Statistics Canada today.

Drawing on population data gathered during the 1861 census, the authors believed Canada’s rapid growth at the time would continue unabated. “We may … with some pretension to probability, assume that the rate of progress of the population of all British America will be as rapid for fifty years or more as it has been for the past decade,” they wrote.

The authors then forecast Canada’s population by decade over the coming century. Here’s what their forecast looked like compared to how Canada actually grew: 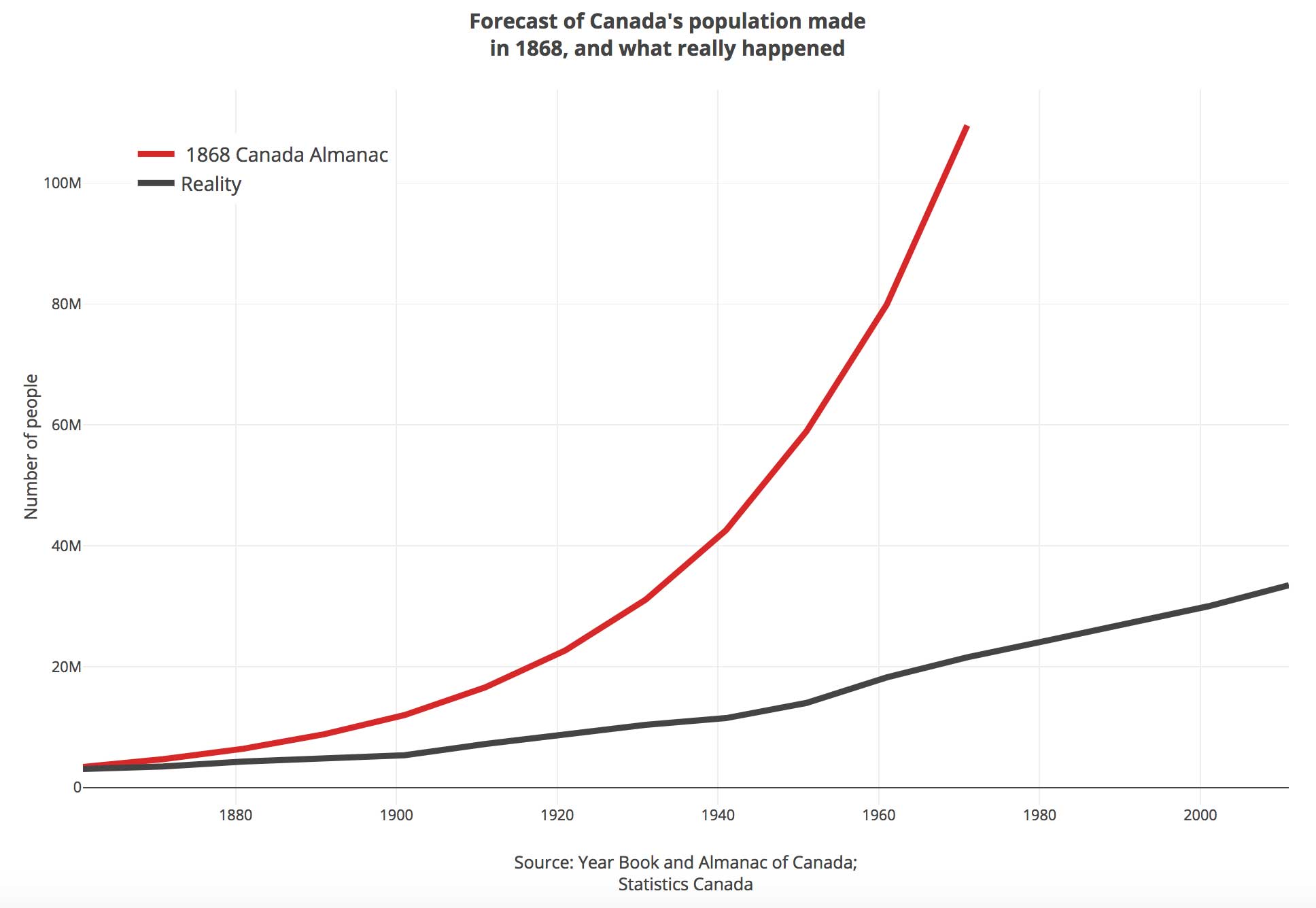 Interestingly, the idea of Canada reaching a population of 100 million remains alive, albeit delayed. The Century Initiative, a think tank headed by McKinsey & Co.’s Dominic Barton—who in turn also leads Prime Minister Justin Trudeau’s economic advisory council—has been calling for policies to triple Canada’s population over the next 100 years. To that end, the advisory council’s report last fall recommended a 50 per cent jump in the number of immigrants brought into Canada each year. “It’s a big number—to me, it’s more of an aspirational number,” Barton said of the 100 million goal at the time. “It would obviously change the country considerably. It’s a different path … But I don’t think it’s crazy.”

At the very least, the earlier call for a Canada of 100 million people shows the difficulty of forecasting so far into the future. For what it’s worth, Statistics Canada’s current population projection for the year 2063, the furthest out the agency looks, ranges from 40 million (under a low growth scenario) to 63.5 million (a highest growth scenario.) Meanwhile, the United Nations predicts a population of 50 million for Canada in the year 2100.

The potential for armed conflict with America was a motivating force for Confederation, and it was on the minds of the Year Book statisticians. They set out to estimate how many troops Canada could muster in the event of war with the U.S., and determined that with a population of 3.9 million, the Dominion could rally a fighting force of 775,000.

“In the event of war with the United States, if we were fairly supported by Great Britain, we could probably place at least one tenth of them in the field—say one hundred thousand men, and keep our active contingent up to that number from reserves. At least that is the calculation of the statist, and such calculations are usually found to be verified by actual results.”

As it was, the Year Book estimated the service militia stood at around 150,000, having expanded rapidly to repel the “Fenian marauders.” To put that tally into perspective, Canada’s military currently has 68,000 full-time uniformed troops and another 26,000 reservists.

Close to 45 per cent of Canada’s workforce at the time were farmers. Today, farmers’ share of the workforce stands at 1.6 per cent. There were also enough clergy back then to warrant a mention in the occupation counts. 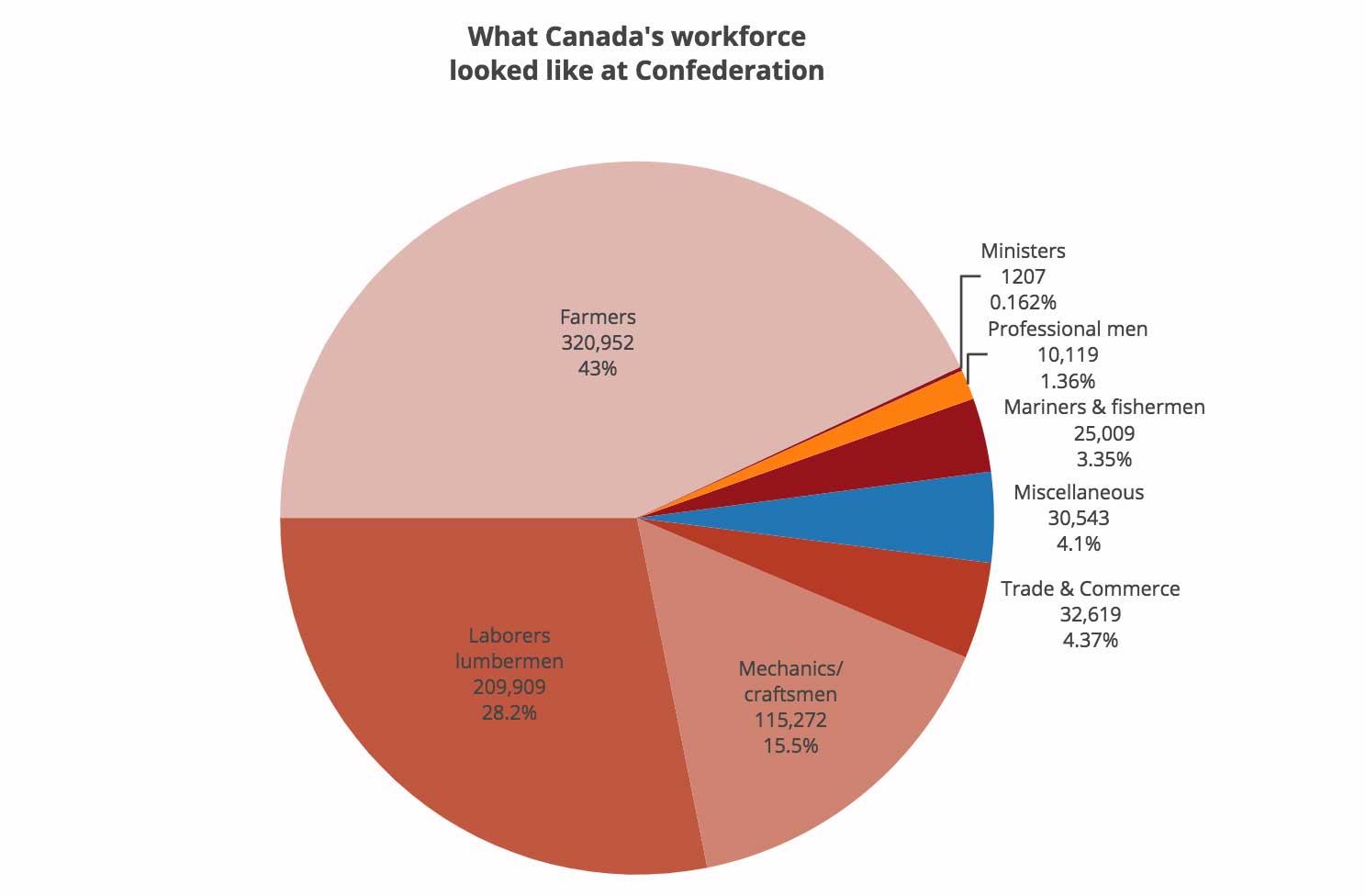 Here’s the 1868 Year Book if you’d like to explore it yourself: