Party lines on fighting Islamic State are clear in this federal election. But are we doing enough? 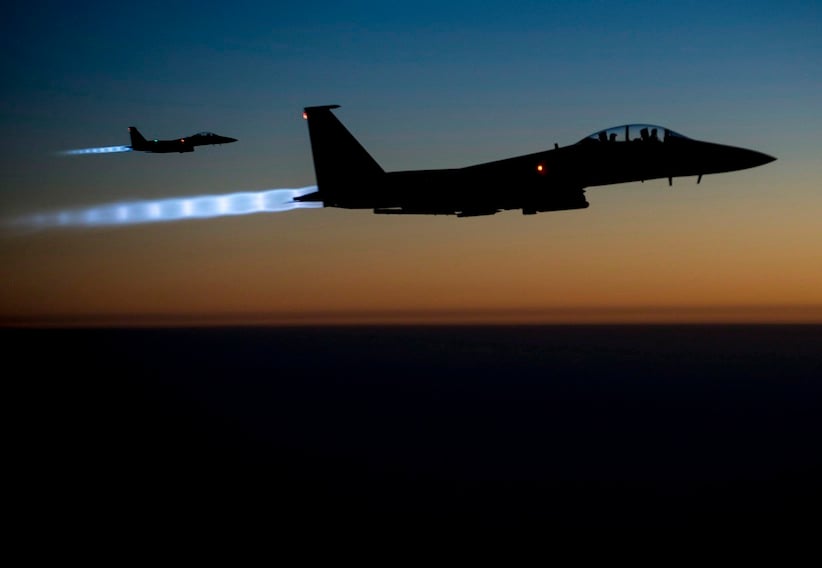 All told, nearly 700 members of the Canadian Forces are deployed in the fight against Islamic State. Most are attached to the air assets targeting Islamic State positions in Iraq and, more recently, Syria: six CF-18 fighters, two Aurora surveillance jets, and one Polaris refuelling plane. The rest, approximately 69 ground troops, are Special Forces operatives training and advising Kurdish peshmerga on the front lines.

One Canadian soldier has already come home in a flag-draped casket: Sgt. Andrew Doiron, killed by friendly fire on March 6.

A year into the mission, the party lines are as clear as any in this election. The Conservative government pushed to extend Operation Impact until March 2016—and allow Canadian fighter jets to bomb Islamic State positions in Syria, not just Iraq—and Prime Minister Stephen Harper insists that any less of a response would be disastrous. (During one campaign stop, he said humanitarian assistance without military support would amount to “dropping aid on dead people.”) If elected, NDP Leader Tom Mulcair promises the opposite: an immediate end to the mission, both bombing and training. Justin Trudeau lands somewhere in between, vowing that his Liberals will bring home the CF-18s, but boost on-the-ground mentoring in some yet-to-be-specified way.

Related: In the war against Islamic State, U.S. allies start fighting each other

Whichever strategy prevails, one thing is clear: Canada’s $500-million contribution to the U.S.-led coalition, or lack thereof, is not going to make or break the war against Islamic State. Any debate about our country’s response must acknowledge that truth. “Although our military contribution is certainly an important one, the most significant element of the contribution is political,” says Allen Sens, a political scientist at the University of British Columbia who specializes in international security. “It is Canada demonstrating that it is a reliable ally. That is not to minimize the role played by Canadian Forces, but there has to be an understanding that the scale of Canada’s contribution, in its current form, is not going to tip the balance one way or another.”

Consider the statistics. As of Sept. 14, Canada’s planes have completed 1,481 successful sorties (i.e., flights in a combat zone) over Iraq and Syria—just 2.8 per cent of the 53,278 total sorties flown by America and its allies. When it comes to actually dropping bombs, the Canadian percentage is even lower. Although the U.S. and its partners have conducted 6,700 anti-Islamic State air strikes, figures provided by the Department of National Defence show Canada is responsible for just 165, or 2.5 per cent.

Perhaps most surprising, only four of those 165 bombing runs have occurred in Syrian territory, despite Harper’s vigorous push, back in March, to expand Canada’s air contribution over the northern Iraqi border. U.S. jets, by comparison, have unleashed 2,381 air strikes in Syria.

At the same time, the overall pace of Canadian air strikes is also in stark decline, from 25 in July to 12 in August to just six in September. It’s been more than a week since a CF-18 bombed an Islamic State target—the longest lull since February.

Related: Does Canada have a place in Syria’s crowded skies?

Coalition headquarters doles out the assignments, so it’s not clear why Canada’s fighter jets appear to be carrying such relatively little weight. Experts caution, however, that air-strike stats don’t tell the entire story. Canada’s surveillance and refuelling planes have undoubtedly played a critical role, they say, and, just because CF-18s are not dropping bombs during every sortie, their mere presence in the sky has a tangible impact. “Looking at air strikes alone is not the best way to evaluate the success of a mission,” says Dave Perry, a senior analyst with the Canadian Global Affairs Institute. “By simply having that aircraft overhead—which could conduct an air strike—you’re getting a change in behaviour from Islamic State on the ground. Their expansion is significantly restricted.”

Still, Perry concedes what the overall numbers seem to suggest. “In terms of the direct impact operationally, it wouldn’t be a huge loss to the coalition if Canada ended its air mission,” he says. “I think the biggest impact would be diplomatically, because our relationships with our allies would have to be managed.”

What we’re really facing, Sens says, is “a very Canadian” campaign debate. “We are arguing about a level of symbolism,” he says. “We have to be respectful of the fact we have people deployed on the ground, and personnel who are placing their lives at risk on behalf of Canada, but, on the other hand, we need an acknowledgment that their presence is not necessarily militarily decisive. I don’t question the motive and commitment of the government of the day on this point; I think they believe Islamic State is repugnant, and that Canada must stand and do something. But what?”

Related: A refugee crisis is only part of the story in Syria

Should the Canadian military not contribute at all? Would the NDP’s promise of an immediate pullout jeopardize our clout and credibility with longtime allies? Is there a legitimate case to be made for less bombing and more training? Or less military might and more humanitarian aid?

“Whatever we’re doing in this part of the world, it’s really about choosing the least worst alternative,” says Steve Saideman, an international affairs professor at Carleton University. “I think what we’re doing now is the least worst, but one could make an argument that there are other policy stances that are less costly and slightly more positive—but that aren’t great, either.”