Canada's big year in the world of birding

Two rare 'code 5' birds have popped up in the Atlantic provinces recently, stirring up extreme bird watchers, and confounding experts 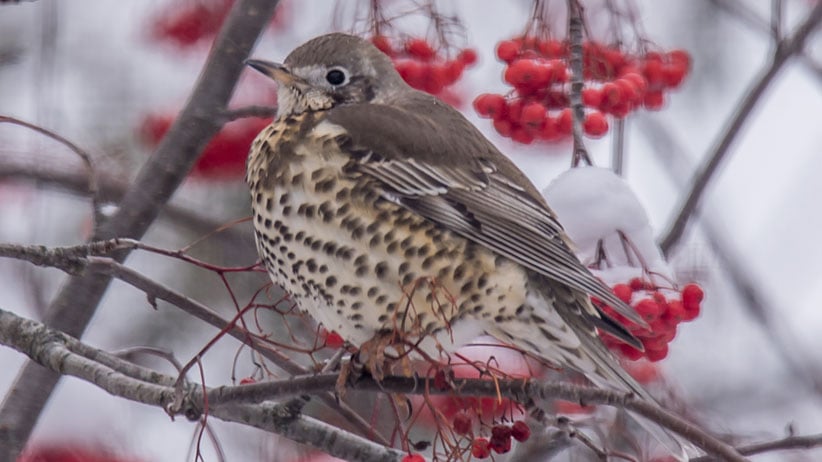 The morning of Dec. 10, Yve Morrell was in the Arizona desert chasing a nutting’s flycatcher when her phone lit up with alerts.

It was a code 5–the American Birding Association’s top category for the most unusual bird–and it had been spotted in Peter and Deana Gadd’s garden, about 5,000 km away in Miramichi, N.B.

This was a first in North America for the mistle thrush, whose usual habitat is Northern Europe.

For someone like Morrell, who hails from Florida, it may as well have been a code blue. A top contender in The Big Year 2017, the American Birding Association’s annual extreme bird spotting contest, Morrell booked it out of the dessert.

Hours later, she caught a redeye flight to Boston, hopped in a rental car and drove for 13 hours through a harrowing snowstorm before making it to Miramichi. Then, after standing in the rain for an hour, she finally saw the spotted brown breast of the mistle thrush lunching on mountain ash berries in the Gadds’ garden.

“That bird was so hard won. It seems really silly, but it is a huge, huge deal,” said Morrell who travelled over 200,000 km around the continent last year and recorded 817 birds. “The chase is so thrilling because you don’t know if you’re going to get it. You don’t know if that bird is going to be there when you show up.”

Morrell was among hundreds of avid birders from 16 states and five provinces who flocked to the small Maritime city of Miramichi over the next 10 days to see the mistle thrush. “We were warned what to expect and I am retired so there’s not a lot of pressure that way,” said Peter Gadd. “We’re meeting some very, very lovely people.”

Curiously, the mistle thrush is the second code five bird that has popped up in the Atlantic provinces in the past few months.

Nathan Swick, the editor of the American Birding Association blog, said the year of 2017 is definitely going down in history as a big birding year, though the reason behind it remains up in the air. “Sometimes birds just end up here and there’s no way to really know why or how they get here,” said Swick. “Who knows how long it’s been here. Who knows how long it will stick around. We’re just really fortunate that it ended up in the right place where someone knew enough to key in on it.”

There are, however, a few theories as to why these strange birds are landing on the wrong continent. David Phillips, a senior climatologist for Environment Canada, said one possible explanation is the foreign birds were set off course as a result of Hurricane Ophelia, which formed Oct. 9 and dissipated Oct. 20. “It was the farthest east that a major hurricane has ever gone in the Atlantic Ocean,” said Phillips.

Becky Whittam, the head of terrestrial and marine unit of the Environment and Climate Change Canada’s Canadian Wildlife Service, said these rare birds might have a genetic issue that caused them to fly in the wrong direction, or their arrival could be caused by a combination of weather and genetics. “It’s impossible to know really,” said Whittam. “The normal pattern of vagrancy would be birds from North America showing up in Europe, not European birds showing up in North America because of the prevailing winds, which are generally west to east across the Atlantic.”

Another factor, Whittam points out, is there are more birders than ever and they’re really well connected through social media.

David Bell, an Acadia University master’s student studying passerine vagrancy, thinks birds ending up in the wrong spots has more to do with the weather than genetics. In the case of the mistle thrush, his theory is that a system of strong winds between Nov. 19 and 23 blew the bird off its usual migration pattern from Scandinavia to the United Kingdom, offshore towards Eastern Canada.

“Then it just rode the wind currents until it landed in Labrador. When the weather turned up there, it just kept moving until it ended up in Miramichi,” Bell surmised.

Morrell, meanwhile, finished her Big Year having recorded the most birds in the U.S. and Canada in 2017, according to the American Birding Association.

“It is totally crazy,” said Morrell, 59. “I’ve been involved in a lot of competitive sports in my life. Nothing is competitive as birding.”