Liberals announce that the complement of military personnel in the region will climb to 830, up from the current 650 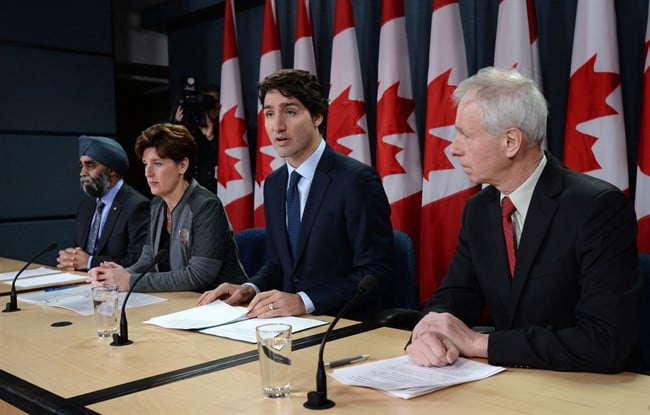 OTTAWA – Canada’s fighter jets will end their fight in Iraq and Syria within two weeks, and be replaced by what the Liberal government is calling an expanded mission focused on training local security forces and helping to rebuild the shattered region.

Canadian bombs will stop falling by Feb. 22, but the complement of military personnel in the region will climb to 830 — up from the current 650 — and will provide planning, targeting and intelligence expertise.

The size of Canada’s “train, advise and assist” mission will also triple, including additional medical personnel and equipment including small arms, ammunition and optics to assist in training Iraqi security forces.

“We think we ought to avoid doing precisely what our enemies want us to do: they want us to elevate them, to give in to fear, to indulge in hatred,” Prime Minister Justin Trudeau told a news conference Monday.

“The lethal enemy of barbarism isn’t hatred, it’s reason. And the people terrorized by ISIL every day don’t need our vengeance, they need our help.”

Canada learned the hard way during 10 years in Afghanistan that airstrike operations, while useful in the short term for “military and territorial gains,” do not on their own result in long-term stability, said Trudeau.

They can also be politically expedient, he suggested — a subtle jab at his Conservative predecessors who sent the jets into Iraq and Syria in the first place.

Canada’s gained a lot of valuable experience training local Afghan police and military forces during a decade spent fighting in that country, he added — experience that the Canadian Armed Forces should be bringing to bear in Iraq and Syria.

The new Liberal mission will also include a team of strategic advisers to help Iraq’s defence and interior ministries. Canada’s CC-150 Polaris refueller and two CP-140 Aurora surveillance planes will remain part of the operation.

The time frame of Canada’s contribution to the mission against the Islamic State of Iraq and the Levant, known as Operation Impact, is also being extended until the end of March 2017.

Trudeau said Monday the government would be spending more than $1.6 billion over the next three years on the mission as a whole, including on security, stabilization, humanitarian and development assistance in the region. That includes $840 million to provide water, shelter health care, hygiene and sanitation, and $270 million to build capacity in those countries helping refugees from the region.

Canada has already committed $650 million in humanitarian aid for people affected by the Syrian civil war and $233 million for longer-term development. It wasn’t immediately clear whether those figures were part of the larger $1.6-billion total.

Trudeau’s announcement comes days before Sajjan is due to leave for Brussels for a meeting with his NATO counterparts on Feb. 10-11.

The U.S. has publicly said it respects Canada’s decision to pull its fighter jets out of the air campaign. But the Americans chose not to invite Sajjan to two impromptu coalition meetings in Paris, which the newly minted defence minister shrugged off.

Sajjan said there are meetings being held constantly around the world to discuss threats.

That hasn’t stopped the opposition Conservatives from criticizing the Liberals for planning to withdraw the fighter jets, which were sent to the Middle East when the Tories were in power.